After Airbnb announced it was preemptively canceling and blocking all rentals in Washington, D.C., this week for President-elect Joe Biden’s inauguration, other companies and homeowners are feeling the pressure to do the same.

With one day remaining until Biden is inaugurated as the 46th President of the United States, the question of the role that individual homeowners, rental platforms and hotels play in preventing the kind of violence that left five people dead when rioters stormed the Capitol on January 6 is still dividing locals.

On January 13, Airbnb announced it was blocking anyone from using its platform to reserve a stay in the wider D.C. area for the week of the inauguration. Existing reservations would also be canceled, with both the host and the guests receiving refunds.

“We are continuing our work to ensure hate group members are not part of the Airbnb community,” the company said at the time.

The decision had been applauded by James Benson, a Salesforce consultant at a local nonprofit who started the #DontRentDC campaign on Nextdoor and Twitter after scrolling the latter and seeing neighbor reports of rioters staying in his Mount Pleasant neighborhood. He hoped his campaign would be one way to help prevent another round of riots and, in particular, protect neighbors he described in an email to Inman as “BIPOC,” or Black, indigenous and people of color.

“Shortly after, I read that a second deadly insurrection was planned for Inauguration Day,” Benson told Inman. “I decided to create the hashtag #DontRentDC and coordinated with my friends […] to get it trending on Twitter in attempt to protect the city of DC, our neighbors (especially our BIPOC neighbors), and our democracy.”

Since Benson began the campaign, numerous locals and non-locals have been asking other rental platforms to follow Airbnb’s lead and prevent people from using their services to book stays in D.C. during the inauguration. Other rental companies, however, have had different responses. Booking platform HotelTonight, which Airbnb purchased in 2019, announced it was also blocking and canceling all reservations.

By the afternoon of January 19, Expedia Group, a booking company that owns vacation platform Vrbo, also announced that it would be blocking all new reservations for the D.C. area through January 22 while requiring all who already have reservations to re-confirm their ID amid new guidance from government officials. (The company had initially announced increased screening and security measures but not a full-on block.)

No major hotel chain has announced plans to block the inauguration even if some smaller boutique hotels like The Eaton D.C. had.

While most of the discussions around whether to rent or not to rent took place last week, the issue is salient now because, to avoid being tracked, many of the people coming to the inauguration with bad intentions may be booking at the very last minute. Some have already turned toward Craigslist to get around the Airbnb ban. Words like “Patriot” and “Inauguration Ready” are used by some homeowners to specifically attract Trump supporters. 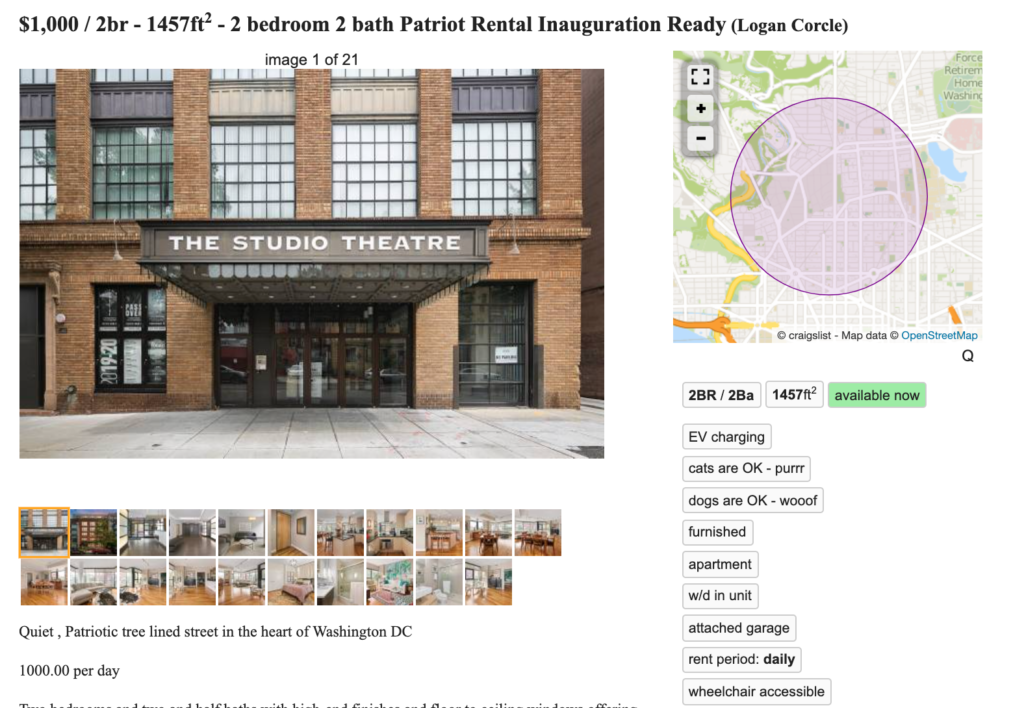 As pointed out by many on social media, corporations have a greater responsibility to prevent violence and stop people from coming to D.C. during an extremely high risk of violence as well as a pandemic that still hasn’t been curbed.  That said, the decision to rent or not to rent can also rest with the individual homeowner and property manager.

Activists from #DontRentDC and #ShutDownDC, another group of volunteers that had been pressuring Airbnb to cancel rentals, have taken advantage of many different ways to stop individual D.C. homeowners from renting — from writing social media posts and putting up posters around town to finding ads for rooms and messaging individual owners.

The news has angered some owners, particularly those who put up rooms specifically targeting Trump supporters, on social media but activists and local lawmakers believe the move is for everyone’s greater good. As first reported by Wired, one Airbnb host approved a reservation for the top floor of his DC house for what they described as a “history sightseeing trip” only to find a group of people in pro-Trump clothes coming out of his front door on January 6.

DC! Avoid renting out rooms on January 17-20. There’s no way to guarantee that your guests are not coming to incite violence. The potential threats publicized by news outlets are very alarming. Please protect your neighbors and the District from more attacks. #DontRentDC https://t.co/cGCDGQhA8d

“Individual homeowners that make a secondary income off of their short-term rental properties can delist them and cancel already booked reservations – put your neighbors above your wallet,” Benson said. “Larger companies: the previous sentence multiplied by 1 million. I understand that the pandemic has resulted in a huge loss of revenue for most hotel chains but I believe a week’s shutdown is a drop in the bucket. We all need to put the wellbeing of our democracy over our individual needs.”

UPDATE: This story has been updated to reflect Vrbo’s decision to block new reservations in and around Washington, D.C. through Friday.