Last week, the Wall Street Journal ran what sounded almost like an obituary for mortgage stocks.

“Investors,” the Journal argued, weren’t “convinced” the stocks were a good buy. And the “mortgage IPO boom” was “petering out.”

But then, just days later, something weird happened: shares in both Rocket Companies (Quicken Loans public label) and LoanDepot skyrocketed. And then a day after that, the gains evaporated and the share prices plummeted back down.

As it turns out, so-called “meme traders” from online message board Reddit were partly responsible for the volatile price movement. And while by the end of the week prices were close to where they started seven days earlier, the wild week of trading complicates the idea that investors have collectively shrugged at mortgage stocks; in just the past several days, a large enough multitude of traders did exactly the opposite, to the extent that they reshaped the share’s performance.

This week consequently raises an interesting question: Are mortgage stocks the new GameStop? And what happens when meme traders go after mortgage stocks?

GameStop is a chain of retail stores based in places like malls. Investors have long had a dim outlook about the company, with many betting its stock this year would lose value. However, beginning in January a community of smaller-scale investors from Reddit realized they had strength in numbers and started buying up shares in the company. Their activity eventually drove the price up by more than 100 percent, making some of them millionaires in the process. The share prices eventually fell again, but not before the incident became one of the biggest news stories so far of 2021.

That’s also more or less what happened to Rocket this week, though to a lesser extent. To try to understand if mortgage stocks were the next GameStop, Inman talked to experts, looked at data and combed through Reddit. The takeaway is that mortgage companies are probably not going to see the volatility or gains of GameStop. But at the same time, it’s also too early to write their obituaries.

The case for malaise

The Journal’s argument that mortgage stocks have had a recent lackluster run is compelling.

It is true, for example, that mortgage companies have scaled back their recent initial public offerings (IPOs). As Rocket Companies — which is by far the largest of the newly public mortgage companies — prepared to go public last August, it set its initial share price at $18. That was a downgrade from the $20 and $22 range the company had hoped for.

LoanDepot similarly downgraded its IPO. And, as the Journal noted, other anticipated IPOs have been scuttled altogether, such as that of AmeriHome Mortgage Company which will now sell to a bank.

It’s also true that recent weeks and months haven’t been particularly kind to publicly traded mortgage companies. After debuting in August, for instance, Rocket shares popped to more than $31, before quickly falling into the low $20 range where they languished for months. LoanDepot only went public in February, but followed a similar trajectory, with an initial jump and then a subsequent period of investor malaise. 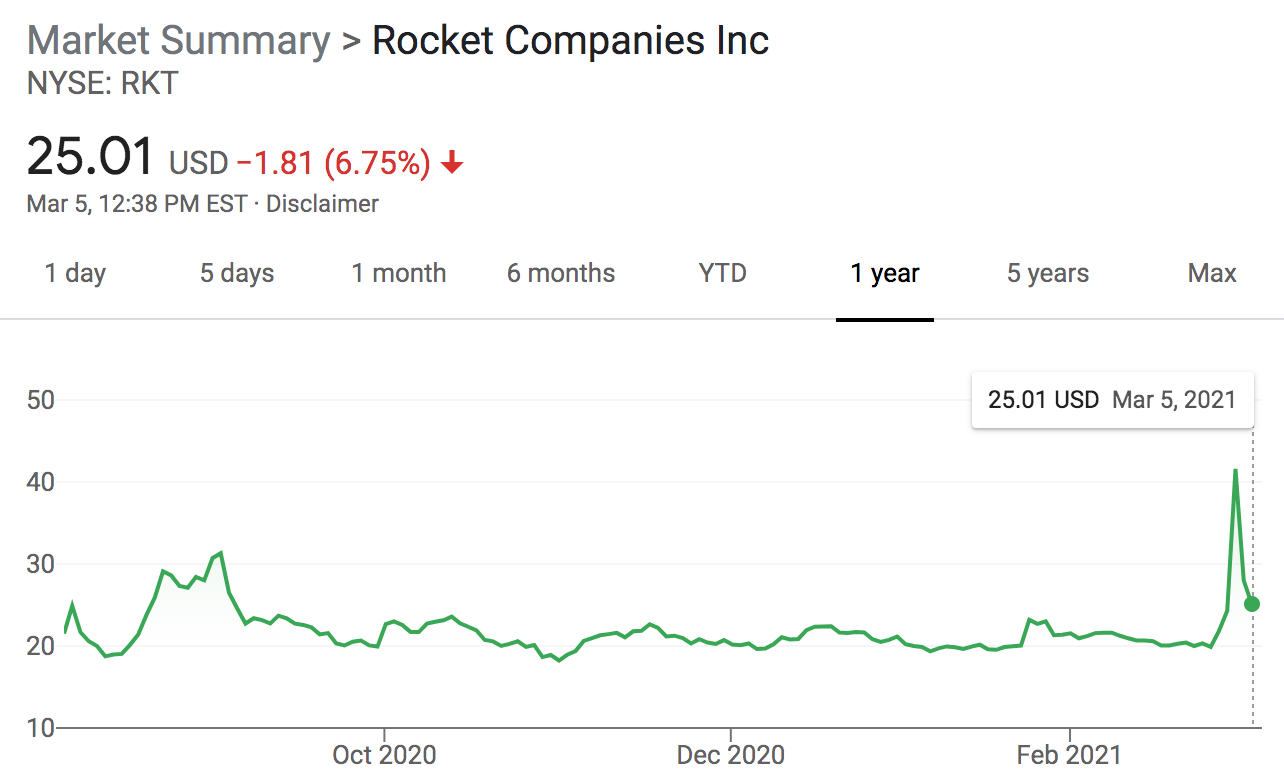 One possible reason for this relative lack of interest in mortgage stocks among investors was the specter or rising mortgage rates.

Though the housing industry generally has been on fire since last summer, the yield on the 10-year Treasury note has also steadily been climbing. Those yields tend to move alongside mortgage rates, and the upward movement suggested mortgage rates would eventually start climbing as well — something that could undermine the profitability of non-bank mortgage companies. 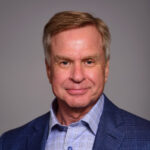 “Investors have always been skeptical about mortgage companies, they consider them very cyclical,” Guy Cecala, CEO and publisher of news and analytics firm Inside Mortgage Finance, told Inman. “They do well when the housing market does well. They don’t necessarily do well in slower times.”

Cecala went on to explain that Rocket has done relatively well, but that other firms have had “kind of mixed success.”

“So far it seems like the door is quickly shutting on new” initial public offerings for non-bank mortgage companies, Cecala continued.

Taken together, these factors do make the case that mortgage stocks had flopped for the time being. The conventional wisdom would be that investors’ appetite for mortgage stocks is small.

But these are not conventional times.

The pop in Rocket and LoanDepot share prices happened just days after the Journal piece, and seemed initially to perplex observers. As it was still happening, for example, CNBC wrote that the price movement took place on “no apparent new news.”

However, as Inman has previously reported, it quickly became clear that Reddit was driving the price increases. Reddit investors are often called “meme traders” because some are less motivated by the financial performance of a company than by jokes and a desire to thwart larger institutional investors. When they bid up the price of GameStop stock earlier this year, for example, some reveled in “YOLOing” their life savings (YOLO is short for “you only live once”). And there was an almost anarchist glee among many meme traders when their actions began costing hedge funds billions of dollars.

Inman identified thousands of comments on r/WallStreetBets, the meme traders’ primary place to congregate, that referenced Rocket Companies around the time that that firm’s stock jumped in price. One of the more popular comments was “Rocket to the moon,” which is a particularly convenient combination of Rocket’s name and the Reddit trading mantra “to the moon” that is used for many companies.

There were considerably fewer comments about other mortgage company stocks. However, Cecala suggested that the same phenomenon was likely fueling the pop in share prices for other companies, such as LoanDepot, because investors who liked Rocket might be doing some research to find companies in Rocket’s same space.

To better understand how the mortgage sector compared to GameStop, Inman reached out to Alex Merrill, a senior manager at data analytics and artificial intelligence firm Accrete. Among other things, Accrete analyzes online chatter and identifies patterns within that chatter. 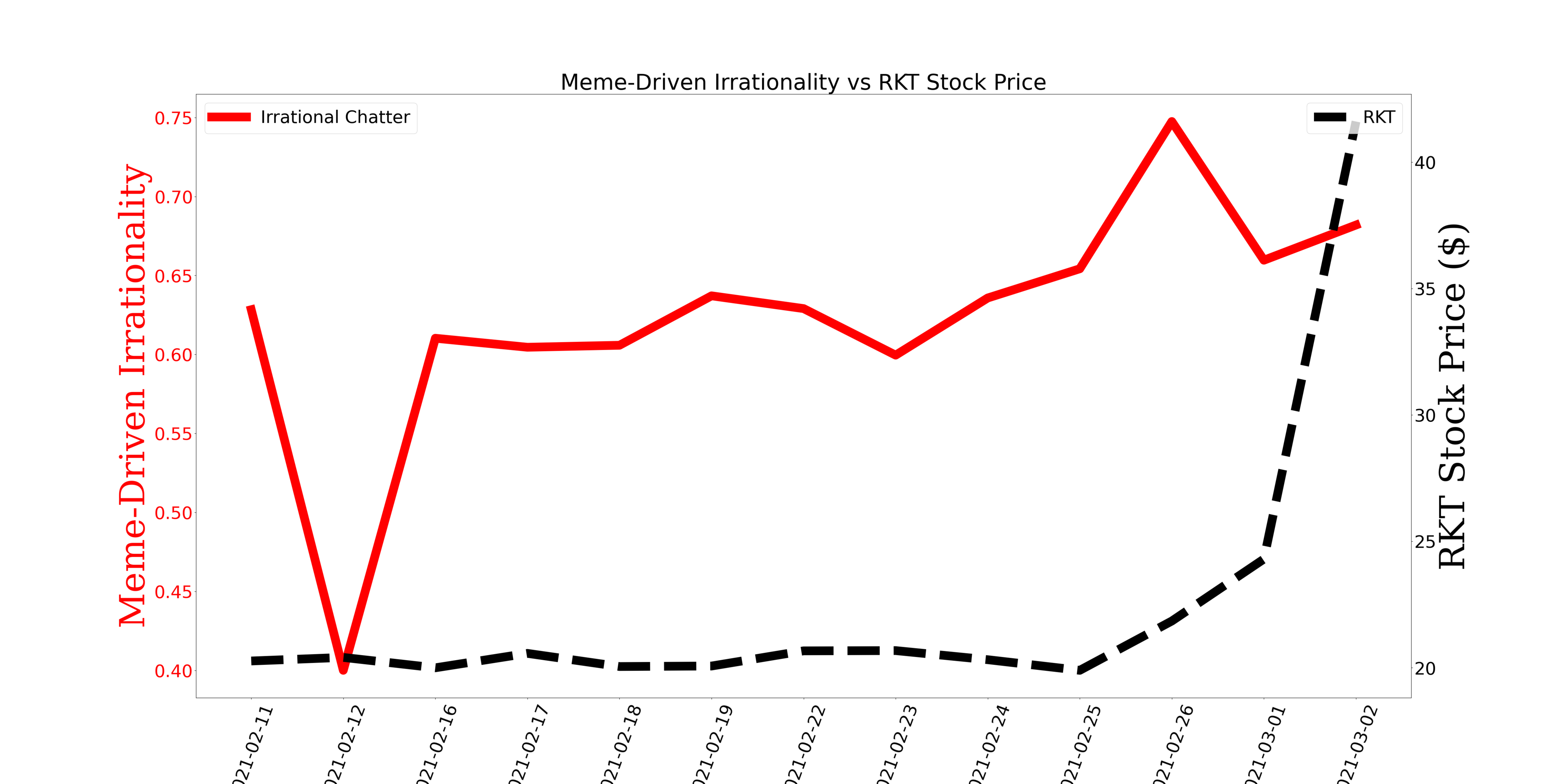 The graph assigns a numerical value to the level of cohesion among online mentions of a stock at a given time, which is what the lefthand Y axis shows. And Merrill explained that “irrationality” happens when comments start aligning and everyone starts saying more or less the same thing.

As the graph shows, there was a spike in irrationality right before the stock price jumped. 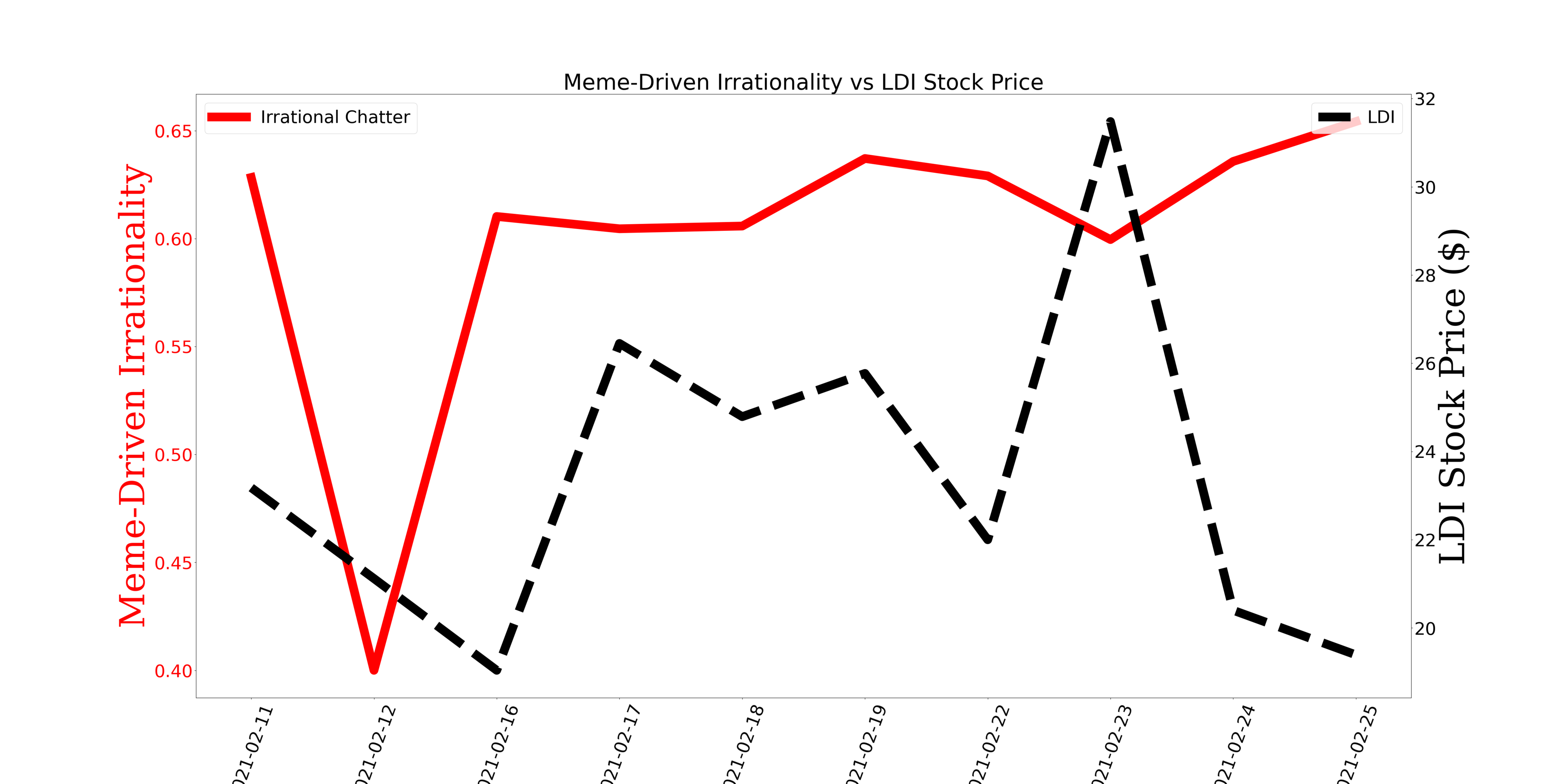 And finally, here’s one for UWM Holdings Corp, which is a mortgage wholesaler. 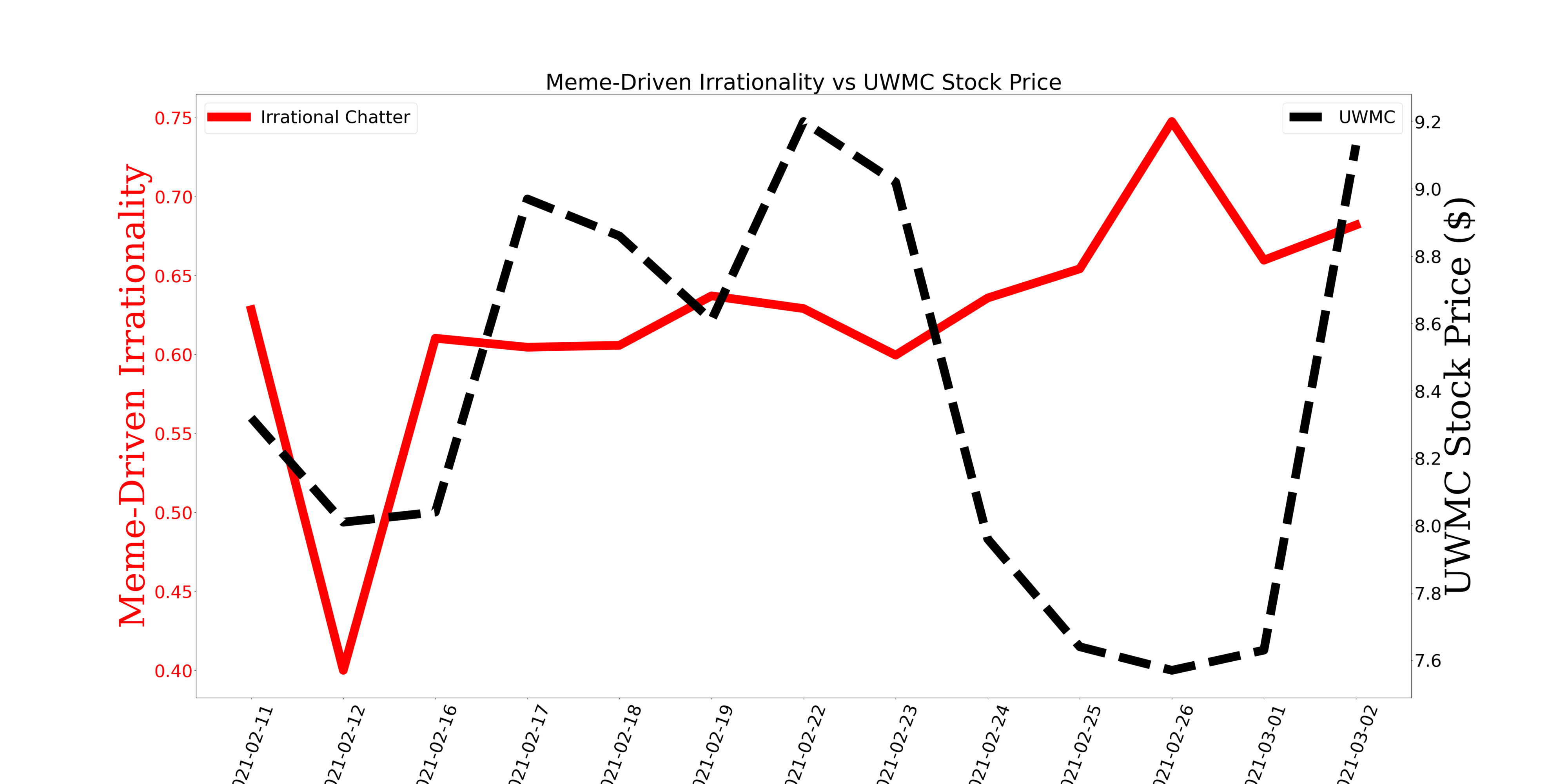 The date ranges on these graphs are not all the same, but they do indicate a relationship between irrational online chatter — or, what happens in r/WallStreetBets — and stock prices.

However, here’s what GameStop’s graph looks like for the period when meme trading of the company’s shares was most active:

As that graph shows, there was a bigger and more sustained spike in irrational chatter about GameStop than there was for any of the mortgage companies. Merrill further noted that chatter about Rocket never ultimately overwhelmed the Reddit community the way GameStop did. It didn’t become the same kind of juggernaut. 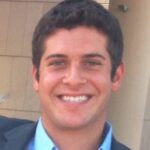 “Compared to what we saw with GameStop,” he explained, “there was more independent thought, more thought from outsiders.”

These findings suggest, first, that mortgage companies are not the next GameStop.

But, second, these stocks also hold some appeal to meme traders, who have the power to influence their prices. All of which is to say, the past seven days or so have highlighted how unpredictable stock trading can be in a meme world, and how you can’t write the obituary for a stock too soon.

Either way, though, the outcome of this episode is probably for the best for the mortgage companies. Cecala said that the risk of truly becoming the next GameStop is that one company’s share prices spiking could taint the shares of other companies and send volatility-adverse traders running.

“That’d be bad news,” he added when asked about Rocket or another company truly following a GameStop trajectory. And, he said that a company like Rocket is just financially in much better shape than other meme stocks anyway.

“They could afford to see a 20 percent drop in business and still be very profitable,” he noted. “Rocket, and Quicken, is more of a diamond in a jewelry store than a diamond in the rough.”

How These Agents Found Success In The Face Of Tragedy

By admin
13 mins ago

The Luxury Key For 2023? Maintain Relationships And ‘Be Obsessed’

How These Agents Found Success In The Face Of Tragedy

The Luxury Key For 2023? Maintain Relationships And ‘Be Obsessed’