Property investors rode a wild wave during the pandemic, with the short-term rental market stopping, then restarting, and property prices in many second-home markets soaring. What does the future hold for new second-homeowners and for managers of more robust property portfolios? We’ll explore that and more, all May long, at Inman.

The figures mark the first month since March 2020 where demand exceeded those levels seen in 2019.

At an international level, the U.S. was the only country out of the 10 largest countries for STRs that saw a month with positive demand. Mexico was the country that saw the least poor performance in short-term rentals during April, with demand down just 3.4 percent from April 2019 levels. By contrast, in Italy, which was severely hit by the pandemic, short-term rental demand was down 62.7 percent compared to April 2019.

The U.S. short-term rental recovery is widespread too, according to AirDNA’s data. Out of the 265 markets the company tracks in the U.S.,  201 of those markets had April 2021 demand surpass demand levels from April 2019. Dense metro areas, however, are still seeing demand far below 2019 levels. New York (down 74 percent from April 2019), Boston (down 74 percent) and Washington, D.C. (down 65 percent) all still have a long way to go in terms of the short-term rental market recovery.

April short-term rental demand often sees a dip following spring break surges in March. However, this year, with vaccines rolling out and travelers getting back out there, April demand surpassed that of March: Occupancy levels in April were 61.6 percent, compared to 60.9 percent in March. Month-over-month demand growth was strongest in Gatlinburg/Pigeon Forge, Tennessee (up 69 percent); Gulf Shores/Mobile, Alabama (up 42 percent); and Myrtle Beach, South Carolina (up 42 percent).

Many U.S. markets, particularly beach locations, are also already largely booked for the summer. As of early May, Santa Rosa/Rosemary Beach and Panama City, Florida, as well as Hilton Head, South Carolina, are already over 80 percent occupied for June 2021.

With some urban areas having dropped more than 25 percent of their listings in response to lower demand (New York, Los Angeles, Boston), short-term rental platforms have made up for that loss by adding listings in other locales. Destination and resort markets have added about 12 percent more listings than prior to the pandemic’s start while small cities and rural areas have added about 34 percent more listings compared to pre-COVID. 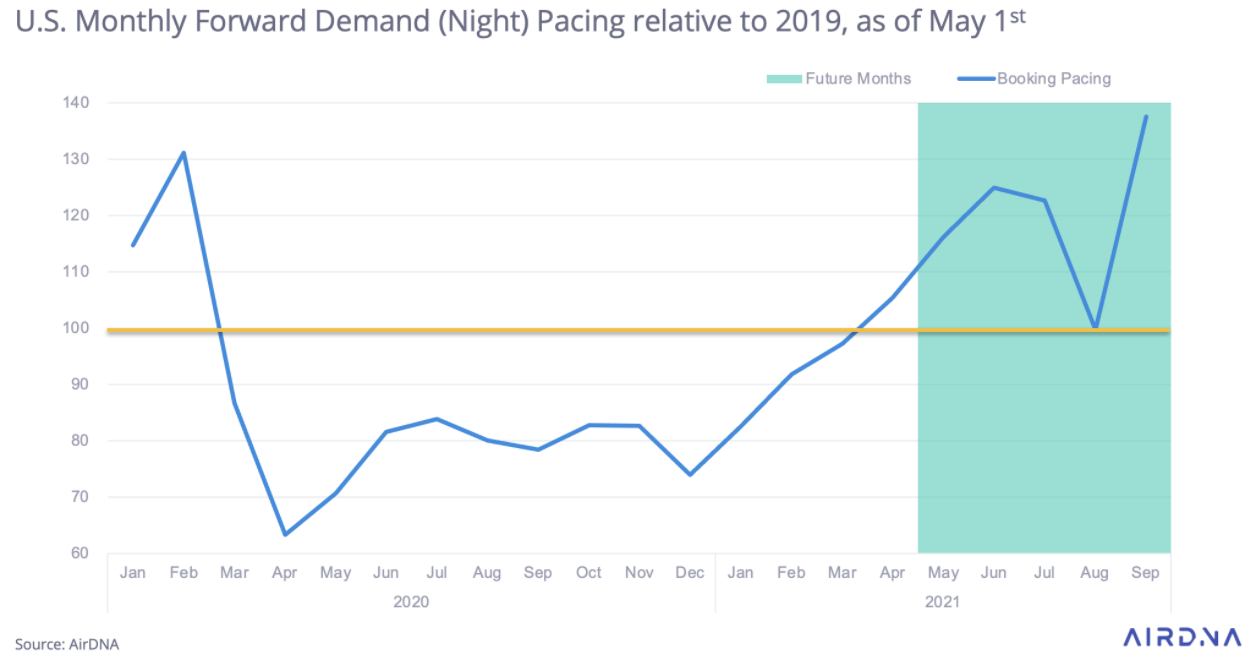 This summer stands to be the busiest ever for short-term rentals, with all summer months now seeing booking demand above 2019 levels.  As of the beginning of May, June bookings were 25 percent higher than during the same period in 2019. However, AirDNA noted that as countries around the world continue to recover over the next year, U.S. short-term rental demand levels will likely resume more normal (less high) activity levels by summer 2022 as travelers start to explore international destinations again.