Nationwide rent prices rose 3.8 percent year-over-year in December, continuing an upward trend that has been largely unaffected by the pandemic.

According to the latest Single-Family Rent Index report released by CoreLogic on Tuesday, rental prices across the country are up 0.9 percent compared to last year. While there was a dip in prices during the very early months of the pandemic, the cost of renting a home has continued to climb at unprecedented rates throughout both the coronavirus and subsequent unemployment crises — rental prices are now growing faster than they were before the pandemic.

“In the final months of 2020, single-family rents posted the highest increases in over four years,” Molly Boesel, principal economist at CoreLogic, said in a prepared statement. “However, single-family rent price reaction to the pandemic and resulting recession differed greatly across metros. While rents in the Southwest U.S. strengthened, in some areas of the country — in particular, areas relying heavily on tourism — rents softened.”

Single-family homes saw the biggest demand, and therefore, the biggest increases in prices, while condos in urban multi-family units were one of the only types of real estate to see prices drop somewhat. 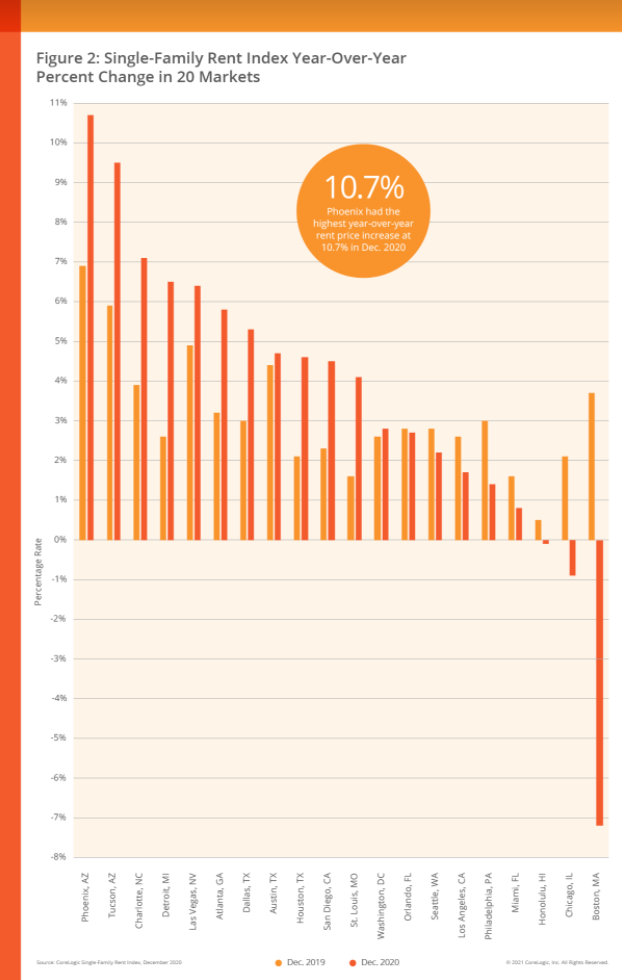 Cities that were already exploding in demand pre-pandemic have continued to see astronomical growth throughout while those that relied heavily on tourism or a large student population were the ones to see major price drops. Two Arizona cities, Phoenix and Tucson, saw the biggest increases in rental prices, at 10.7 and 9.5 percent respectively, with Charlotte, North Carolina, coming in third with a 7.1 percent increase. Boston, meanwhile, saw the single biggest decline at 7.2 percent.

While the current outlook has been caused by many factors, the biggest influences are record-low mortgage rates coupled with a very small numbers of homes on the market. Widespread pandemic-induced unemployment and similarly high home value growth have pushed many renters into a vicious circle of having to shell out high prices for rent while not being able to save for a down payment and finally make the jump to homeownership.

“As states begin managing the administration of vaccines as well as mitigating continued unemployment concerns, rent prices will likely continue to experience mixed growth rates in metros across the nation,” reads the CoreLogic report.

CoStar Makes Another Play To Buy CoreLogic For $7B

How to Become an Entrepreneur in 6 Steps