Rental arbitrage is when an individual rents a property long-term and then rents it out to someone else short-term. A new report found that less densely packed coastal destination markets are prime locations for arbitrage in 2021.

Urban rentals have taken a hit in the wake of the pandemic, but recent positive rent growth shows that opportunities remain in the market for individuals interested in rental arbitrage this year, according to data from data analytics/property management software company RealPage Market Analytics and short-term rental analytics company AirDNA.

In June, long-term rental rates grew more than 10 percent year over year in 53 of the 150 largest U.S. metro areas, according to the report, “Short-term, Multifamily Rental Arbitrage in 2021,” sent to Inman and published on Tuesday.

Rental arbitrage is when an individual rents a property long-term and then rents it out to someone else short-term on a site like Airbnb or Vrbo. For this report, RealPage Market Analytics and Migo by RealPage provided data on long-term rental rates and occupancy levels from 2016 to 2021, while AirDNA provided the same data for short-term rentals, both across the 34 U.S. markets (and their submarkets) with the most short-term rentals.

According to the report, the number of multifamily listings overall only declined by 2 percent from Q2 2019 to Q2 2021. However, densely populated coastal cities saw significant declines in listings, with drops by more than 25 percent in places like Boston, Los Angeles and New York, while other more spread out inland cities saw substantial gains. San Antonio and Dallas, Texas, and Jacksonville, Florida, for instance, saw an increase of more than 40 percent in new listings during the same period.

Historically, the change in average revenue per listing in the long-term and short-term rental markets largely operated independently of each other, mostly yielding a positive average rental arbitrage opportunity, according to the report.

However, COVID upended that trend. Higher vacancy rates and lower effective rents (how much income a landlord brings in after any concessions given to a tenant) in those pricey coastal markets like New York and San Francisco led to a drop of 10 to 25 percent in average effective rent over the last year, which also resulted in a sizable drop in revenue earned by short-term rentals during the same period.

At the opposite end of the spectrum, coastal destination markets that are less densely populated saw a 20 percent increase in demand for short-term rentals during the second quarter of 2021 compared to the year before. That demand has allowed for greater revenue earning potential in those markets since their apartment rents have only increased slightly over the last year. 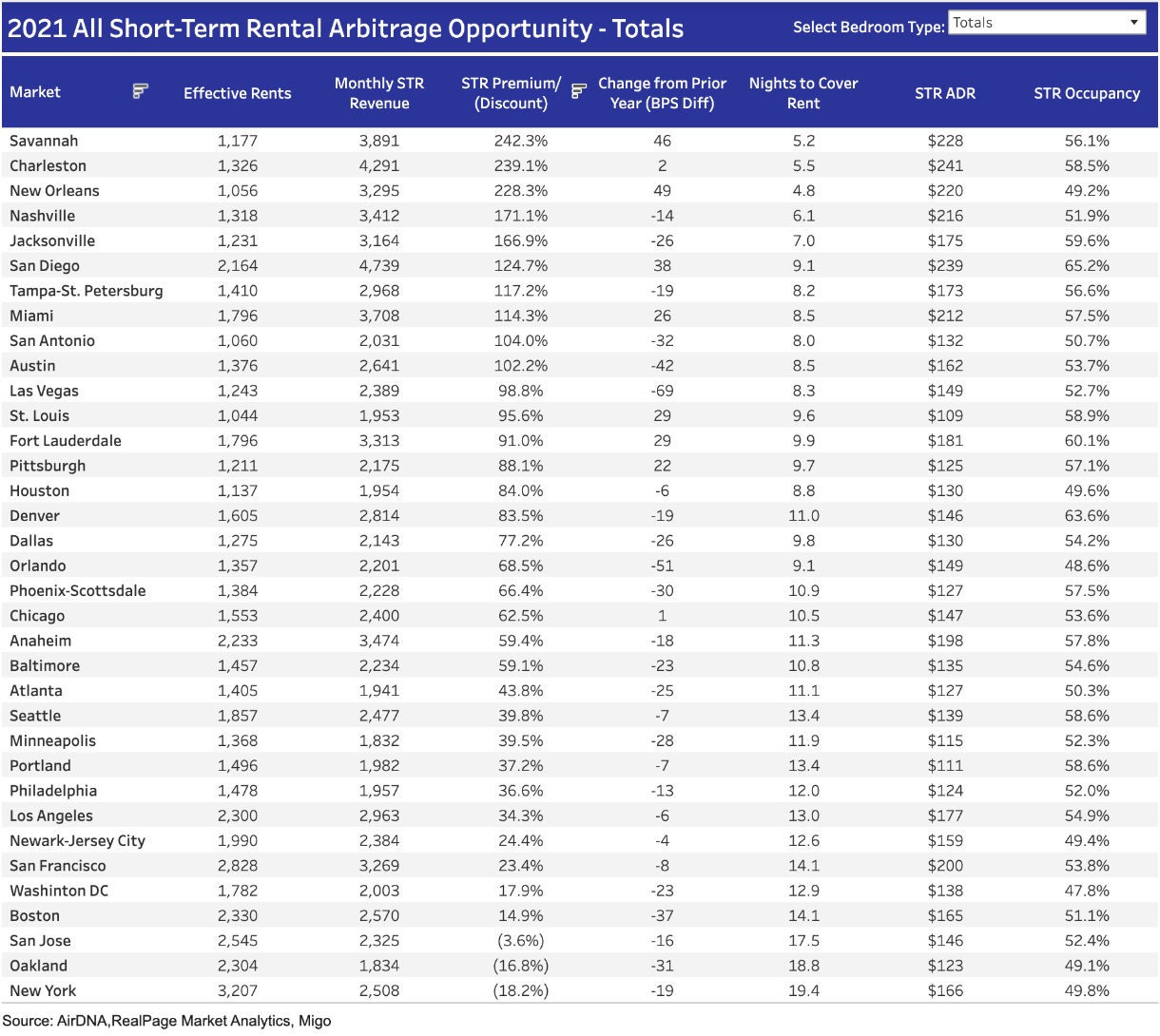 In Savannah, for instance, the effective rent rate is $1,177, but renters looking to take advantage of arbitrage opportunities can bring in about $3,891 in monthly short-term rental revenue. Likewise, big gains are to be had in Charleston, where the effective rent is $1,326 but renters there who seize arbitrage opportunities stand to gain about $4,291 in monthly short-term rental revenue. (The report’s analysis does not take into account expenses of starting and running a short-term rental, however.)

San Diego is a surprise market to reach the top of the list this year in sixth place, due to short-term rent growth in the city outpacing long-term rent growth at a rate of 10 percent versus 4 percent.

Generally, across all markets, larger units provide a greater opportunity for premiums on short-term rentals. Short-term rental premiums start at 46 percent on studio apartments and can be up to 140 percent for apartments with three bedrooms or more.

RealPage and AirDNA also have an online tool through which renters can see what opportunities exist for bringing in short-term rental revenue based on their specific market and number of unit bedrooms. 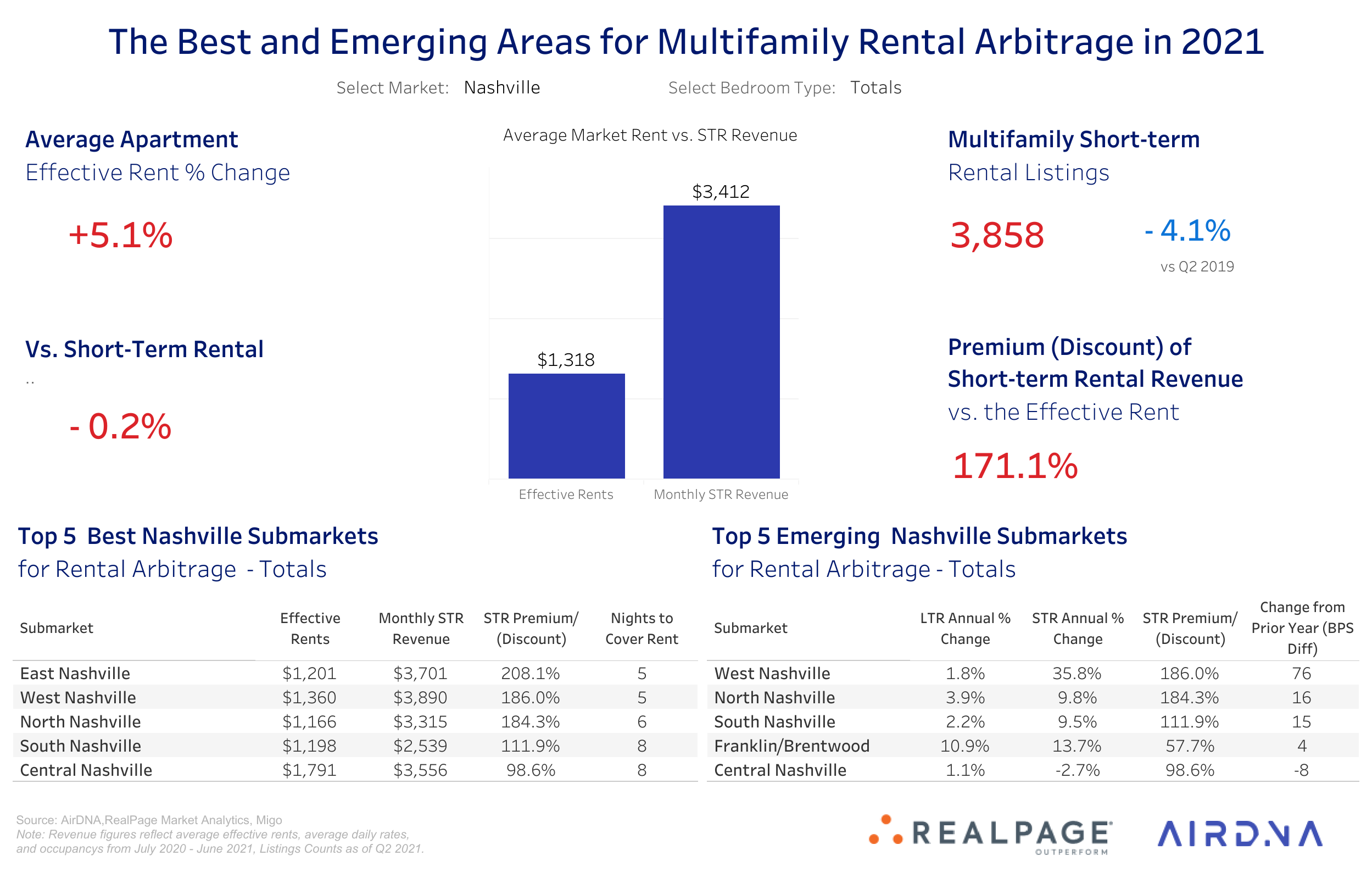 RealPage and AirDNA’s data further suggests that rental arbitrage can be worth it even on a part-time basis, since in some markets, like Nashville, an apartment only needs to be rented out for about five nights per month in order to cover one month of rent.

However, as the report notes, it’s important for anyone who is considering rental arbitrage to clear it with their apartment owner and make sure formal agreements are in place to protect everyone involved. But, if framed in the right way, building owners may be persuaded that it’s good for their business too.

“Many apartment owners understand that a resident’s rental arbitrage business brings increased occupancy, meaning more income for both the long-term renter and, in turn, themselves,” the report reads. “Rental arbitrage allows apartment owners to share in profits from these opportunities. It also enables them to diversify their rental income.”

How Agents Can Reach Stalled Homebuyers