Has the thought of wanting to live in a tiny home been nagging at you more and more lately? While this type of dwelling has for years been touted as one potential solution for cities with sky-high property values, the under-500-square-feet lifestyle has been gaining popularity among people from all walks of life even before the pandemic.

In 2015, Jewel Pearson had made the choice to downsize her life and build her own 360-square-foot home in Charlotte, North Carolina. At the time, the term “tiny home” was not as common and did not bring to mind a very specific lifestyle. Pearson had wanted to be more mobile and, now that her daughter was grown, built a house that was perfectly tailored to her needs and interests: a wooden exterior on wheels, a walk-in closet and even an open space for entertaining — the last point was a priority and something she was able to achieve by choosing to minimize kitchen space.

“I was older than most of the people that were building tiny houses when I built mine,” Pearson told Inman. “Living in a lot of spaces and just knowing the things that make home for me helped make sure that, six or so years later, I still adore my tiny house.”

Pearson’s journey has been featured on HGTV shows like “Tiny House, Big Living” and “How Are They Now” and she has also co-founded Tiny House Trailblazers to help those who are impacted by racism and poverty access tiny homes. Since Pearson started her journey, the movement has also grown significantly and pushed many to explore tiny home living for all kinds of different reasons — with affordability (an average tiny home costs $59,884 compared to $269,039 for an average single-family property in the US) being one of the biggest.

But as with most things, there is more to tiny homes than the image that can appear on Instagram. We talked to a number of tiny home owners and experts about the legal, financial and social aspects of owning a home that’s under 500 square feet:

“Tiny home” is a widespread term for any property that is less than 500 (or, depending on who you ask, 600) square feet. But within that, there is a whole world of variations — from the usual single-owner home that is simply small in size to a home on wheels or an accessory dwelling unit (a smaller property adjoining a main one on the same lot). The latter is a popular option for someone who is looking to make supplemental income renting or have a nearby-but-separate living arrangement with a child or parent.

While a home on wheels has the major benefit of mobility, a stationary property is more likely to grow in equity, Tiny Home Industry Association board member Lindsay Wood told Inman. After a builder went bankrupt and bailed on them in 2017, Wood and her husband finished constructing 33-foot house-on-wheels themselves for a price that they capped at $90,000. They have been living in it since then and, prior to the pandemic, attended numerous tiny home festivals to meet other owners and gain knowledge about the different types of tiny homes out there.

“When we say the word tiny home, it’s more of a marketing term than a legal term,” Wood told Inman. “Tiny Home On Foundation (THOF) is kind of a term of being thrown around compared to THOW (tiny home on wheels.”

By far the biggest challenge facing anyone looking to build or buy a tiny home are the legal constraints, which can vary greatly from state to state. The most problems typically arise with tiny-homes-on-wheels, which most places in the country still treat like RVs rather than permanent residences — having one parked as a permanent home is simply not possible in most major cities.

California, which had 15.5 percent of all tiny homes in the U.S. in 2020 based on data from iPropertyManagement.com, has been changing its laws quicker than most parts of the country due to a homeless crises spurred by sky-high property values and a lack of affordable housing — Fresno, San Jose and Sonoma counties have all passed laws giving tiny homes on wheels recognition as residences (even if, for Sonoma, it applies only to caregivers living on the same land plot as the person they care for.)

“It’s the places that don’t have a nice set of rules for one to follow that are the trickiest,” Sean Ticknor, the founder of the Big Skills Tiny Homes non-profit in San Rafael, told Inman. “But the trend is toward expansion. A different place is changing laws to allow more tiny homes every month.”

What are your goals?:

Tiny home owners diverge into two very different types: those who are drawn to the lifestyle and exploring it as one of several options and those who are left with no other choice due to having a dearth of affordable real estate in their area. Within the former, there is a myriad of choices that will ultimately affect what and how you should build. Are you looking to supplement income with a tiny property next to your home? Spend a year traveling? Downsize and cut down on costs? Retire and spend your golden years in it?

Any type of long-term property will generally require more planning and consideration. Pearson advises people in the tiny home movement to make an in-depth list of what you want from the space, dividing specific features into must-haves and nice-to-haves. Once you have a clearer picture of what you’re after, start planning from there.

“Pay attention to how you use your current space and understand where you spend too much time or not enough time,” Pearson told Inman. “Noticing things like that helps you in designing and determining what you want from your tiny house.” 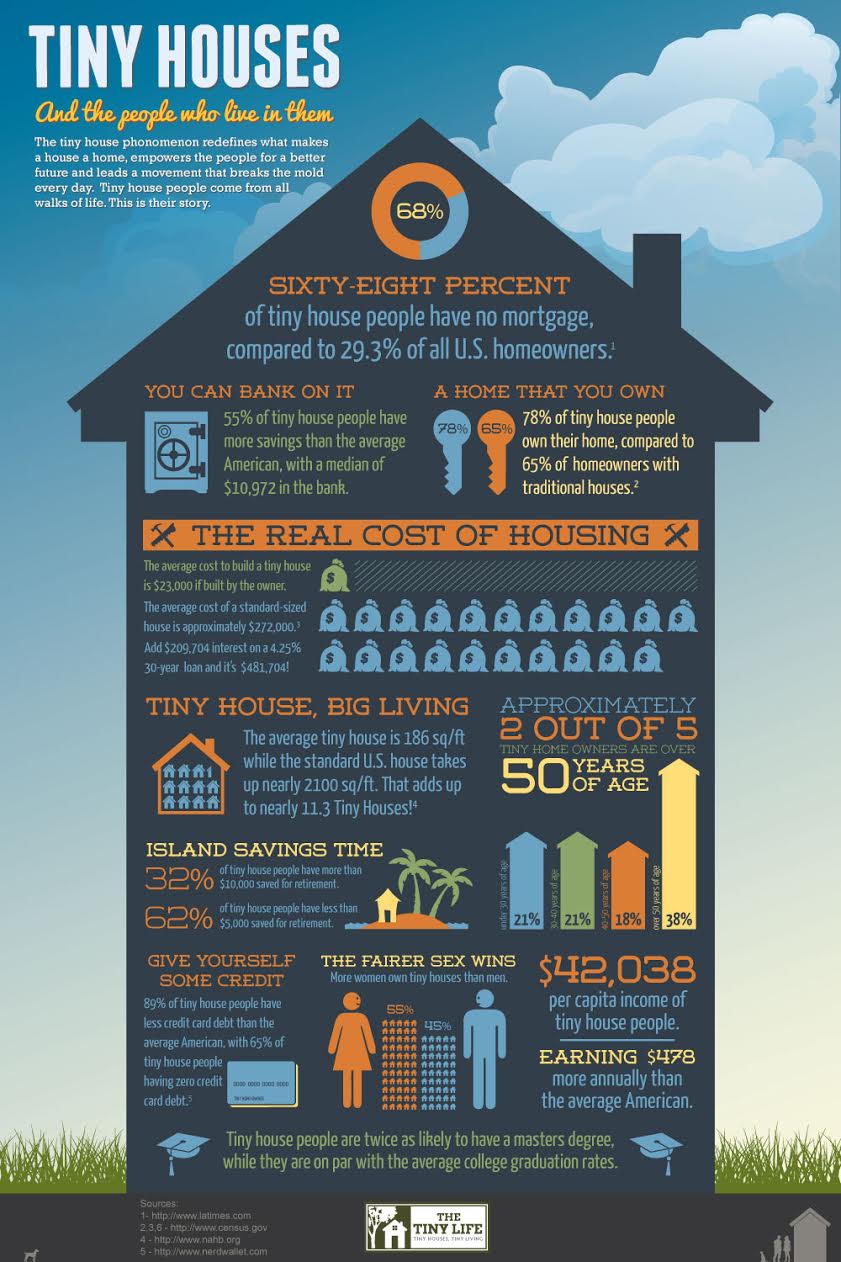 Now that you’ve decided to go small, the most important question is whether to buy a pre-made home, hire builders or get dirty and build one yourself. Retailers from Amazon to Ikea have been offering homes for as little as $7,000 and as much as $50,000 and more that can be assembled with a friend over a weekend. Building costs and materials can easily run over $100,000 but if your tiny home is going to be the place where you live for the long haul, taking that route will allow you to maximize the small space and make it as close to your individual needs as possible. For those who like constructing but fear math and architecture, Wood suggests pre-made models that can be easily assembled.

“While you’re probably not building a trailer yourself, you can choose from something that’s all done to something that’s 100 percent do-it-yourself,” she said. “There are many stages and most likely people’s ability and skill, as well as financial situation, are going to drive the reality of which way they go.”

Get ready for a lifestyle change:

Unless the tiny home is a guest house or a temporary solution, living in such a small space will require a serious downsizing and reevaluation of your lifestyle. Too many personal belongings will easily clutter the space and make you feel as though you are surrounded by junk.

“Compared to a 2,400-square-foot home, you have a small space that needs to fit the bathroom, kitchen, living room, bedroom and dining room,” Wood said. “There are a lot of unique designs out there but vertical space and multifunctional furniture are key. For example, I have a table that can seat six or seat two, drop down or be open in the room.”

Ticknor suggests anyone who is interested in the tiny home movement to rent a similar type of property on Airbnb for a week. Some will love it and will want to jump right into building while others may realize that such a small space is not as easy as smiling photos on social media can sometimes suggest.

“It’s pretty easy to find a tiny home on Airbnb,” Ticknor said. “Go live in one for a week and see how that goes.” 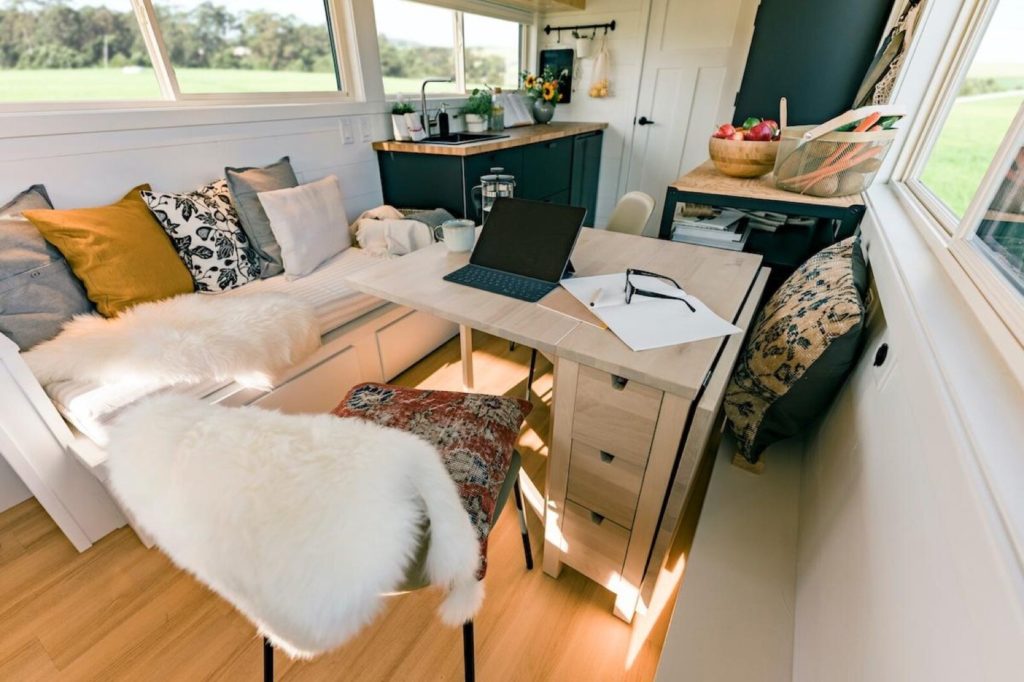 Once they test the waters for themselves, many tiny home owners get hooked on the lifestyle and start seeing how they can use it to help uplift others — Pearson chooses to educate people traditionally left out of homeownership due to racism on how a tiny home can be the first way toward building wealth as well as a mobile option when facing racist attacks. (She twice had to pack up her tiny house and leave quickly after being targeted by white supremacists at an RV park and another rural area.)

Ticknor’s foundation, Big Skills Tiny Homes, teaches students interested in trades and woodworking how to build a tiny home that then goes to an at-need youth in Oakland. Wood’s career plans include buying out the land on single-family properties and using it to build micro-villages and tiny home communities.

While the solutions to complex problems like poverty, housing affordability and racism run so much deeper than what often comes across as a trendy hipster movement can offer, tiny homes can provide opportunities to people who might have been shut away from ever owning real estate entirely. If you are drawn into the tiny home movement and the flexibility it offers, consider using it to help some of the people who need it most.

“Tiny homes allow you to get home to homeownership a lot quicker than the traditional homebuying process because you build or buy your house outright and, even if you do have a loan, you don’t have to get a 30-year mortgage,” Pearson said. “You have this opportunity for generational wealth building and that’s something that Black people and people of color in this country need immensely.”