With the exception of some notable cities, rent prices are growing even faster than they had been prior to the pandemic and point to a looming affordability crisis for tenants.

Rent for a single-family home in the United States grew by 3.1 percent in October. In the same month last year, that number was at 2.9 percent, according to the latest data from CoreLogic.

This is the first time since the coronavirus first hit the United States in the spring that rent price growth is higher than it was last year. With bustling job markets and high numbers of relocating professionals, cities like Phoenix and Tucson, Arizona, and Charlotte, North Carolina, have had such high rent growth that it slanted the mean in the rest of the country — 8.9 percent, 7.6 percent and 5.2 percent, respectively.

Rent growth can be a marker of how well a city’s housing market is doing overall. While high rent growth benefits homeowners and property managers looking for tenants, it can also create an affordability crisis. Cities like Honolulu and Boston did not share the type of growth seen in other places and saw rent prices fall by 0.4 and 4.1 percent.

The reasons for such discrepancies, according to CoreLogic, have to do with the city’s economies. Those that, like Honolulu, are heavily dependent on tourism saw high rates of pandemic-related unemployment (15.4 percent) and stagnant housing markets as a result. Boston, meanwhile, is heavily dependent on the students who move for its top-notch universities. When most higher education switched online and many students left, the city saw its rent prices plummet. 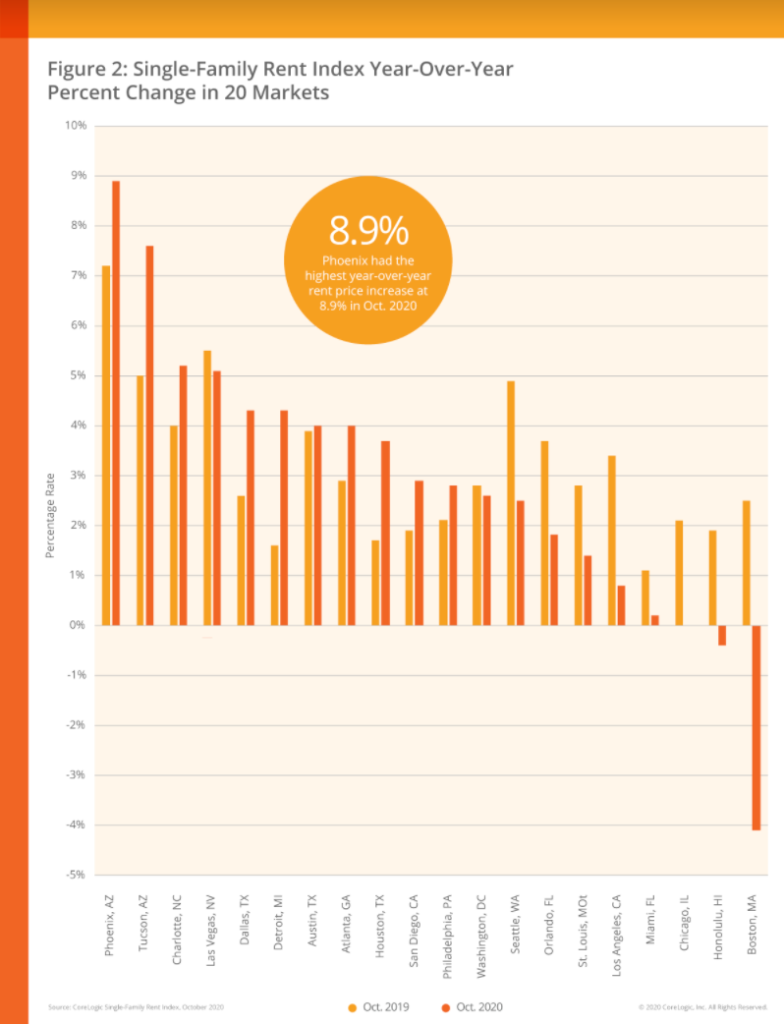 Overall, the numbers indicate that much of the pandemic’s impact on housing is still unknown. The average numbers offer some indication that the need for rentals remains strong but do not capture the situation in cities hardest-hit by the pandemic.

“Demand has grown for higher-tier single-family rentals as more people opt to rent larger spaces in less densely populated areas,” Molly Boesel, principal economist at CoreLogic, said in a statement. “Rent growth of lower-tier rentals still lags behind pre-pandemic rates, which is to be expected in an economy particularly challenging for low-wage earners.”

The 8 Biggest Stories That Impacted Real Estate Investors In 2020

By admin
11 mins ago