CEO Glenn Kelman said Wednesday that the company is “just about hitting on all cylinders” after hiring more agents and lenders in the second half of 2020.

Online brokerage and portal Redfin revealed Wednesday that it brought in $268 million in revenue during the first three months of 2021, notching another quarter in which the company handily beat expectations.

Redfin’s revenues between January and March represent a 40 percent increase compared to the same period in 2020. Heading into Wednesday’s earnings, analysts had expected the company to report $253.68 million in revenue, which would have represented a year-over-year increase of 32.8 percent.

In the report, CEO Glenn Kelman said that “after scrambling in the second half of 2020 to hire enough agents and lenders to handle a pandemic-driven surge in demand, Redfin is just about hitting on all cylinders.”

“A bull housing market has boosted our growth,” Kelman added during a call Wednesday afternoon with investors.

Kelman said during the investor call that the company increased its market share thanks to its aggressive approach to hiring. However, he also expects “headwinds” in the coming months when it comes to further growing Redfin’s market share. He attributed those headwinds to a lack of inventory in the housing market.

Other high points from Wednesday’s report include the expansion of iBuying program Redfin Now to five new markets. IBuying in particular has paid off for Redfin recently, according to Kelman, which he attributed to both rising home prices and to better execution of deals by Redfin itself.

Kelman added during the call that “our iBuying business has grown since the start of the year on almost every front.”

Redfin stock began Wednesday trading at just over $66 per share, but fell to just under $62 in the hours leading up to the company’s earnings report. That’s down for the week and month, and from the high of mid February, when shares were trading at more than $96. 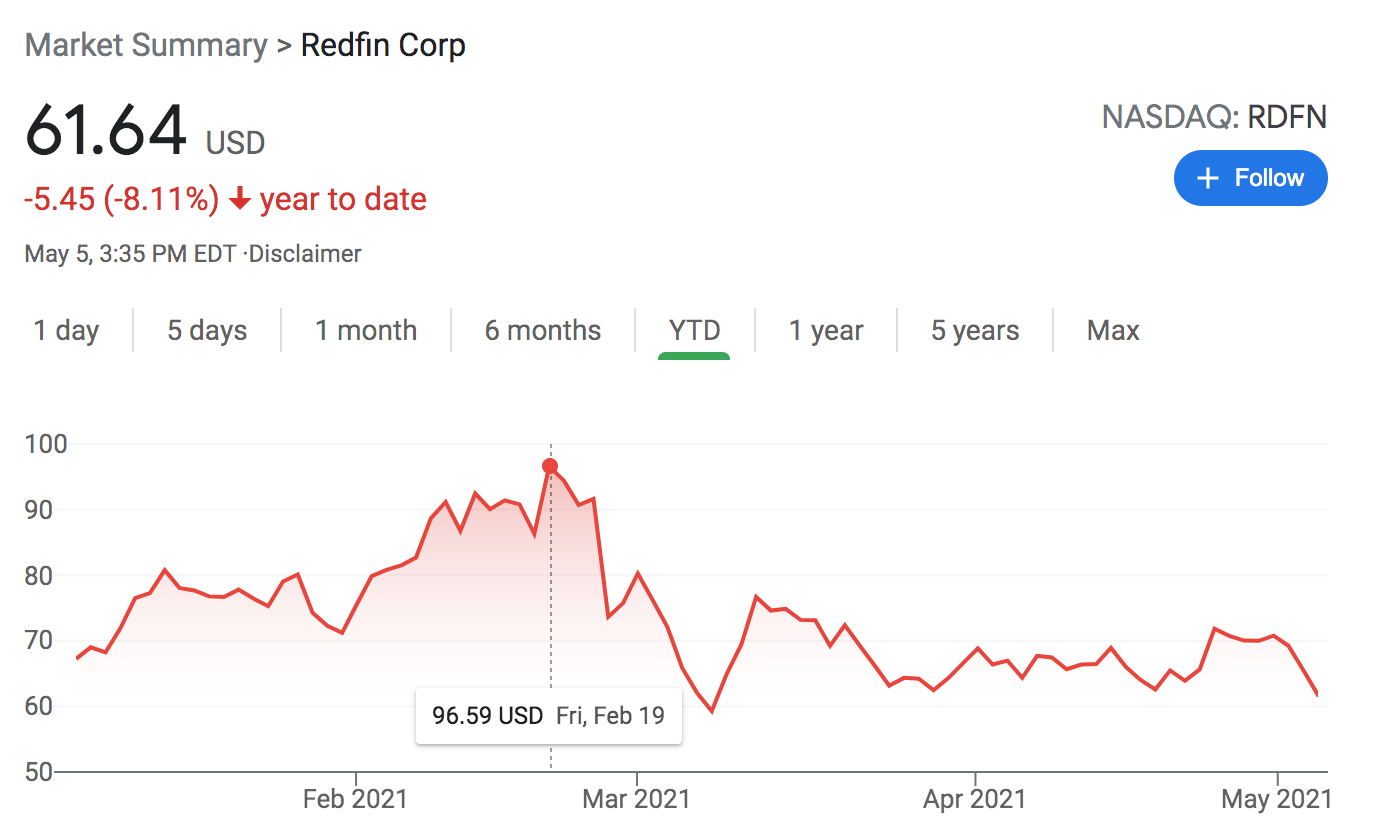 Following the release of Wednesday’s earnings report, Redfin stock fluctuated and ultimately ended up at around $60 per share in after hours trading.

The company’s market cap as of the end of the business day Wednesday was about $6.4 billion.

However, there are challenges. During his call with investors, Kelman said that despite hiring new agents “hand over fist,” the company has seen a 53 percent attrition rate for new agents. Kelman said new agents in particular have “struggled to get their footing” in the industry thanks to extremely low inventory, which means it’s harder for those agents to do their first deals and earn their first bonuses.

To address attrition, Redfin has begun offering new bonuses and training to agents. And over time, Redfin expects, “new hire attrition to go down,” Kelman said.

“We can do better,” he added. “And so that’s going to be our focus. We want to outpace the industry in retaining new talent.”

Kelman also revealed during Wednesday’s call that Redfin’s acquisition of rental firm RentPath — which owns the consumer-facing rental portals Rent.com and ApartmentGuide.com — wrapped up on April 2. Kelman said RentPath’s revenues declined during the quarter, and those declines are expected to continue into the second quarter of this year. Wednesday’s earnings report indicates RentPath should contribute between $10 million and $9 million to Redfin’s losses during the second quarter of 2021.

However, Kelman also said Redfin expected to have to invest in RentPath. And the longterm goal, he added, is to “digitize the process of renting a home.”

Redfin has been a perennial earnings season victor in recent quarters. Most recently, in February, the company revealed that it was able to ride the hot housing market to achieve better-than-expected revenues in the final three months of 2020. It was the fourth straight quarter in which the company managed to surpass expectations.

Update: This story was updated after publication with additional information from Redfin’s earnings report, and from a phone call the company held Wednesday afternoon with investors.

NAR’s Lobbying Playbook: ‘Make Friends Before You Need Them’