RE/MAX announced Thursday that it saw a modest increase in revenues during the first quarter of 2021 and that it also added more than 8,000 agents between January and March — more than during any quarter in the past decade.

RE/MAX announced Thursday that it saw a modest increase in revenues during the first quarter of 2021 and that it also added more than 8,000 agents between January and March — more than during any quarter in the past decade.

The new numbers, published in the company’s quarterly earnings report, note that RE/MAX brought in $72.3 million between January and March. That represents an increase of 2.9 percent year over year. The company’s net profit was $1.1 million — slightly lower than the $1.3 million from last quarter, and down from $2.6 million a year ago.

While those numbers are more modest than what some other real estate giants, such as eXp Realty, reported this week, they do represent a continuing turn around from mid 2020 when RE/MAX’s performance was hampered by the coronavirus and related lockdowns.

RE/MAX also celebrated a growing agent count in Thursday’s report, saying that its ranks grew 6.4 percent to 140,214 agents. Outside the U.S. and Canada, the company’s agent count grew 0.7 percent to 84,771.

“During this period, we also saw our largest year-over-year increase in agent count in over a decade, adding more than 8,000 new agents, led by healthy agent growth in Canada and double-digit agent growth globally,” Contos said, adding that “we are encouraged that many of the strong tailwinds we saw in the first quarter continued in April.”

Motto Mortgage — which launched in 2016 — earned a number of call outs in Thursday’s report. Among other things, the brand increased its number of opened franchises to 159, a jump of 27.1 percent year-over-year.

“The exponential growth we’ve seen with the Motto Mortgage brand and the diversification of franchise ownership across a multitude of leading real estate brokerage brands is exciting,” Ward Morrison, president of Motto Franchising, said in the report.

RE/MAX stock had been trading at around $37 per share for most of Thursday. That price mostly held steady in the minutes after the company published its earnings. As of Thursday afternoon, RE/MAX’s market cap was just over $700 million. 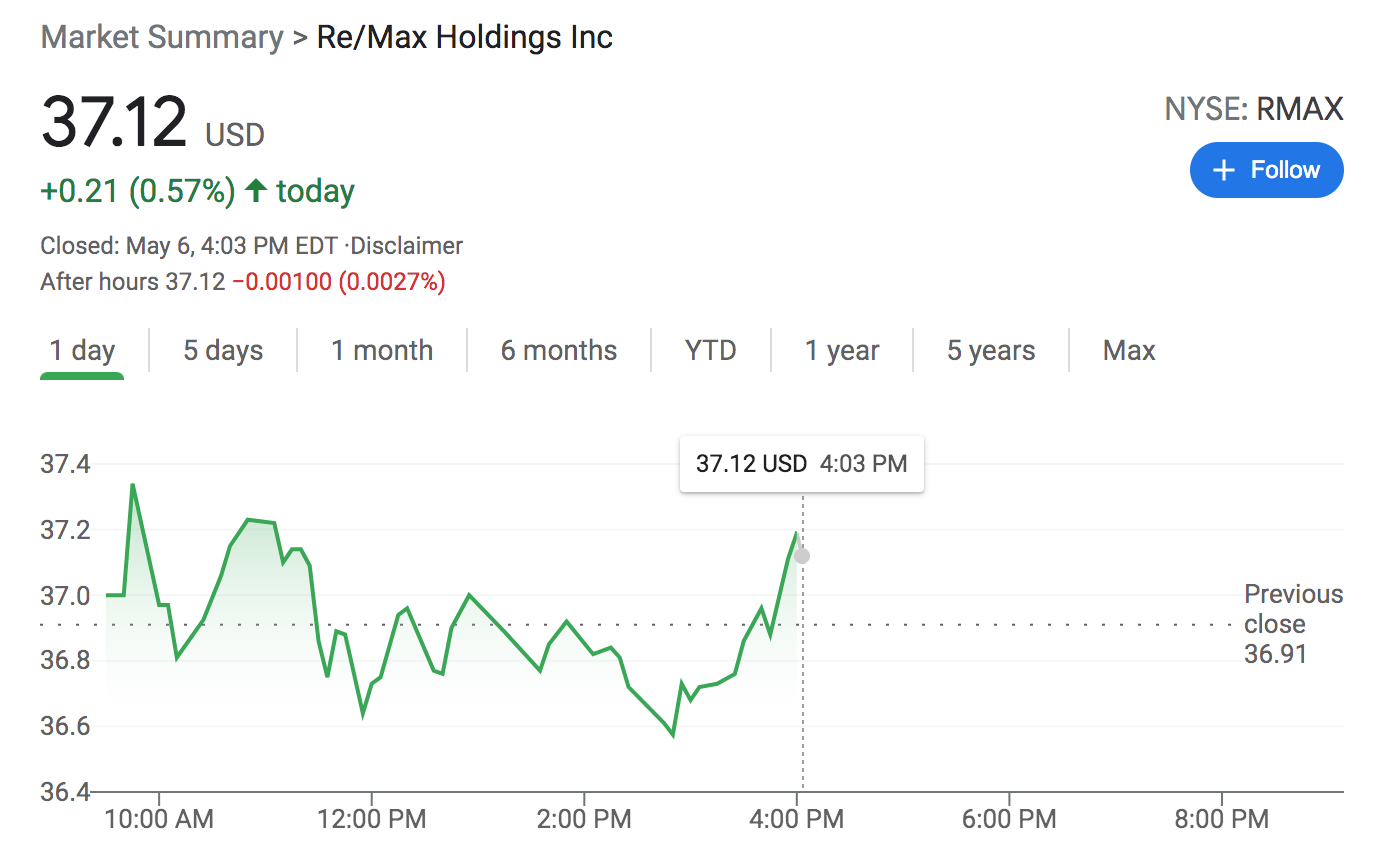 In its last earnings report, from February, RE/MAX reported that it earned $72.4 million in revenue during the fourth quarter of 2020. That was up 6.2 percent compared to one year earlier. The company attributed the growth to increased broker fees, which resulted from rising home prices and more sales.

In Thursday’s earnings report, RE/MAX broke down some of the factors dominating the market right now. One of those factors, according to the report, is that “homes are selling at a feverish pitch, further crimping the historically low inventory situation.”

“On average, homes that sold in March had been on the market just 38 days – nearly three weeks less than the March average of 59 days from the past four years,” RE/MAX also said.

As a result, homes are selling quickly and there is a “constantly thinner range of options for buyers to consider,” though “the good news is the incredible level of demand and the large number of transactions occurring.”

Update: This post was updated after publication with additional information from RE/MAX’s earnings report.