Pending-home sales also declined on an annual basis for the first time in eight consecutive months, according to the National Association of Realtors.

Pending-home sales declined 10.6 percent in February from the previous month to a Pending Home Sales Index (PHSI) of 110.3, according to data released by the National Association of Realtors (NAR) on Wednesday. An index of 100 represents the level of contract activity present in 2001.

The PHSI also declined on a year-over-year basis by 0.5 percent, the first time in 8 straight months that the index has dropped on an annual basis.

“The demand for a home purchase is widespread, multiple offers are prevalent, and days-on-market are swift but contracts are not clicking due to record-low inventory,” NAR Chief Economist Lawrence Yun said in a statement.

“Only the upper-end market is experiencing more activity because of reasonable supply. Demand, interestingly, does not yet appear to be impacted by recent modest rises in mortgage rates.”

Since the beginning of 2021, mortgage rates have steadily increased, but Yun noted that rates will likely not climb any higher than 3.5 percent for the remainder of 2021, which should keep buyers active in the market. The Fed also recently pledged to keep rates low until 2023.

Over the past several months, homes that cost $250,000 or more have largely been driving market demand, but Yun pointed out that homes in a slightly higher price tier — between $500,000 to $1 million — are also experiencing significant demand, causing widespread low inventory across multiple price points.

“Potential buyers may have to enlarge their geographic search areas, given the current tight market,” Yun said. “If there were a larger pool of inventory to select from — ideally a five- or a six-month supply — then more buyers would be able to purchase properties at an affordable price.”

Each of the four major U.S. regions saw declines in pending-home sales from the previous month, but year-over-year numbers were more mixed. 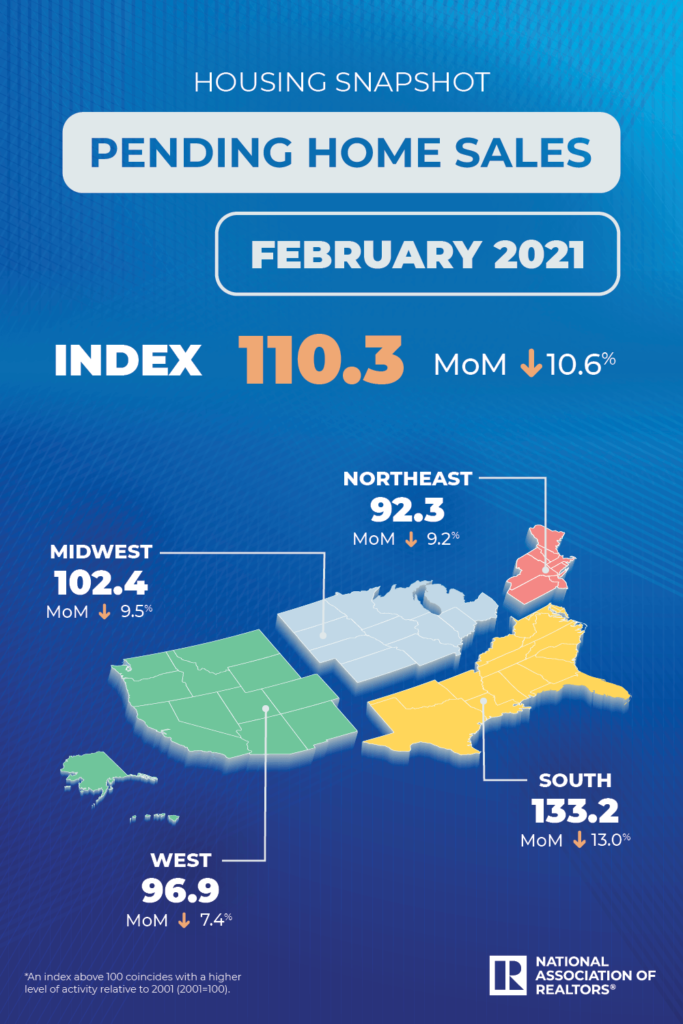 The South saw the greatest decline in pending-home sales from the month before, with the PHSI dropping 13 percent to an index of 133.2. However, that PHSI was still up 2.9 percent from the year before.

In the Northeast, the PHSI dropped 9.2 percent to 92.3, also down 3.9 percent from the previous year.

The West PHSI suffered the least during February, but still fell 7.4 percent from January to 96.9, which was up 1.9 percent from February 2020.

How One City Is Leading The Charge To Repair The Past