Before retiring at the end of 2018, the National Association of Realtors’ former chief lobbyist Jerry Giovaniello summed up the trade group’s lobbying motto: “Make your friends before you need them.”

That strategy — and the give and take with members of Congress it implies — continues to guide NAR’s political advocacy efforts and has repeatedly paid off, especially during the pandemic, according to panelists at the Realtors Legislative Meetings on Wednesday at a session called, “NAR Lobbying Strategy: An Overview for International Members.”

“The importance of lobbying is laying the groundwork and having that background knowledge, and trust, so that when the time comes for you to ask them to do something or fight on your behalf, there’s already that built-in trust and relationship,” Joe Harris, NAR’s vice president of government advocacy, told attendees.

Lobbyists at other organizations found themselves “flat-footed” when Congress was debating its massive pandemic relief bills because they hadn’t spent years gaining the trust of lawmakers beforehand like NAR had, according to Harris.

“If you’re scrambling during the pandemic to try to form those relationships on Zoom, good luck with that,” Harris said.

The bills ultimately included provisions NAR fought for, including funding for the Paycheck Protection Program to cover independent contractors and rental assistance for tenants and landlords.

Official meetings are “probably the most common thing that we do,” Harris said. “That can be in the office. It could be at a coffee shop. It could be in the hallway in between running to hearings. But these meetings are official in nature; there’s usually an ask. And we’ve been doing obviously a lot more of these on Zoom, which has afforded us the opportunity to do them a lot more often.”

NAR lobbyists also attend fundraisers and political activities in order to establish and keep relationships, according to Harris.

“You can’t, in this day and age, do that without supporting members of Congress and senators that are fighting for your issues,” he said. “You want to make sure that they have the resources they need to fight back primary challengers and you want them to know that you have their back.”

Harris said his favorite method of lobbying is social gatherings.

“If you don’t like being around people and meeting new people, you’re probably not going to do very well at this job,” he said. “The first thing that’s very important is to actually be respected and liked by the people you’re trying to lobby because if they don’t like you, you can have the best talking points, you could make the most salient arguments, you could have the best policies, but somehow it just doesn’t get through.”

“We want to make sure that the bills that are passed in Congress are interpreted by the executive branch the way that Congress intended them to be interpreted and that is where the rule-making process comes in,” Harris said. “They often have what are known as comment periods for for stakeholders to weigh in on draft rules or proposed rules before they’re finalized. That’s an extremely important part of what we do.”

Congressional staffers handle dozens of issues per day, so a key to successful lobbying is to hone in on why they should care about a particular issue.

“You make them care about it by showing how important it is to their constituents, first of all, and that usually has something to do with jobs or the economy or the price of homes or homelessness,” Harris said.

“It’s all about framing it in a way that makes them care about it because if the staff don’t really see the nexus of why their boss should really pay attention to an issue, they’re probably not going to pay attention to that issue.”

Lobbyists should do their homework before meeting with a lawmaker by looking at their voting record, their media appearances and their speeches, according to Harris.

“You should go in knowing, ‘Hey, Congressman, by the way, great job on CNN last night talking about flood insurance,’ or ‘Really enjoyed reading your op-ed the other day on the housing inventory prices,’” Harris said. “Make that part of your advocacy and let them know that you’re paying attention to what they’re doing.” 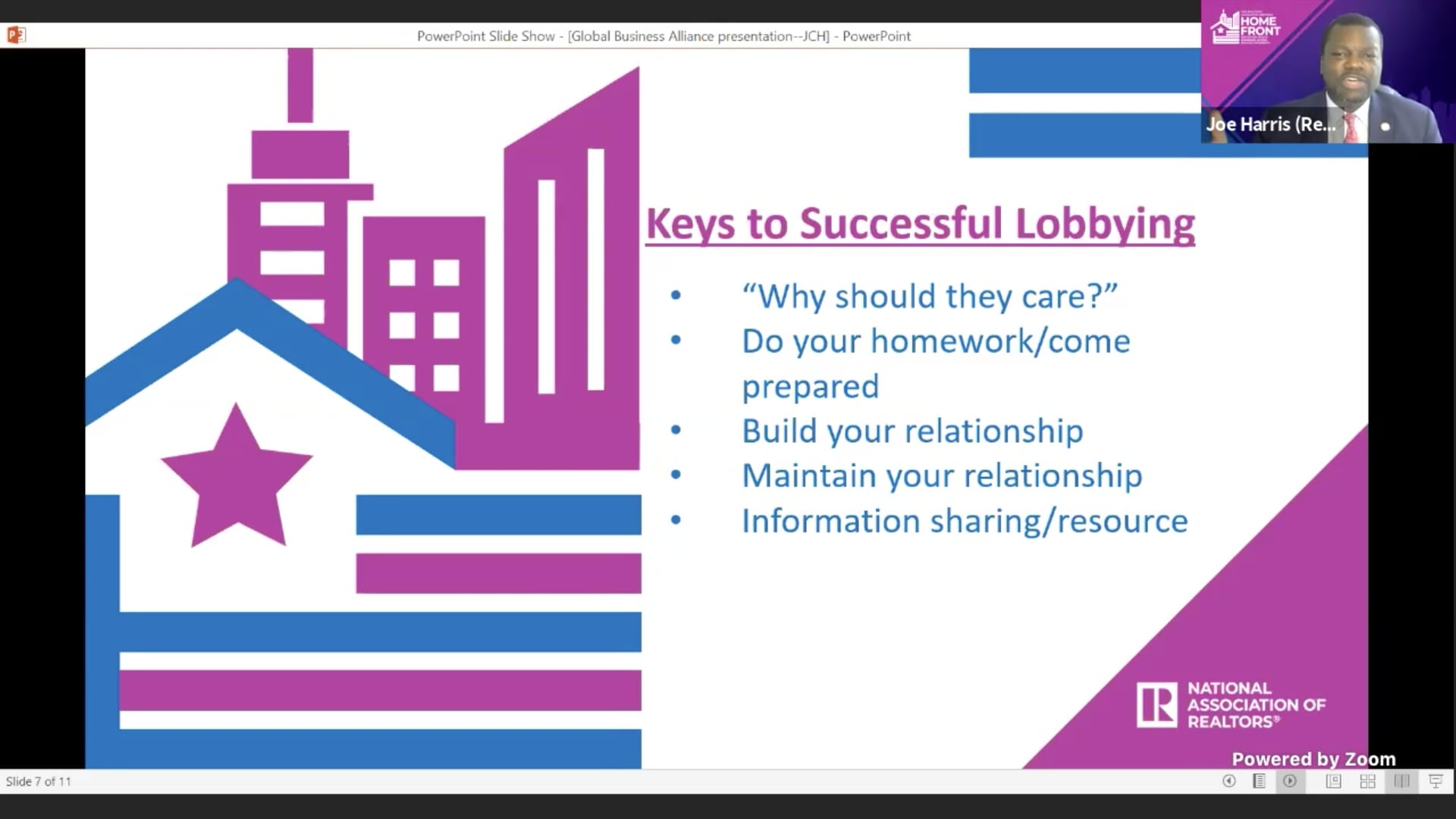 “It’s a matter of building trust,” he said. “You have to put in your time and you have to be genuine about it. It’s about not needing the relationship just so you have somebody to go to when you have a problem or need information. It can’t be a one way street. Maintaining those relationships really has a lot to do with showing you care, showing that it’s about more than just business.

“You’d be surprised how many people don’t take that extra step of checking in, dropping by the office [and] saying, ‘Hey, you want to grab coffee? How’s your mom doing? I know that she was sick.’”

Exchanging information is also an important component to maintaining relationship, according to Harris.

“Members of Congress cannot make decisions in a vacuum,” he said. “It’s good for them to know how the policies that are being discussed are going to affect our business and it’s good for them to know what the conditions are on the ground in their districts. And in turn, we’ll get information from them: ‘By the way, there’s going to be a markup in two weeks that hasn’t been noticed, but you guys might want to prepare some information about about issue X or issue Y.’”

Of course, a major key to NAR’s success is its political action committee, RPAC, which Harris said is “well-respected” by lawmakers. Because RPAC touts itself as bipartisan and puts its “money where our mouth is” by giving fairly equally to members of Congress on both sides of the aisle, that separates NAR from other trade organizations, according to Harris. 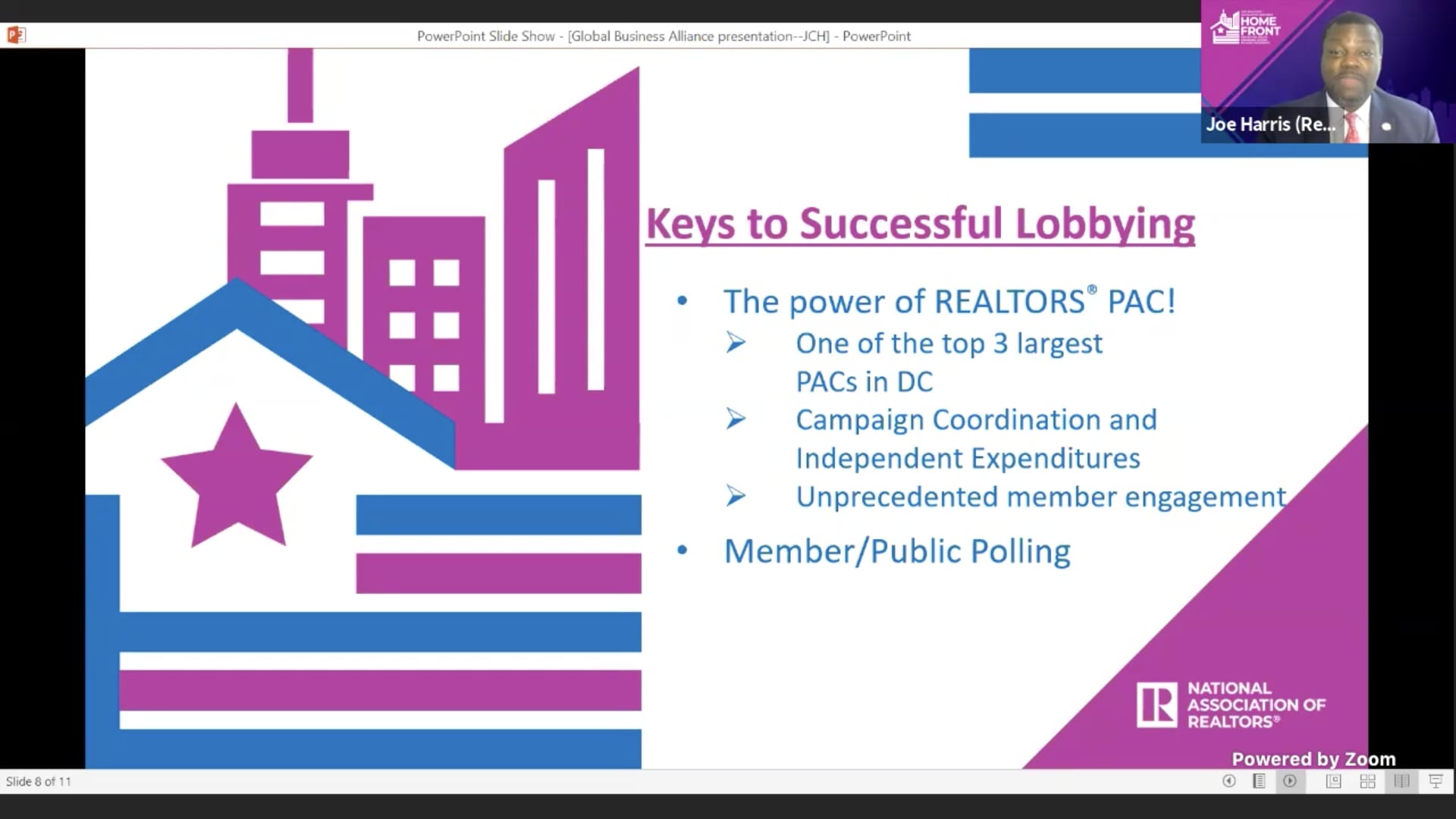 “Everything is very partisan,” he said. “That’s where we shine. That’s where we provide a lot of value-add because we help out organizations, groups like the bipartisan Problem Solvers Caucus, a group of 30 Democrats and 30 Republicans who try to find common ground. They understand they’re not going to agree on 25 percent of the stuff, so let’s focus on the 75 [percent] that we can agree on.

“We bridge that gap by sticking to the economy, by sticking to affordability, homeownership affordability, fair housing — issues that can bring the parties together. Our agenda is not to try to advantage one party or the other. It’s to get them to talk. It’s to get them to work together and it’s also to give them the tools, the information, the statistics, the research, the policy drafts that can become legislation. It gives them that lifeline. And that’s why you see us putting a lot of bipartisan legislation on our talking points this year.”

NAR has a Federal Political Coordinator program in which each member of Congress is assigned a volunteer in their district or state to educate the lawmaker on issues important to the real estate industry.

“[FPCs are] our first line of defense and oftentimes our first line of offense, as I like to say, with members of Congress because they are not only able to respond when things come up, but they’re also able to be proactive and warn us of things that are coming that could be a problem down the road before they become a problem,” Harris said.

“This is the secret sauce of our advocacy because a lot of folks have big-time lobbyists or lot of money in their PAC. Very few organizations have a person assigned to every single member of Congress who has their eyes and ears on the ground, somebody they can trust, somebody they can rely on to give them information that’s going to be useful to them, and what’s going on back in the district.”

Fellow panelist David Wluka, the federal political coordinator for U.S. Senator Elizabeth Warren, noted that Warren’s team has leaned on him as a resource for issues such as student loan forgiveness.

“We have access to information they don’t,” Wluka said. “We’ve been feeding them back and forth and it creates an interdependency that’s very powerful.”

Of course, that information must be factually accurate, according to Wluka

“Our most important asset is our credibility,” he said. “If they take action on it, sponsoring a bill or opposing one based on information from us, they’re exposing their own credibility. If we harm that, our credibility is gone.”

Unlike most trade groups, NAR is not seen as self-serving and that’s important, according to Wluka.

“It’s the result of the fact that we’re both [a] grassroots, bottoms-up organization and that many of the policies and legislation and programs that we support and pursue have no direct connection to our bottom line,” he said.

“I’ve testified before Congress and work on legislation for affordable housing, housing opportunities, environmental protection — none of which will help sell a house. But we stand for the ownership of land, private property rights, the broader issues, and when we go into Congress as FPCs, as constituents, they understand that.”

While many Realtors feel that government is akin to a faraway, untouchable castle, lawmakers are just like anyone else, according to Wluka.

“Government is accessible, but you have to reach out,” he said. “They’re people like us. They happen to run for office, but they have other lives, and they’re real. They’re not gods and they’re not sitting in ivory towers. If they think they are, it’s our job to break through.”

May Is All About Second Homes And Investment Properties At Inman