Violating the National Association of Realtors’ new policy against hate speech is considered a serious offense and will be punished accordingly, according to the fourth of six monthly training webinars the 1.4 million-member trade group is hosting in the wake of the ethics changes.

In November, the board of directors of NAR passed controversial changes to its professional standards to crack down on racist and discriminatory speech and behavior.

The changes, which became effective immediately on Nov. 13 and are not retroactive, apply NAR’s Code of Ethics and Standards of Practice to all of a Realtor’s activities, not just those related to real estate; prohibit hate and harassing speech against protected classes; prohibit all discrimination, not just willful discrimination, against protected classes; and recommend that ethics violations be considered under membership qualification criteria.

One of the policies that was approved, Standard of Practice 10-5, reads as follows: “Realtors must not use harassing speech, hate speech, epithets, or slurs based on race, color, religion, sex, handicap, familial status, national origin, sexual orientation, or gender identity.”

A Realtor that violates the policy would be charged under Article 10 of the Code of Ethics, which prohibits denying equal professional services to anyone in those protected classes. Under revised sanctioning guidelines, discrimination against the protected classes under the code “should be considered particularly egregious” because it’s a violation of the public trust.

“Discrimination is a big deal,” Leigh York, 2020 chair of the NAR Professional Standards Committee’s Interpretation and Procedures Advisory Board, told more than 900 webinar attendees. “That is not a slap on the hand.”

The webinar focused on changes to the guidelines under the trade group’s 250-page Code of Ethics and Arbitration Manual. The manual contains policies and procedures that professional standards committees for local and state Realtor associations use to evaluate ethics complaints. NAR requires several elements be in place to ensure due process, including the opportunity to cross-examine witnesses, the right to counsel and the ability to appeal.

In order for a hearing panel to find a violation has occurred, the complainant must provide “clear, strong, and convincing evidence.” For violations of the new hate speech policy, 10-5, at minimum a Realtor would have had to have used harassing speech, hate speech, epithets or slurs as defined in the manual and that speech would have had to be based on a protected class.

If a violation of the Realtor Code of Ethics is found, discipline could range from no discipline to expulsion from membership for up to three years. 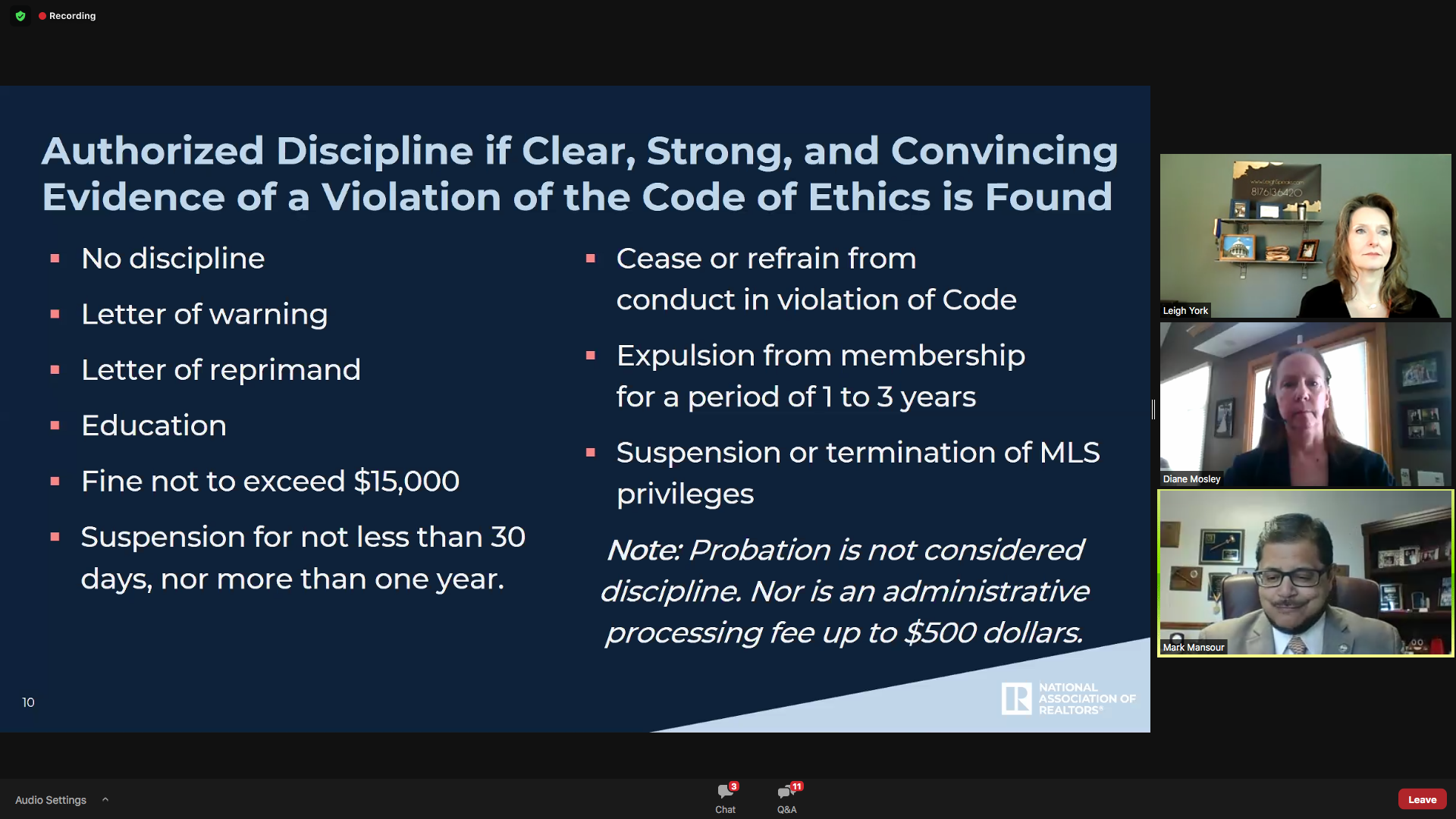 As part of the recent policy changes, the sanctioning guidelines have been revised to state: “Hearing panels privy to all facts and circumstances take into consideration the entire course of events, weighing a respondent’s experience, prior violations, and mitigating or extenuating circumstances.”

That means, as Professional Standards Committee members have taken pains to emphasize in the last few months, that context matters. Whether someone meant to violate the code intentionally, whether the violation was a minor mistake or whether the member actually harmed someone, whether they’ve committed the same or similar violations before, and whether they acknowledge the wrong they’ve done or taken steps to address it will impact the discipline they receive, according to York. 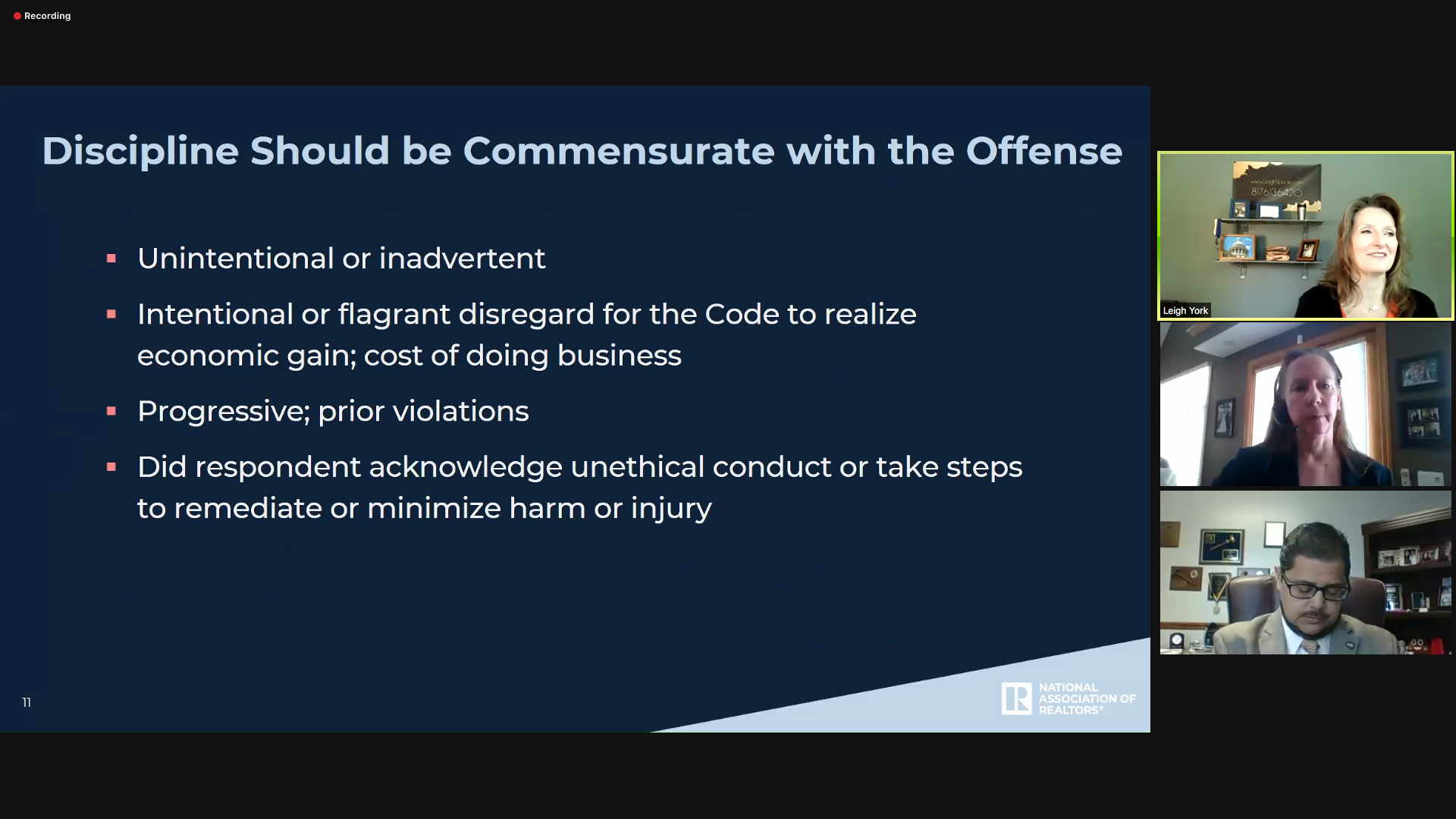 York gave a hypothetical example of discipline under the new guidelines: Say there’s a Realtor who posts several discriminatory comments on social media which are determined by a hearing panel to discriminate against individuals on the basis of their membership in a protected class. The panel issues a $5,000 fine and requires completion of implicit bias training. (NAR is currently working on developing implicit bias training, York said.)

“This is serious, right?” York said. “It affects the public, it harms the public. In my market a $5,000 fine is substantial and so I think that this makes sense. I think this is realistic.”

“But again, if they recognize the mistake, and it’s clear that they’ll do better in the future, it still is going to be a lower sanction than someone who is just obstinate that they shouldn’t have to play by those rules,” she added.

York said there’s no “hard and fast rule” for how far back into a member’s violation history hearing panels should go, but she cautioned against considering too long of a history of different violations to avoid being unreasonably harsh. Still, if the member has consistently committed similar violations or if the violations are of the public trust, then considering a longer history of violations “could be appropriate in crafting meaningful discipline aimed at curtailing the behavior,” NAR said.

With regard to a first violation of Article 10 or Standard of Practice 3-11, which prohibits Realtors from refusing to cooperate on the basis of a broker’s membership in a protected class, the guidelines say a Realtor can be fined up to $10,000 and have their membership suspended for up to 90 days or terminated for up to three years. This doesn’t mean that a $10,000 fine is required and doesn’t prevent a hearing panel from imposing a fine up to $15,000, according to NAR. 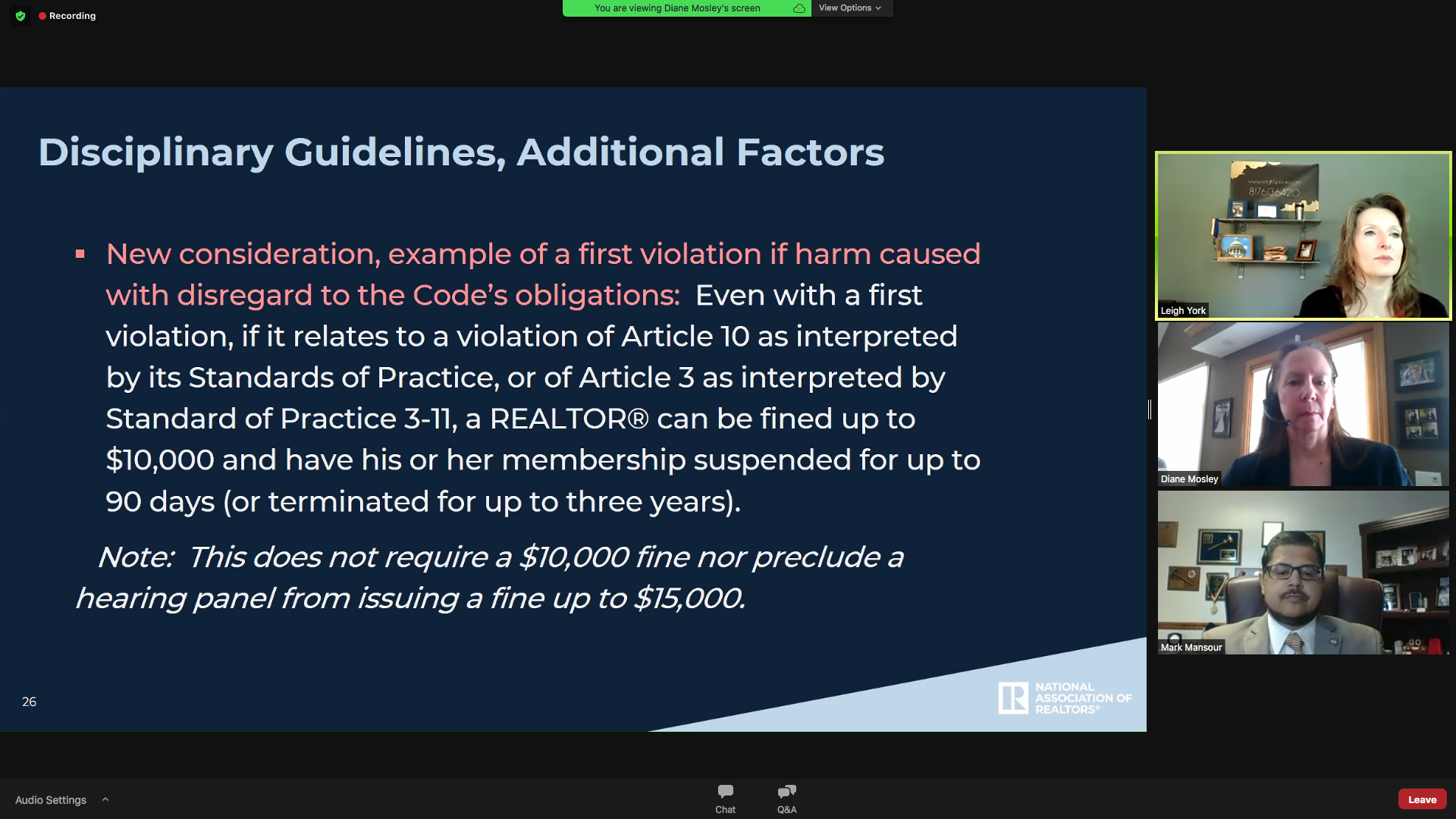 “Discipline should be consistent with the seriousness of the violation, their harm to consumers, and the reputation of Realtors,” York said. “Because of media and social media … if one Realtor does it, it makes us all look bad to a much greater extent than it did in the past. We have to consider that.” 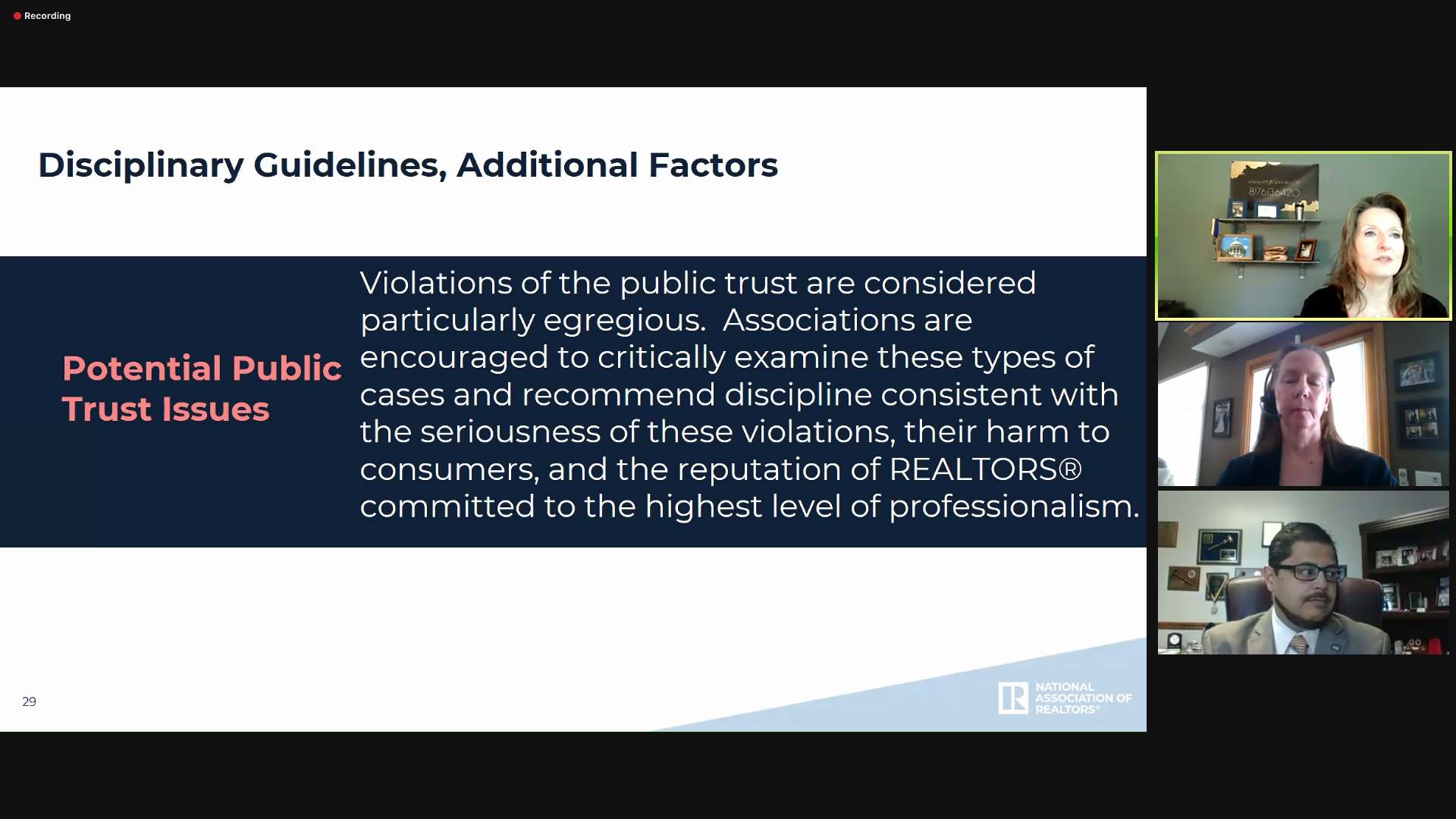 In the Q&A portion of the webinar, an attendee asked whether a Realtor who is also a comedian, actor or musician and utters disparaging comments could be considered a violator.

“If they’re playing a character in the film, theater or whatever and that’s part of the script, then that’s not necessarily saying something that they believe in,” York said “I think that the audience interprets that as the character is doing that. I think it’s when the Realtor steps out there and makes it look like it’s coming from them personally, which would lead anyone to believe that they would discriminate.”

She added that she’s has not heard of such a scenario actually happening.

Another attendee asked how to stop a hearing panel from making an example out of a Realtor. York pointed out that ethics hearing outcomes are confidential.

“We’re never using sanctions to set an example because it’s all confidential,” York said. “Nobody’s supposed to know anyway. I mean if that’s getting out there, then we have a whole other problem.”

There are three exceptions to confidentiality and association staff decides when a situation warrants an exception, according to York. First, if a member is found to be in violation, then the panel can see if the member has a history of violations. Second, if the panel determines the member violated the public trust in a real estate event, then that violation must be forwarded to the state licensing authority or regulatory board.

Lastly, the violation is entered into NAR’s NRDS member database so that if the member applies to another local Realtor association, that association’s staff (but not other members or the public) can see if the member has any outstanding sanctions.

Another attendee asked whether Realtors are required to file an ethics complaint if they know another Realtor has violated the code. The code’s preamble reads: “[Realtors] identify and take steps, through enforcement of this Code of Ethics and by assisting appropriate regulatory bodies, to eliminate practices which may damage the public or which might discredit or bring dishonor to the real estate profession. Realtors having direct personal knowledge of conduct that may violate the Code of Ethics involving misappropriation of client or customer funds or property, discrimination against the protected classes under the Code of Ethics, or fraud, bring such matters to the attention of the appropriate Board or Association of Realtors.”

But NAR staffer Diane Mosley noted that the preamble is not obligatory, but rather “aspirational.”

“There’s no ethical obligation for a Realtor to file if they have direct personal knowledge, but … there is that aspirational objective,” she said. “If the code isn’t used and enforced it becomes irrelevant.”

Lastly, an attendee asked if re-sharing a social media post or pressing the “Like” button without expressing their own opinion on the post could violate 10-5. Committee member and attorney Bruce Aydt gave his personal opinion, noting that NAR was in the process of coming up with case interpretations that would help hearing panels evaluate such complaints.

“When you talk about hate speech, harassing speech, epithets or slurs based upon the protected classes, if somebody else posts something like that and then you turn around and like it or share it that’s an indication that you are assenting to it, that you are confirming it, that you are in fact agreeing with it and essentially ratifying that statement,” he said.

“If I were sitting on a hearing panel there would be little doubt in my mind that that is essentially the same thing as using the harassing speech, hate speech, epithets or slurs on your own.”