Nationwide, 6.3 percent of mortgages were in some state of delinquency in September — up from 3.8 percent a year earlier, according to the property analytics provider.

While not spiking yet, mortgage delinquency rates across the country remain significantly higher than they were during the same period last year.

Nationwide, 6.3 percent of mortgages were in some state of delinquency in September, up from 3.8 percent a year earlier but down from 6.6 percent in August, according to the latest data from property analytics provider CoreLogic. Serious delinquencies (mortgage payments late by more than 90 days) experienced the biggest spike, rising to 4.2 percent from 1.3 percent last year.

Delinquencies of more than 30 days and between 60 and 89 days experienced less drastic spikes but remain high nationwide, according to the analysis. Foreclosures, meanwhile, fell to 0.3 percent from 0.4 percent due in part to government forbearance programs that have helped keep late-paying homeowners from losing their properties.

“High home equity balances and structural protections put in place as a result of the Great Recession contributed to surviving this test,” CoreLogic CEO Frank Martell said in a statement. “Housing demand remains strong, and rates low, which provides optimism that the housing market will continue to be a bright spot in this COVID-ravaged economy.”

While short of a crises, the numbers indicate homeowners continue to be impacted by pandemic-induced shutdowns and could struggle to make up lost payments in the months to come — especially when forbearance programs expire.

States that rely on tourism and entertainment saw the biggest rates of unemployment and, subsequently, the biggest increases in delinquency rates. Nevada, Hawaii and Florida saw increases of 4.9, 4.7 and 4 percentage points, respectively. 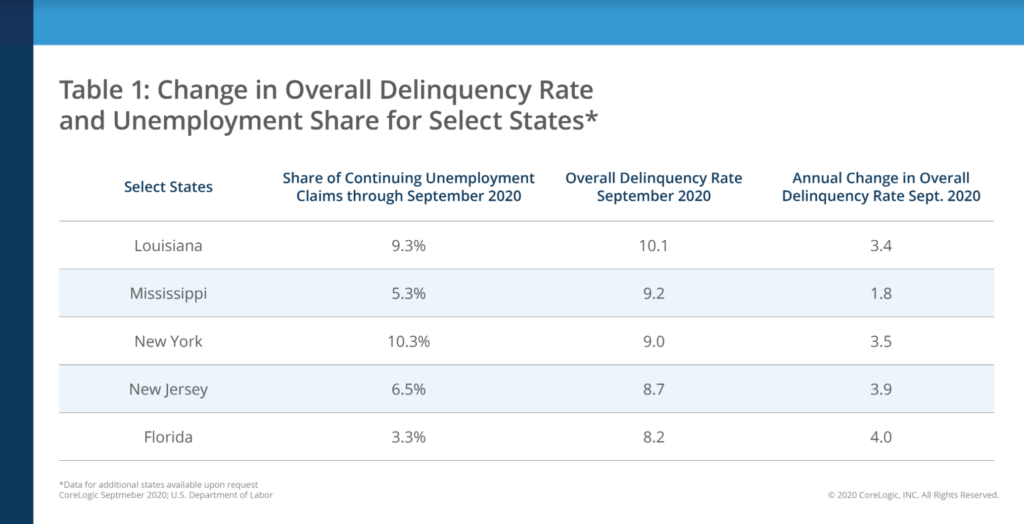 At the moment, a combination of home value growth, government programs and earlier bank restrictions on high-risk borrowers is keeping most people afloat even as the pandemic creates a crisis of unemployment. But as CoreLogic’s analysts predict, the after-effects of the closures that started in the spring could be felt for years, particularly if missed payments add up for more than a month.

“Our analysis of CoreLogic public records shows that more than one-half of all home mortgage loans created since the onset of the pandemic have been no-cash-out refinance,” Dr. Frank Nothaft, chief economist at CoreLogic, said in a statement. “By reducing their mortgage rate with these types of loans, homeowners have been lowering both their interest expense and risk of delinquency.”