The past year has been a catch-22 for millions of homebuyers who want to seize record-low mortgage rates but can’t meet tightened lending standards, such as 20-percent down payments, hefty cash reserves and 700 credit scores.

“[A] credit score is a vital component to homeownership, which means that those with lower scores begin experiencing the consequences of their earlier financial choices later in their lives,” the report read. “As a result, the homebuying process can be delayed for months, or even years, as a prospective homebuyer tries to improve their score to gain access to more favorable interest rates. In the interim, the price of property may rise, making affordability a continued challenge.”

From November 2020 to January 2021, OJO Labs surveyed more than 450 homebuyers and new homeowners about their homebuying journey. Homebuyers with fair credit scores reported higher levels of student loan, medical and credit card debt, and were more likely to have no family history of homeownership (40 percent vs. 22 percent for buyers with scores >740).

First-time homebuyers are also more likely to have a fair credit score rating, the report said.

Beyond a buyer’s financial health, OJO Labs found a correlation between race and gender and lower credit scores. “Credit score challenges are not distributed equally by race or gender. In our study, Black homebuyers were three times more likely to have a fair credit score than a great one,” the report said.

The road to homeownership is rough for buyers with lower scores, as they have less access to the very programs created to help them correct financial missteps and fund their purchase. Ninety-two percent of buyers with low credit scores said they received “no or little support” from an agent or lender during their homebuying journey, compared to buyers with good (68 percent) or great (72 percent) credit.

“Unfortunately, the tools and resources currently available are least visible and accessible to those who need them the most — people struggling with their credit and finances,” the report noted. “For example, only 33 percent of shoppers with fair credit were aware of homebuyer counselors, compared to almost 70 percent of those with good credit.” 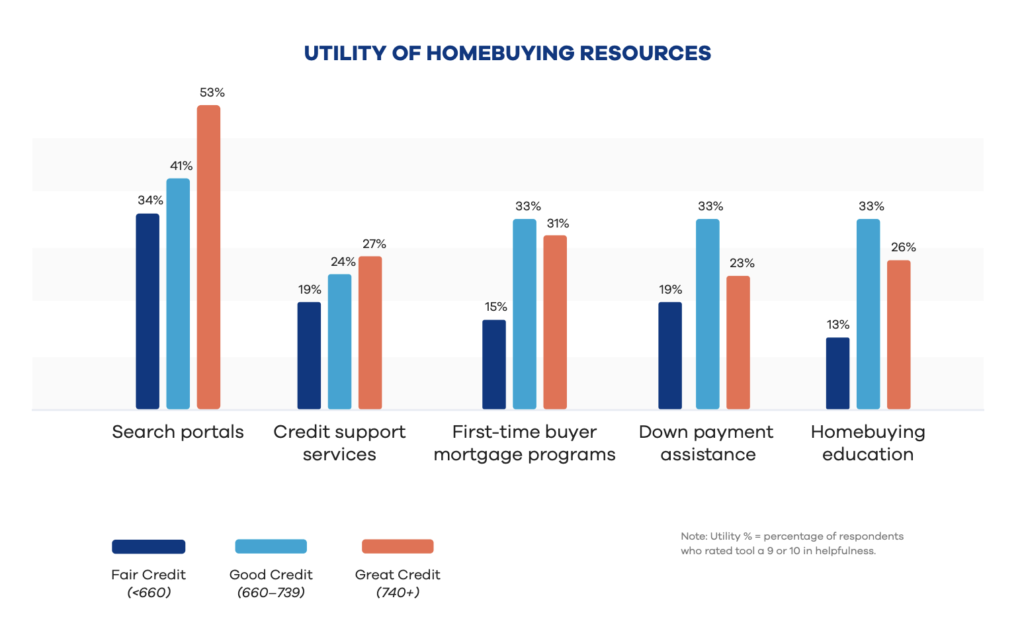 In fact, homebuyers with credit scores below 660 still had great difficulty with saving for a down payment (48 percent), getting approved for a mortgage (50 percent), and choosing the right mortgage (44 percent).

More than half of new homeowners with low credit scores said their journey was extremely difficult (52 percent) and were unsure that owning a home would lead to long-term wealth (66 percent vs 90 percent for buyers with great scores).

OJO Labs co-founder and CEO John Berkowitz said the report reveals the opportunity to increase access to homeownership education programs and address factors that make it harder for women and people of color to become homeowners.

“Access to financing remains one of the greatest barriers to homeownership today,” Berkowitz said. “Our research uncovers the need to educate consumers on the variables impacting their ability to buy a home, including credit scores, and to shed light on the resources that aren’t currently reaching the people who need them the most.”

“OJO has a unique opportunity to enable more people to achieve homeownership, and address inequities that have prevented others from accessing the security and wealth a home has to offer,” he added.