They share the same DNA. They had lived in the same city for decades. And their children both graduated from Las Vegas’ Coronado High School on the same day in 2018.

But Michele Dugan and Trish Morgan-Tilley didn’t meet each other until they were 48 years old — when each learned for the first time that she had a sister.

“👋,” Dugan wrote to Morgan-Tilley in their first exchange via Facebook Messenger.

And the sisters hit it off from there.

With a mom who was unable to care for herself, let alone others, Dugan was passed around to foster homes and orphanages from the time she was six months old until she was adopted at the age of seven. She is very close with and grateful for her adoptive family, she says — and her biological brother, Michael, was always housed with her too.

But as Dugan grew older and had her own family, she started to wonder where she came from. Little did she know then just how much creating an account with Ancestry.com in mid-life would open up her world and lead to a successful family real estate team: Sisters Selling Vegas.

After Dugan created an account with Ancestry.com, she was matched with her and Morgan-Tilley’s brother, Ken Foster, who was also on the online genealogical network (Morgan-Tilley didn’t have an account on the site). He informed Dugan that there were more siblings out there that she should meet — what the family now believes to be a total of seven full and half-siblings — including Morgan-Tilley, who lived in Las Vegas, like Dugan.

After Dugan decided to initiate that fateful Facebook Messenger exchange with Morgan-Tilley, the two met up for lunch, despite some of their family members’ skepticism.

“They were skeptics,” Morgan-Tilley said. “They were like — a sister?”

But after the two sisters got over their stomach butterflies at lunch, they couldn’t catch up enough. Morgan-Tilley said she knew immediately that they had to be related because of Dugan’s resemblance to their father.

“It was like looking at a ghost because she is exactly our dad’s twin,” Morgan-Tilley said. “The blue eyes, the hair, everything. So I couldn’t stop staring at her. Like, you’re definitely my sister, for sure, 1,000 percent.”

Putting the pieces together

The sisters were confused because they learned they were the same age — but not born on the same day, so they weren’t twins. How did this add up?

Morgan-Tilley thought about her childhood and started forming a hunch. She grew up with her mom, her dad and two brothers in California, and then the family moved to Las Vegas in 1978 when Morgan-Tilley was 7 years old. But Morgan-Tilley was actually born in Michigan — a funny fact she had never really questioned much.

After meeting Dugan, however, Morgan-Tilley confronted her mother about it and learned that the reason her pregnant mother had gone to Michigan was because she found out that her husband — Morgan-Tilley and Dugan’s father — was having an affair with the woman who would become Dugan’s mother, and she was seeking refuge with her parents who lived in Michigan. The girls’ father followed Morgan-Tilley’s mom to Michigan and eventually convinced her to come back home with him after Morgan-Tilley was born.

The sisters’ dad passed away in 2004. But Morgan-Tilley’s mother, Jackie, is still alive. When Dugan met her for the first time, she was incredibly nervous because, “I’m the result of her heartbreak,” she said. But she soon learned, there was nothing to worry about.

Dugan realized her love for real estate years ago. Seeking out a career that would provide her with flexibility to spend time with her children, she got her real estate license in 1998 and hasn’t looked back since.

Morgan-Tilley, on the other hand, only recently came to real estate. She led the rough and tumble life of a bartender for about 15 years before she had kids, but once she had little ones to look after, she realized she needed a change. She tried managing time shares, then worked as a call center manager for a stretch, but nothing really seemed to stick. 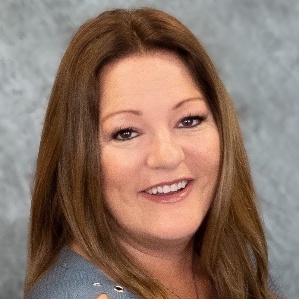 Years ago, Morgan-Tilley had considered real estate as a career, but at the time, she didn’t feel like she had the right resources or support to get her license. But shortly before she met Dugan, the time seemed right, and she got her license. She had just started interviewing with different brokers — and was getting pretty discouraged about not clicking with anyone — when Dugan came into her life, and she learned that Dugan was a Realtor.

“It was the universe talking,” Dugan said. “When we met, [Trish] was really at a point in her life where … she was almost a little like, ‘What do I do?’ Depressed.”

“And for me,” Dugan continued, “I was so busy. I remember saying to someone, ‘I need another me. I need someone who really likes to work and cater to clients and is not just in it for the paycheck, but in it for all the right reasons …’ And there she is! We just came into each other’s life at the absolute perfect time.”

The duo has a couple other members on their Realty One Group-affiliated team who aren’t currently active, so it’s essentially the two of them getting it all done. They both have their hands in a little bit of everything, so they tend to play tag-team a lot on their transactions.

“We 1,000 percent have our hands on everything, each of us,” Dugan said. “We each tag-team every transaction, every file, every client, every house. We go together for safety, we go together just because we bounce off each other, and our clients love our whole vibe.”

Morgan-Tilley credits Dugan with teaching her everything she knows, and Dugan couldn’t be more proud of her sister’s quick progress in the field.

“I’m throwing stuff at her and … she’s just really blossomed and it’s been really fun to watch,” Dugan said.

Now that they’ve found each other after all these years, Morgan-Tilley and Dugan are hard to tear apart. In addition running a real estate team together, the sisters work out together in the mornings, they go clothes shopping and grocery shopping, they cook together and feed their families together, and they travel together.

“We say this: We missed the first 48 years, so now we’re just making sure that the next 48, or however many we have, we’re going to do everything we can to make it the best,” Dugan said.

Both women grew up with only brothers in the house — and as an adult, Dugan has two sons with her husband and no daughters — so finding that female kinship after such a long time has been very special.

“I always wanted a sister, always,” Morgan-Tilley said. “I would pray, ‘Please, Lord — I need somebody to confide in, I need a best friend.’”

Dugan said her youngest son, Tanner, who is 16 and was diagnosed with autism at age 2, even thoughtfully suggested to her about six years ago that the family adopt a little girl because he thought his mom deserved some female connection.

“He said, ‘Mom, you know, maybe we should adopt a little girl — you need some girl time.’ So it’s like, who knew? Who knew then what was coming? So now I got my person.”

The Agency Launches Debut European Franchise In The Netherlands

By admin
47 mins ago

Go beyond the CMA to win more business