Have suggestions for products that you’d like to see reviewed by our real estate technology expert? Email Craig Rowe.

It’s been almost two years since KW Command was revealed to the industry.

Today, news of a brokerage-built business productivity solution isn’t really news. It’s worth reading about, but it wouldn’t surprise anyone. Unimpressed, agents would want to know how it handles leads, if it can accommodate teams, and whether or not they can send video texts.

In other words, how would it compare to what else is out there? The fact that it’s built and supported by a brokerage isn’t what’s important anymore. And that fact is largely the result of KW Command.

First reviewed a few months after its announcement, the system earned my highest rating, largely because it competes with the industry’s best software providers. A big reason for this is its firm grip on the business it’s designed to serve, where it creates adoption power from waves of data in agent-led beta tests and company-wide idea generation channels.

A batch of new features for Command was rolled out over the last few weeks of the year, and KW agents will notice new capabilities for lead routing, team functionality, SmartPlans and marketing outreach, among other touch-ups and tools.

User engagement was examined in this round of improvements, so KW’s dev team built an onboarding quiz that coincides with the automated tour, creating a multi-pronged approach to adoption for new agents.

An agent’s database gets scored against existing KW agents upon upload, and a rolling task list for feature training is put front and center.

Command’s new SmartPlans suite is also designed to encourage collaboration and colleague support throughout the KW ecosystem. SmartPlans were devised to provide users with a go-to activity resource for common tasks and business responsibilities. 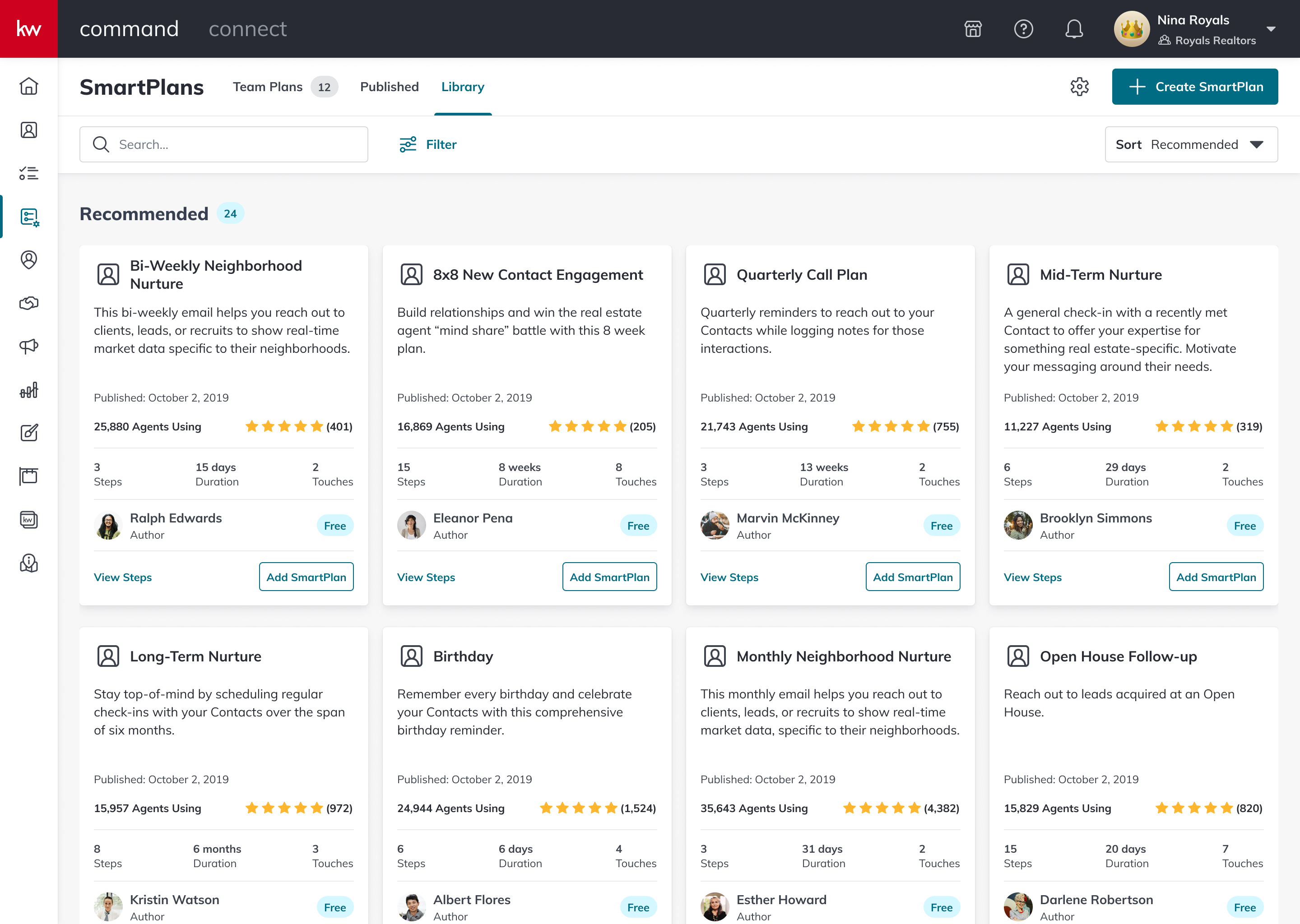 Command now treats SmartPlans like an app store of sorts. Users can browse an extensive library of saved plans (for individuals and teams) on everything from quarterly call plans to open house follow-ups.

Plans can be ranked, too; those earning the most engagement will surface to the top of each search. This shared business intelligence is a great way to encourage new agents, drive internal change and even improve retention.

Team management has been made a priority, too. Members of teams can jump between personal and team-view databases and access exclusive team-owned SmartPlans. Team leaders have improved settings and more granular permission sets defined categorically by “standard,” “enhanced” and “unlimited.” 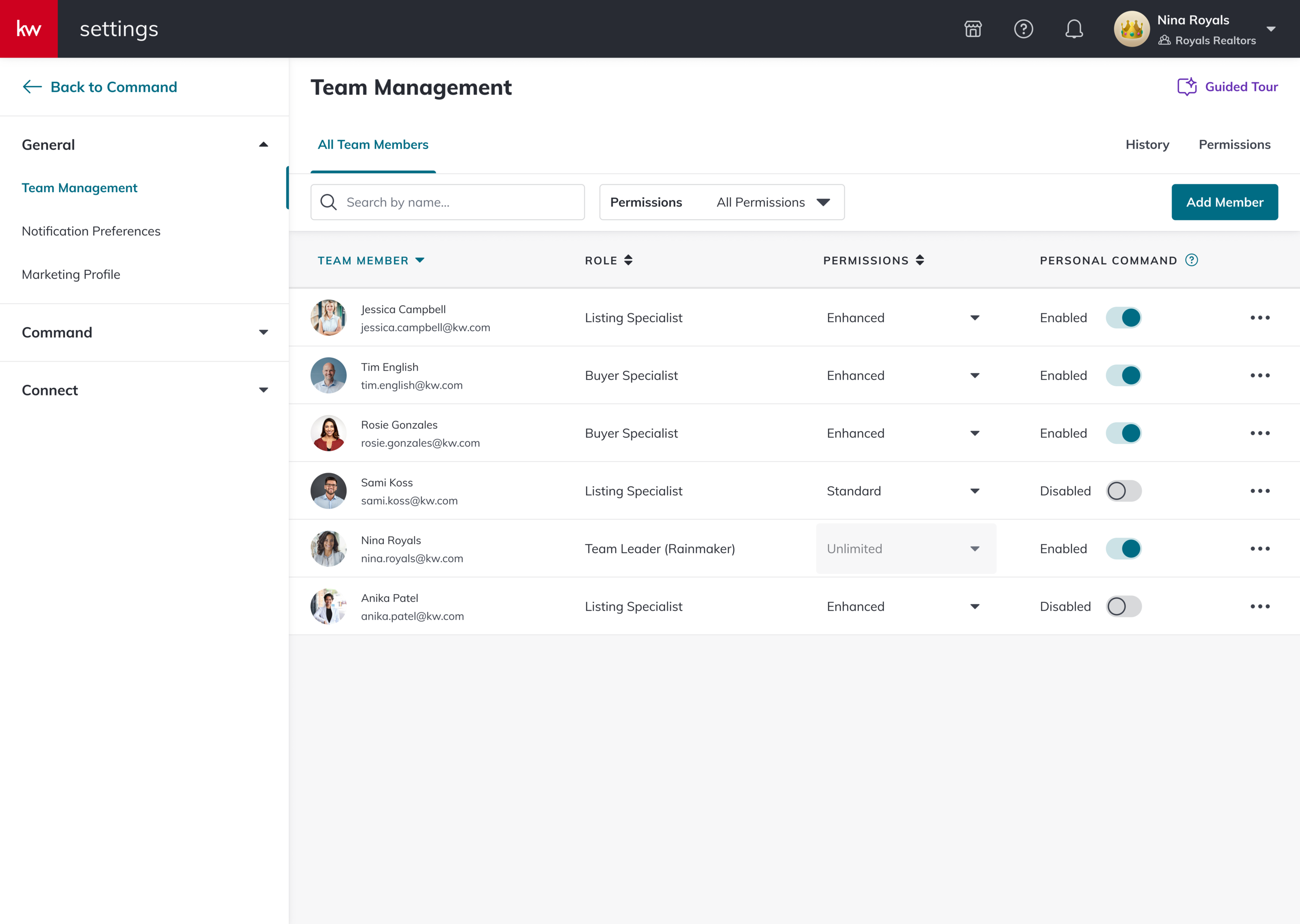 The Designs portal in Command is a Canva-inspired DIY tool for marketing collateral and email template creation. Postcards, landing pages and social graphics can be built, saved, and made part of any outreach effort within the Campaigns module.

Campaigns is where agents will devise and execute digital marketing plans, including paid digital advertising and “quick posts” for blogs and social profiles. 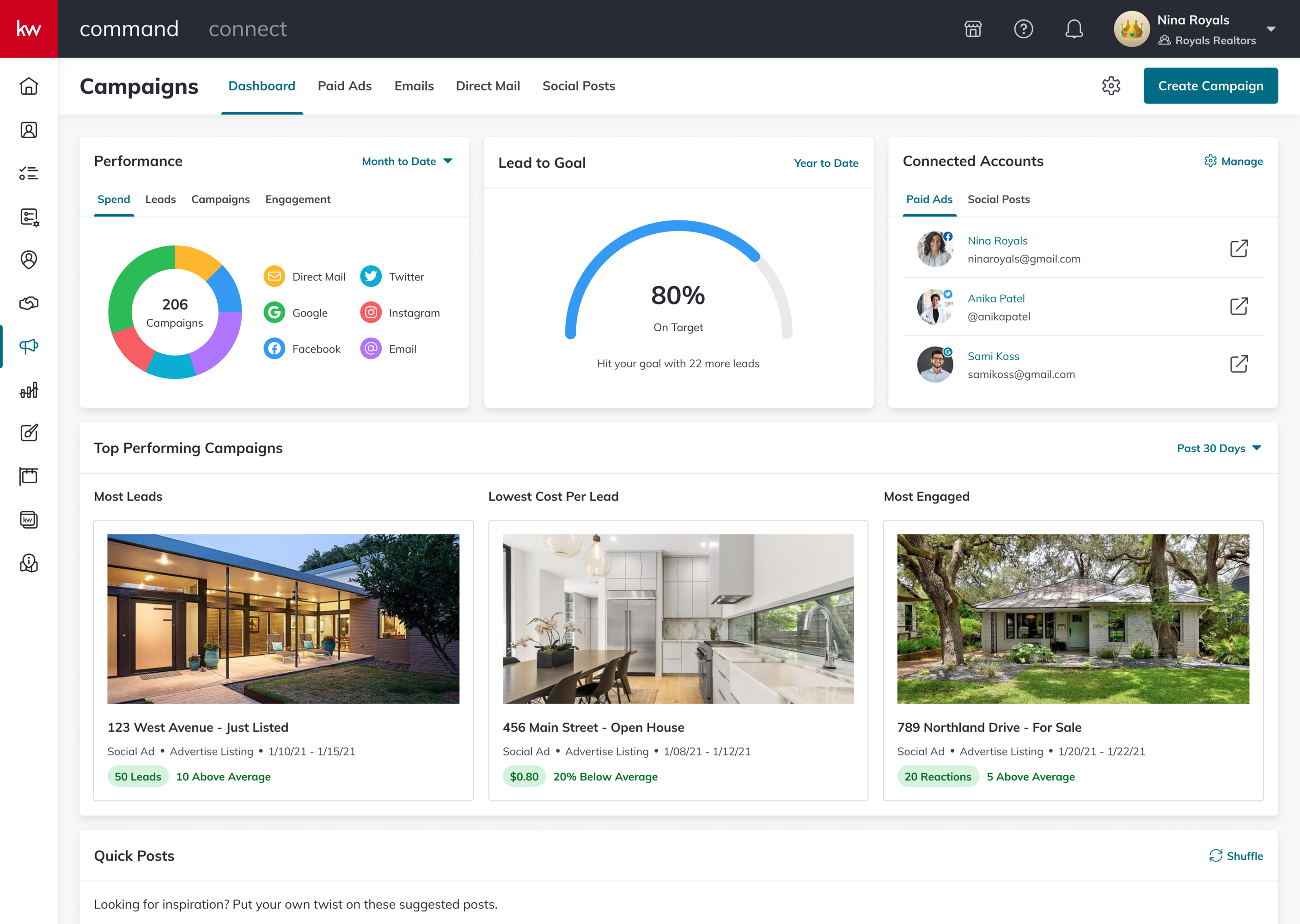 There is also live measurement of campaign performance. Users can sort by cost per lead, most engaged, lead source or most leads, among other metrics.

The idea behind this is to help agents quickly understand the nuances of how budget, message and ad platform coalesce to engage an audience. It pays (literally) to find the right combination and consistently replicate it until it’s time to measure and edit again.

I saw a few more updates in the recent demo, too, such as touch-ups to the consumer app and how transaction milestones are automatically sent to buyers and sellers through the Connect app. 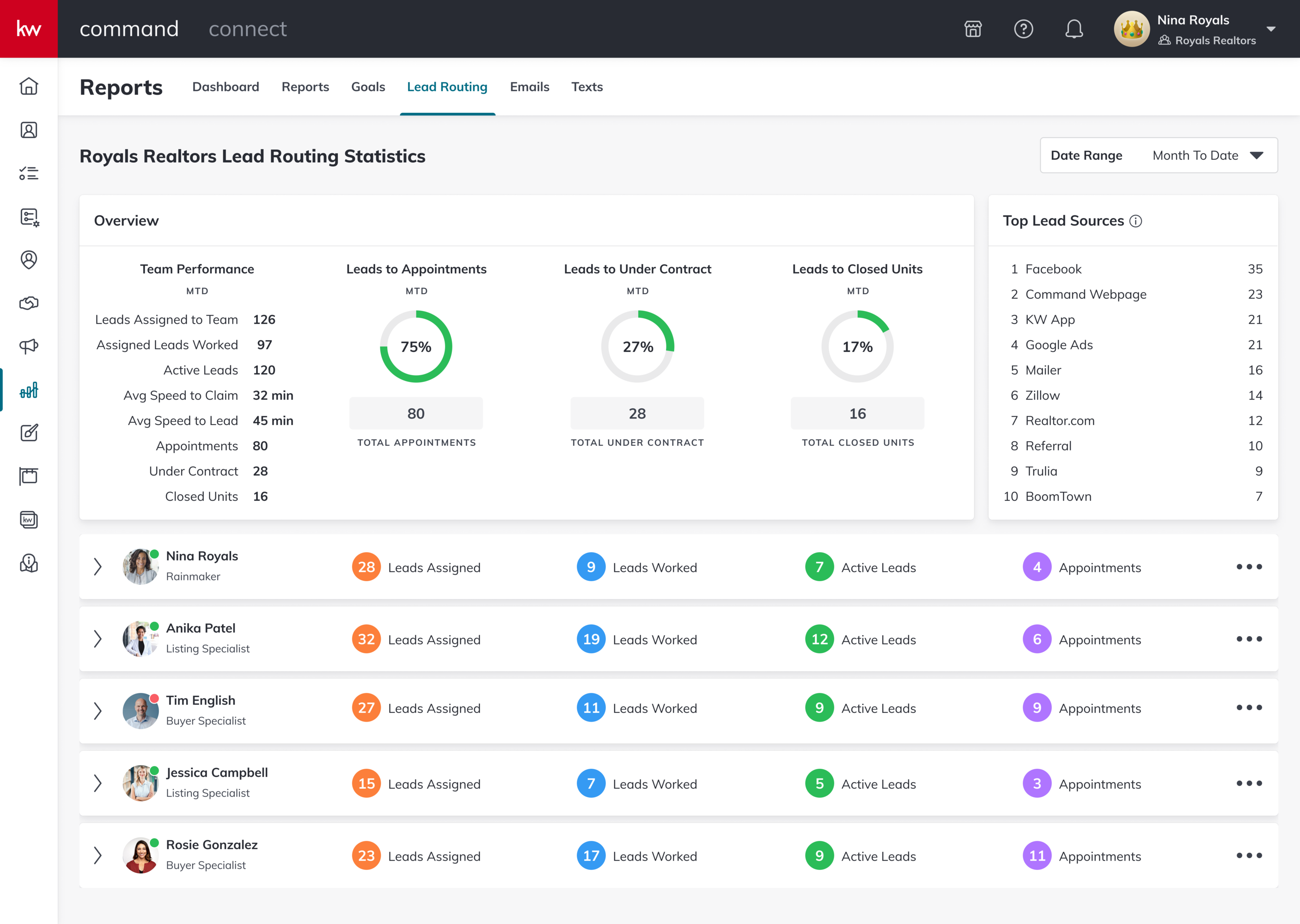 Command’s deeply nuanced features, like its campaign metrics and team oversight settings, help it emulate the functionality in CRMs that individual agents pay hundreds (or more) per month to leverage, that demonstrate Keller Williams’ commitment to improving business through innovation.

According to a text sent by Keller Williams’ spokesperson Darryl Frost, KW associates pay no additional costs for Command, but currently and ongoing, the company will charge a $25 technology fee.

And like those competing software solutions, Command won’t be learned in a day. Or a week. Features are ultimately learned as the agent’s need dictates, and to that end, Keller Williams adoption stats suggest as much.

Two years in, according to an email from Keller Williams’ spokesperson Darryl Frost, Command reported 143,104 active users as of Sept. 30, 2020.

Frost also said that as of Q3, agents had added a cumulative 60.8 million contacts in Command. The Designs suite has seen more than 2 million unique pieces created, while users have built more than 21 million SmartPlans.

KW Labs, the company department where much of Command is strategized and coded, is actively working to continually enhance the SmartPlans library and its mobile apps, as well as sort and consider feedback from its company-wide brainstorming bulletin board, ideas.kw.com.

Have a technology product you would like to discuss? Email Craig Rowe