A New York law firm, working with a housing rights advocacy group, on Wednesday sued dozens of real estate agents and companies — including high-profile players such as Keller Williams, EXIT Realty and a Century 21 franchise — Wednesday over claims of discrimination against lower-income tenants.

Law firm Newman Ferrara filed the suit, which is based on an investigation that non-profit Housing Rights Initiative (HRI) conducted in December and January. The investigation focused on rental housing in Westchester County, immediately north of New York City. The investigation specifically involved HRI “testers” posing as prospective tenants and calling real estate companies. During the calls, the testers asked if they could pay rent with Section 8 housing vouchers, which help lower income Americans afford housing.

The case ultimately names 36 separate defendants. They include numerous individuals, as well as major brands such as Keller Williams and EXIT Realty. Century 21 Dawn’s Gold Realty, a franchise of the Realogy-owned brand, is also named as a defendant in the case.

The suit ultimately argues that the defendants in the case “have explicitly and systematically refused to rent apartments to tenants who intend to pay their rent with government-provided rental assistance.” And as a result, those tenants “have not been able to rent apartments.”

In a statement provided to Inman, Aaron Carr — founder and executive director of HRI — added that for “countless families across the country, there is no home, because real estate companies are refusing to rent to them.”

News of the lawsuit was first reported Wednesday by Vox.

Inman has reached out to defendants in the case and will update this story as they respond.

In addition to its statement, HRI also provided Inman with multiple examples of what it characterized as discrimination against Section 8 voucher holders. 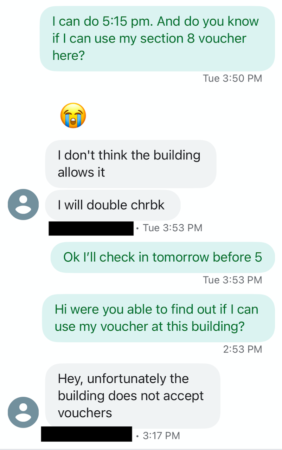 In one example, an investigator posed as a single mother and, according to HRI, texted the Librett Real Estate Group about a rental property. The investigator asked in her text message if she would be able to use a Section 8 voucher at the property.

However, a screenshot of the text thread allegedly shows a representative from Librett responding to say that “the building does not accept vouchers.

In a second example of alleged discrimination, an investigator called a man that HRI identified as a broker for EXIT Realty. In a recording of the call — which is included below — the investigator can be heard telling the broker that she has a Section 8 voucher that will help her pay rent.

However, similar to the text thread, the man can then be heard responding that “they’re not allowing vouchers.”

The documents filed Wednesday mention many other similar situations, with brokers, agents and other company representatives allegedly saying that Section 8 vouchers would not be “accepted” or “allowed” at various Westchester rental properties.

Wednesday’s new lawsuit comes about three and a half months after HRI sued 88 companies and landlords in New York City — including Compass, Corcoran Group and a Century 21 franchise — for allegedly discriminating against prospective tenants who use housing vouchers. That case also involved investigators posing as prospective tenants and then recording conversations with landlords and real estate agents.

Bias more generally has also been much-debated in real estate recently. That’s thanks in part to protests about racial inequality and to revelations — perhaps most notably from an investigation on Long Island — that minority Americans still face significant discrimination in the housing market.

In the case of the latest investigation and lawsuit in Westchester County, HRI said in its statement that the episode “underscores the need for proactive and systematic enforcement on the local, state, and federal level to combat housing discrimination.”

“The lawsuit is calling for real estate companies to abandon their discriminatory housing practices and make apartments available to voucher holders in compliance with the New York State Human Rights Law,” the statement adds.

Documents in the case additionally ask a judge to force real estate entities to abandon discriminatory practices, to modify their policies and to award damages to HRI.

Randolph McLaughlin, an attorney with Newman Ferrara who is working on the case, added in the statement that “these defendants stand between a home and homelessness.”

“With the housing crisis caused by the pandemic and high unemployment, ” he added, “Section 8 voucher programs are needed now more than ever.”