Rising mortgage rates may have put the final nail in the coffin of the mortgage refinancing boom, but not before a last stampede by homeowners looking to cash out equity while rates were still near historic lows.

That’s according to an analysis of mortgage pipeline data by Black Knight, which showed “rate-and-term” refinancing by homeowners seeking to get a better rate without pulling cash out of their homes fell 18.7 percent from August to September, and 57.2 percent from a year ago.

Cash-out refinancing rate locks, on the other hand, dropped by only 6 percent month-over-month in September, and were up 21 percent over the last three months, according to Black Knight’s latest monthly Originations Market Monitor.

Purchase loan rate locks also dipped by 6.1 percent from August to September. But the bigger decline in rate-and-term refis helped drive the overall market share for refinancings back below 50 percent.

The surge in cash-out refis in July and August had pushed the overall refinance share of the market mix above 50 percent in August for the first time since February.

But with the Federal Reserve recently signaling that it could start tapering its purchases of mortgages and Treasurys as soon as November, mortgage rates could keep climbing — making rate-and term refinancing less attractive to many homeowners.

“According to our OBMMI daily interest rate tracker, interest rates rose throughout much of September, with the average conforming 30-year offering climbing 16 basis points to hit 3.2 percent by month’s end,” said Scott Happ, Black Knight’s head of secondary marketing technologies, in a statement. “Climbing rates drove down rate lock volumes across the board in September, but the largest decline was seen – once again – in locks on (rate-and-term) refinance loans.” 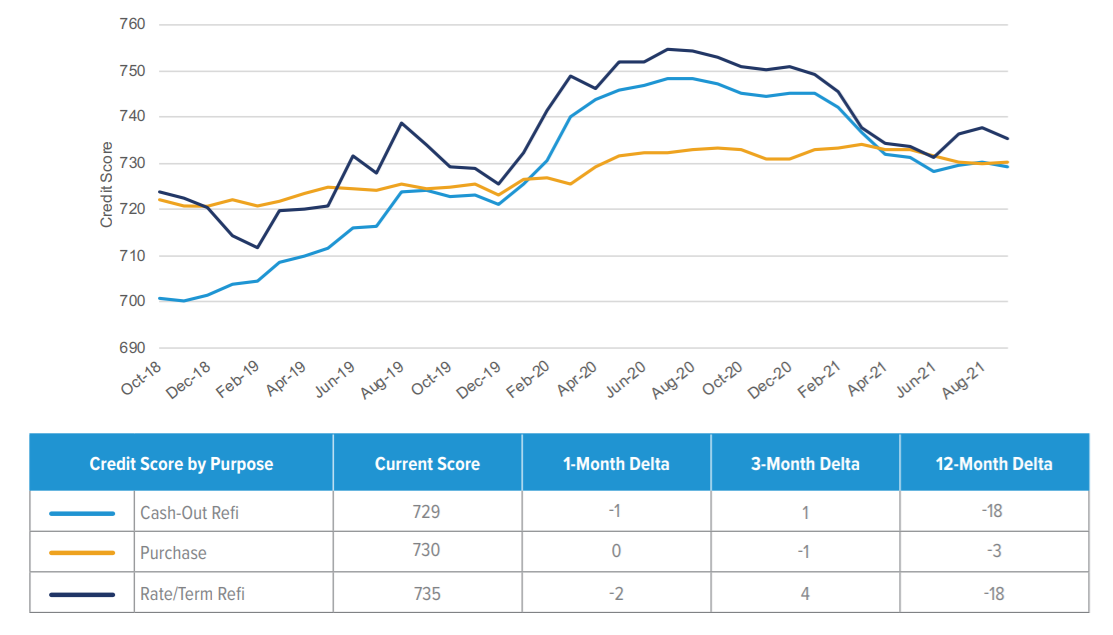 “We’ve noted the ‘psychological threshold’ of sub-3 percent rates in the past, with movement below that line triggering increased lending activity,” Happ said. “What we’re seeing now represents the other side of that coin in a certain sense. It remains to be seen how much higher rates will climb – and how quickly – and in turn, how borrowers will react. It will also be important to see how and to what degree historic equity stakes and modest increases to for-sale inventory will impact cash-out and purchase lending in the coming months.”

In a separate report tracking mortgage performance, home prices, and affordability, Black Knight noted that while more listings are gradually coming on to the market, rising home prices and interest rates could have a dramatic impact on affordability.

The monthly payment required to purchase the average priced home with a 20 percent down payment and a 30-year fixed rate mortgage increased by nearly 20 percent over the first nine months of 2021, to $1,297, Black Knight’s August Mortgage Monitor reported.

“It now requires 21.6 percent of the median household income to make the monthly mortgage payment on the average home purchase, the least affordable housing has been since 30-year rates rose to nearly 5 percent back in late 2018,” Black Knight analysts warned. “If home prices and incomes hold steady, but interest rates climb to 3.5 percent, the average monthly payment would rise more than $100 and affordability would hit a 12-year low.”

If 30-year mortgages hit 4 percent, the payment-to-income ratio would climb above its 1995-2003 average. At 5 percent, affordability would reach the lowest levels on record outside of the 2004-2008 housing bubble.

“Historically low interest rates have made today’s home prices manageable from an affordability perspective, but a sharp rise in rates unaccompanied by comparable income growth could tip the balances, underscoring the tightrope the Fed must walk as it looks to exit its accommodative stance in coming quarters,” Black Knight analysts concluded.

Although new listings were up 4 percent in August from a year ago, they remained 9 percent below pre-pandemic levels from 2017 to 2019. That’s better than the 25 to 30 percent deficits in new listings seen from January through May, but is still “substantial.”

There were still 1.578 million homeowners in pandemic-related forbearance plans in September, and many are hitting their 18-month program limits this year.

More than 300,000 homeowners were scheduled to leave forbearance in September, with an additional 210,000 plans expiring in October and 137,000 in November.

That’s not expected to produce a crush of foreclosures, however, since loan servicers must reach out to borrowers who are 120 days behind on their payments and give them a chance to apply for assistance, such as a loan modification.

The double-digit annual home price appreciation seen during the pandemic means many homeowners have more equity in their homes — even if they’ve put their mortgage payments on hold — which could help them avoid losing their homes.

Black Knight estimates that only 7 percent of homeowners in forbearance have less than 10 percent equity in their homes, even after missing 18 months of deferred payments. High-equity borrowers are more than 40 percent less likely to lose their home through a foreclosure, deed-in-lieu, or short sale than those with weaker equity positions, the report said.

Lenders did initiate foreclosure proceedings on 7,100 homeowners in August, a 69 percent increase from July, when moratoriums on foreclosures were lifted. But the increase in foreclosure starts “was almost solely driven by servicers restarting the process on loans that had already been in foreclosure prior to the COVID-19 federal moratoria,” Black Knight analysis noted.

How the pandemic sharpened global focus on rewilding our urban spaces

How To Get The Most Out Of Your Real Estate Conference: 10 ICLV tips