Even as the economy heaves under the weight of the pandemic, home prices are growing at rates unseen in years.

According to the latest numbers released by data analytics provider CoreLogic, home prices across the United States grew by 7.3 percent in October — a significant jump compared to 3.5 percent growth seen in October of last year and 4.9 percent in June of this year. Given that this type of growth has not been seen in the country since April 2014, the coronavirus outbreak does not seem to have stalled home value increases as was once feared at the start of the pandemic.

The reasons, according to CoreLogic, have to do primarily with historically low mortgage rates and a lack of inventory on the market. While the pandemic pushes sellers to hold off on placing properties on the market, buyers are just as eager to get into the market and are trying to get an edge on competitors by making higher and higher offers.

“Home buyers have been spurred by record-low mortgage rates and an urgency to buy or upgrade to more space, especially as much of the American workforce continues to work from home,” Frank Martell, president and CEO of CoreLogic, said in a prepared statement. “First-time buyers in particular should remain a big part of next year’s home purchases, as the largest wave of millennials is heading into prime home-buying years.”

Certain areas, particularly in the Southwest, saw even bigger spikes in home value growth — Phoenix saw increases of 12.1 percent while Maine, Idaho and Arizona saw growth of 14.9 percent, 13.1 percent and 12 percent, respectively. That said, areas which rely heavily on the tourism and entertainment industries were much harder hit and saw a cooling of home value growth. Cities like Prescott, Arizona; Lake Charles, Louisiana; and Miami are at particular risk of seeing prices drop sometime in the next year. 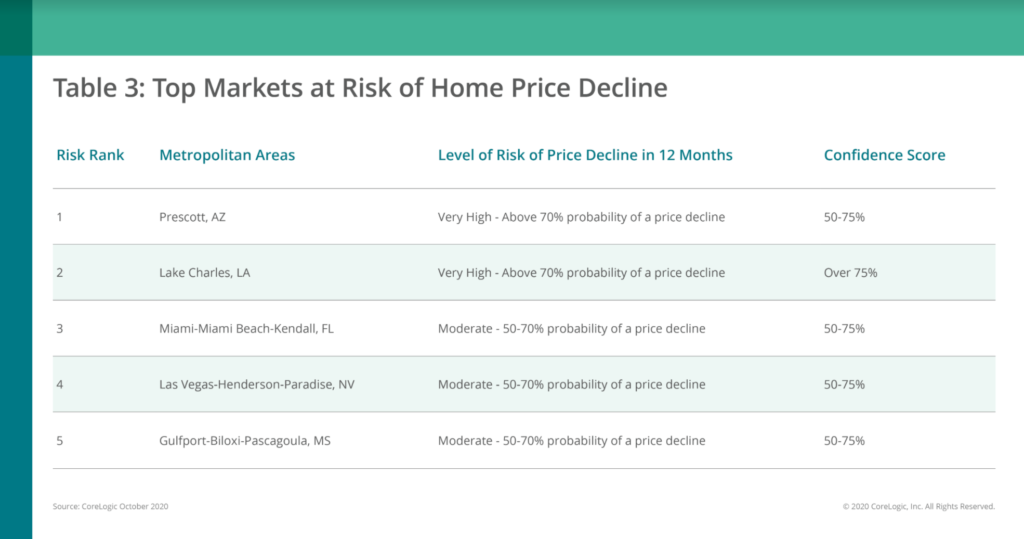 As the numbers show, the demand for housing is sky-high and creating a hot market. But CoreLogic’s economists still predict that, as the pandemic’s effects on the economy set in and more sellers hope to tap into the market, prices could cool to 1.9 percent growth by this time next year.

“The pandemic has shifted home buyer interest toward detached rather than attached homes,” Dr. Frank Nothaft, chief economist at CoreLogic, said in a prepared statement. “Detached homes offer more living space and are typically located in less densely populated neighborhoods. And while prices of single-family detached homes posted an annual increase of 7.9 percent in October, the price of attached homes rose only 4.5 percent year over year.”

By admin
1 second ago