Buyer agent commission rates are largely the same across nearly two dozen U.S. cities, indicating a lack of competition in the industry, according to a consumer watchdog report.

The Consumer Federation of America examined more than 10,000 home sales recorded in multiple listing services in 21 cities across the eastern half of the U.S. for its report, “The Relationship of Residential Real Estate Commission Rates to Industry Structure and Culture, and found that buyer agent commission rates were “highly uniform” with the typical total commission in these cities ranging between 5 and 6 percent.

CFA studied 500 consecutive sales of single-family, condo or co-op sales in each city starting from the date it received the MLS data — between August and October 2021, depending on the city — and working backward, Stephen Brobeck, a CFA senior fellow and the report’s author, told Inman. Brobeck hired Derek Eisenberg, a Realtor and broker at Continental Real Estate Group, as a consultant to research and send him recent MLS sold residential listings in specific cities. Eisenberg’s brokerage mainly works in eastern states.

“I have always been a pro-consumer broker and am not shy about trying to bring down the price of selling a home,” Eisenberg told Inman.

The CFA report said industry rules — particularly the sharing of commissions between listing brokers and buyer brokers in which homesellers pay the commissions of both the listing agent and the buyer agent — strongly support rate uniformity across the country. CFA pushes for the uncoupling of commissions to spur price competition and potentially save consumers thousands of dollars per home sale, or tens of billions of dollars annually combined.

Consumers currently pay an estimated $100 billion in commissions per year. CFA expects that with more competition, median commission rates would go down to between 3 and 4 percent.

“The current commission system is designed to thwart price competition among agents,” said Brobeck said in a statement. “If home buyers were allowed to negotiate their agent’s commission, agents would be encouraged to compete on price and service.” 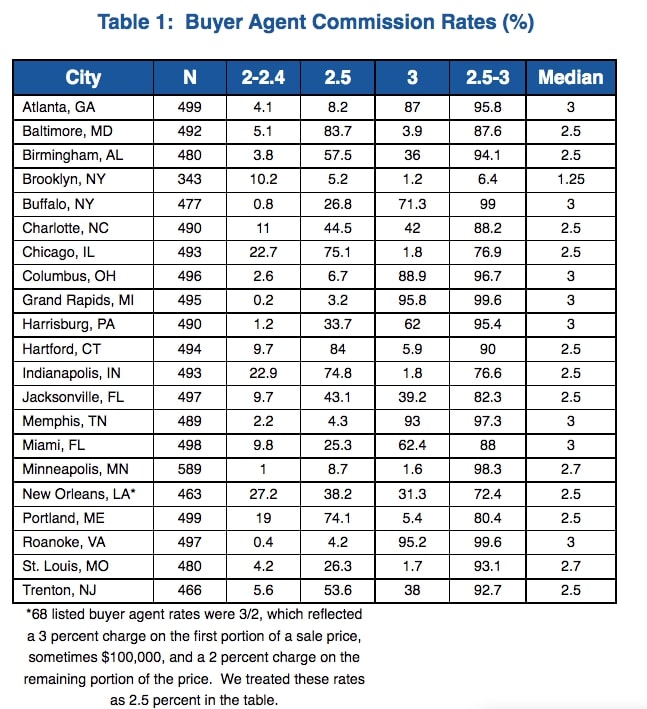 Asked whether commission rates were fixed during a press call, Brobeck said, “Well, they appear to be fixed in those areas where there’s no variation at all of the rate. But they’re fixed really — formally, because of many factors, some are formal, and others are informal. So it’s really difficult to identify a smoking gun here, but you know proof is in the pudding. 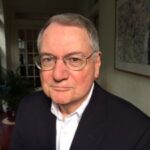 “If the rates are all similar there’s clearly price-setting going on. It’s not, however, one person telling everyone else: Charge this price. It’s a number of factors that come together, which are understood by industry leaders.”

Under a rule set by the National Association of Realtors, listing brokers that submit listings to MLSs must offer buyer brokers a blanket, unilateral offer of compensation. NAR does not specify what that compensation should be and stresses that it is negotiable, but the rule itself has become a flashpoint.

NAR is currently defending itself from multiple antitrust lawsuits from homesellers and a homebuyer that seek to have homebuyers pay their broker directly, rather than have listing brokers pay buyer brokers from what the seller pays the listing broker — a move that could upend the U.S. real estate industry by effectively forcing changes in how buyer’s agents are traditionally compensated.

The U.S. Department of Justice has launched an antitrust investigation of NAR’s MLS rules, including this rule on buyer broker commissions, and NAR has sued the agency to stop the probe.

The Biden Administration has also directed the Federal Trade Commission, which shares responsibility over antitrust with the DOJ, to exercise its rule-making authority “in areas such as … unfair occupational licensing restrictions; unfair tying practices or exclusionary practices in the brokerage or listing of real estate; and any other unfair industry-specific practices that substantially inhibit competition.”

NAR’s rule requiring listing brokers to offer commissions to buyer brokers in order to participate in Realtor-affiliated MLSs discourages both buyers and sellers from negotiating lower commissions, according to CFA.

“[B]uyers are usually told, if they ask their agent, that sellers pay the agent’s commission,” the nonprofit said. “Sellers, on the other hand, are informed by their listing agents that lowering this buyer compensation will risk buyer agents ‘steering’ their clients to higher-commission properties.”

Citing a 1983 report from the FTC, the report said the real estate industry promotes a “cooperative” culture in which agents are expected to be “team players.”

“Company policy manuals often constrain rates charged, and agent scripts explain how agents can avoid negotiating lower rates,” the CFA said. “A core norm of the industry culture is not talking or writing about commission rates, which helps explain why very few firms, except discounters, advertise commission rates, disclose them on websites, provide them to inquiring consumers who call firms, or typically discuss them at all with home buyers.”

The CFA report stressed that in a price-competitive market, there would be a lot more variation in commission rates because agent costs and the quality of agent services vary greatly.

“Listing agents can do as little as develop and post a listing on the local MLS then wait to be contacted by buyer agents,” the report said. “At the other extreme, as well as posting the listing, they can arrange high-quality home photos and video, develop and distribute sales materials, hold open houses, plan home ‘staging’ (including bringing in new furniture), and/or actually meet customers with an interest in purchasing the home.”

Similarly, buyer agents can show clients one home or well over a dozen, the report noted.

“Another important variable is the amount of time the client wishes to communicate with the agent. This time can vary, after initial meetings, from practically nothing to very frequent, even daily,” the report said.

Meanwhile, agents receive the same compensation regardless of their skills, qualifications or level of representation.

“Experienced agents typically charge the same rates as agents who have just received their license,” the CFA said. “In home sales, some agents are fiduciaries with total loyalty to clients while other agents work as dual agents or transaction brokers, with loyalty to neither seller nor buyer. Fiduciaries, in general, deserve higher compensation.”

At the same time, how much an agent works doesn’t affect compensation either, the report noted.

“Agents may work the same amount to sell an inexpensive property as they would to sell an expensive one, yet are often compensated at the same commission rate,” the report said.

The CFA report suggests that uncoupling commissions would encourage buyers to negotiate compensation with their agents rather than having commissions baked into listed prices and would make discounters better able to compete.

“That would lower home sale prices, and both the mortgage and real estate industries would ensure that these commissions could be included in mortgages whose amount financed would not need to increase,” the CFA said.

“The uncoupling of rates would also free listing agent discounters from the shackles of current industry rules that force them to charge typical buyer agent rates. Over time, there would be a much wider variation in rates (and service options) reflecting agent experience, work, effort, representation, and willingness to compete on rates.”

Two weeks ago, NAR changed its rules to prevent buyer agents from saying their services are free unless they won’t receive any compensation from any source for them and to allow agents and brokers to publish buyer agent commissions on their websites if they choose.

“This new guideline further bolsters transparency and Realtors’ existing duties and practices to talk with their clients about what services they provide and how they are compensated,” Mantill Williams, NAR’s vice president of communications, told Inman via email.

Still, CFA said that while the changes would discourage agents from steering consumers to higher-commission properties, they would still “not permit significant rate competition because buyers would still not pay, or be able to effectively negotiate, compensation of their agents.”

Williams pushed back against CFA’s assertions, saying, “The market decides commission rates. By way of analogy, check out how common prices are for services like optometrists in your neighborhood — they simply know the market value of their services.

“Commissions are always negotiable and consumers have the choice of who they want to pay and how they want to pay them. Because of the pro-consumer local MLS broker marketplace model, and options like a success fee, there is unprecedented competition among real estate agents, especially when it comes to the service and commission options available to consumers.”

He went on to say that real estate commissions are complex and depend on multiple factors, including market conditions, type of representation and types of services provided, among others.

“Because consumers have a multitude of choices in service and fee models, they also have many choices regarding payment for real estate services and which broker with whom they want to work,” Williams said.

He noted that “Commissions fluctuate over time, including having decreased steadily in recent years” and pointed to Real Trends’ report that the average commission in the U.S. fell to a new low of 4.94 percent in 2020.

But CFA’s report questioned the accuracy of Real Trends’ commission estimates, citing studies from other sources and Real Trends’ practice of estimating a national average rate by dividing gross commission income by the sales price.

“Much research has shown that Realtors tend to charge lower rates on high-priced properties, which would depress the estimated average rates of Real Trends,” the CFA report said.

“To use an exaggerated example: Using the apparent Real Trends method, the average rate for a sample of a one million dollar sale at 4 percent and ten $100,000 sales at 6 percent would be only 5 percent. This rate may have meaning for Realtor income but would mislead the general public about typical commission costs.”

NAR and others who oppose the decoupling of commissions will often suggest that the result would be fewer buyers able to afford to buy a home if they have to come out of pocket for their agent’s commission.

“Forcing buyers to take on the additional out-of-pocket expense would cause them incredible hardship and would freeze many, particularly first-time and low- and middle-income homebuyers, out from an already competitive market,” Williams said.

“That could also force homebuyers to forgo professional help during what is likely the most complex and consequential transaction they’ll make in their lifetime.”

But Brobeck told Inman that would be an “easy” issue to address because everyone involved will be invested in figuring out solutions.

“Buyers will end up paying less because home sale prices will no longer include buyer agent commissions and because buyers will now be able to negotiate down typical 2.5 or 3.0 commission rates,” he said.

“Any regulatory barriers to financing these commissions will quickly disappear because of the combined political efforts of the real estate and mortgage industries, which will face little or no opposition,” he added.

Brobeck said CFA plans to follow up its research with a report on commission rates in the western half of the U.S. The watchdog will also be examining more carefully commissions in New York City, due to its high prices and the influence of the non-Realtor Real Estate Board of New York (REBNY), and Florida, “where transaction brokerage is widely practiced but rates remain the same as in many areas dominated by fiduciaries,” Bobeck added.