More than nine out of 10 mortgage lenders offer online applications, but a surprisingly large proportion of their customers aren’t using them — or shopping with more than one lender for the best rate.

That’s according to a survey of 147 lenders and 2,000 consumers by ICE Mortgage Technology, a provider of data, technology and expertise that enables lenders to automate their processes.

The survey found stronger growth in adoption of online portals for electronically signing and notarizing documents, with 61 percent of borrowers taking advantage of such opportunities, up from 56 percent in 2018.

But half of lenders at large institutions (defined as having 200 or more employees) said less than 50 percent of their loan applications were submitted online.

It’s not just that people are uncomfortable with technology — almost half of those who didn’t choose to fill out an online application said they just prefer to work directly with a person (46 percent), while one-third said they prefer paper forms.

Most who did take advantage of the opportunity to use an online application said they liked the simpler application process (55 percent) and quicker time to close (53 percent). During the pandemic, the ability to avoid an in-person meeting was also more likely to be seen as a plus (49 percent) than was the case in 2018 (37 percent). 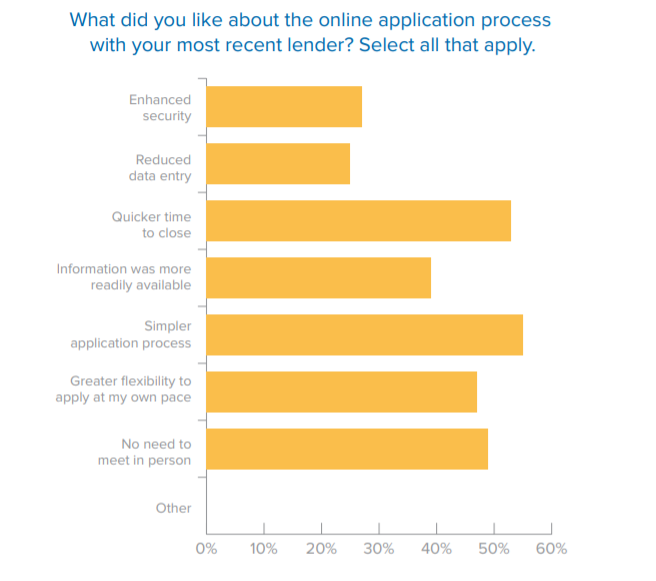 Just because you can fill out an application online doesn’t mean it’s easy to round up all the required information. More than half of borrowers (54 percent) who used an online application said they needed multiple sessions to complete it, due to missing information. That’s down from 64 percent in 2018 — possibly because lenders are increasingly automating the collection of documentation needed to process loan applications.

Not shopping for the best rate

With almost all lenders offering online applications, you might think that more borrowers would shop around for the best rate. A 2018 study by Freddie Mac found that getting one additional rate quote can save homebuyers an average of $1,500 over the life of a loan, and getting five quotes saved $3,000.

The ICE Mortgage survey found that borrowers were more likely to consider just one lender in 2020 (41 percent) than they were in 2018 (39 percent). Only one in five borrowers considered more than two lenders. 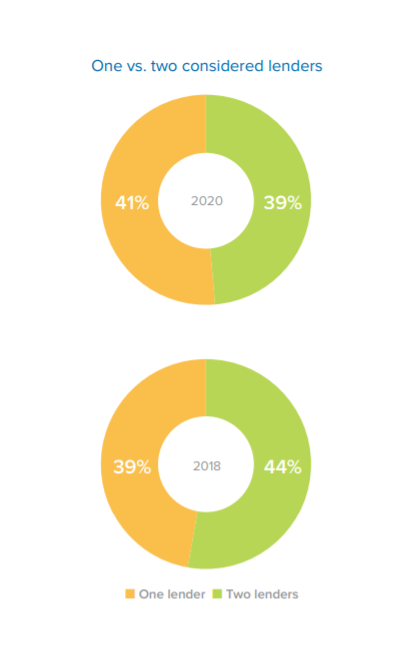 One third of borrowers (32 percent) went with an existing bank or lender relationships when choosing their lender, followed by online searches (30 percent) and Realtor referrals (23 percent).

While a surprising number of borrowers aren’t taking advantage of the opportunity to apply online, it’s still an important selling point, particularly for younger consumers.

While only 35 percent of Baby Boomers said they would base their lender decision on whether they offered a digital solution, 51 percent of Gen Xers and 70 percent of Millennials said it would affect their decision.

Another interesting takeaway for real estate agents and brokers: More than half of renters (53 percent) think they need to put more than 10 percent down to buy a house, and 27 percent think a down payment of at least 20 percent is required.

Renters continue to be an untapped market, the survey found, as they “lack understanding of or have been miseducated about the home-buying process – including available loan options, average credit score, downpayment requirements, and more.”