The company, which went public last year, pulled in $49.6 million between January and March — a 72 percent increase year over year.

Fathom Holdings, parent of cloud-based brokerage Fathom Realty, announced Thursday that during the first three months of 2021 its revenue jumped 72 percent year-over-year, and that it also saw significant growth in its agent count and number of completed transactions.

In total, the company pulled in $49.6 million between January and March, the report reveals. That’s up from $28.8 million during the same period in 2020, though it is down slightly from the fourth quarter of 2020, when the company earned $53.4 million in revenue.

Additionally, Fathom closed 6,900 transactions during the quarter, up 60 percent year-over-year, and grew its agent network to 6,045, up 42 percent.

The company ultimately saw a net loss during the first three months of 2021 of $3.4 million, up from about $43,000 last year during that same time.

Analysts had expected the company to bring in $44.15 million in revenue during the quarter, meaning the company handily beat forecasts.

In the report, Founder and CEO Josh Harley said that “our first quarter results once again demonstrate the power of our truly disruptive model.” “We’ve been working hard to deliver on our promises and to grow Fathom in an accelerated, yet sustainable fashion for the long-term, and our results demonstrate our ability to do just that,” Harley continued.

In a call with investors Thursday afternoon, Harley added that the first quarter “proved that we’re just getting started.”

Heading into Thursday’s report, Fathom’s shares fell by a little over a dollar, closing out the day at just just over $26. That was also down for the week. And like many other real estate companies, Fathom’s stock price peaked in February — shares were trading at more than $54 at the time — and have seen a general downward trajectory since. 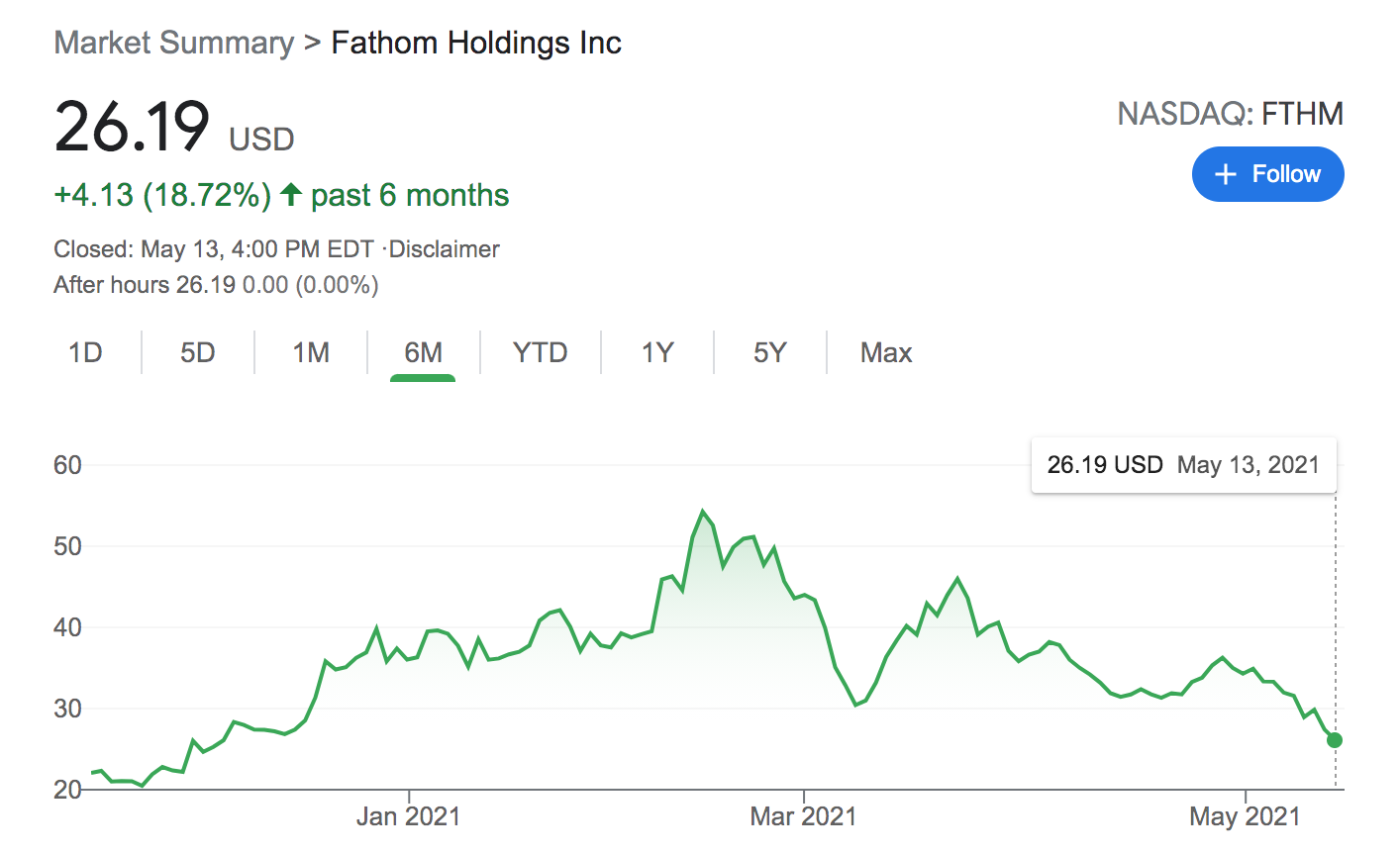 In after hours trading, Fathom’s shares fell further, to around $25.50, after the company announced its earnings.

As of Thursday afternoon, Fathom had a market cap of just over $366 million.

Fathom went public last July. At the time, Harley said the company planned to use the its stock market debut “to continue to focus on growing our agent count and revenue, improve our offering to agents to help them become more productive, as well as find ways to attract more buyers and sellers.”

Just a few months later, Fathom’s first earnings report after its initial public offering (IPO) showed that it saw a 74 percent increase in revenue during the third quarter of 2020.

Fathom has also made a number of acquisitions since its IPO, including of E4:9 Holdings, Naberly Solutions, LiveBy and others.

In Thursday’s investor call, Harley said his company now has “all the pieces of the puzzle we need,” and that “now we need time to put them together.” Moreover, future acquisitions will focus “on real estate agents, loan officers and title personnel.”

Harley also said headwinds such as rising mortgage rates and home prices could give Fathom an edge, or even prove to be tailwinds for the the company. That’s because, he argued, Fathom charges “a fraction of what other brokerages charge their agents.” And that should make the company more attractive if agent income gets squeezed, he said.

“We believe this gives us a faster path to profitability,” Harley continued, adding later that, “We should continue to cannibalize the real estate companies with an old traditional model at a faster rate.

Update: This post was updated after publication with additional information from Fathom’s earnings call.

NAR: Housing Market Is ‘Topping Out’ Due To Inventory Shortage