Even though employment rates have picked up significantly since the start of the pandemic, delinquencies across the country are sky-high compared to last year.

According to the latest report from property analytics provider CoreLogic released on Tuesday, 5.9 percent of mortgages across the country were in a state of delinquency in November 2020. This number is slightly lower than the 6.1 percent seen in October, but still a significant 2 percent jump from the same time last year.

The surge in delinquencies comes even as unemployment dropped from 14.8 percent at the start of the pandemic to 6.7 percent at the end of 2020. Various anti-foreclosure and government forbearance programs helped prevent an immediate foreclosure and homelessness crisis — the number of early-stage delinquencies is actually down to 1.4 percent from 2 percent in 2019 while foreclosure rates are down to 0.3 percent from 0.4 percent last year — and are what is allowing many homeowners who lose jobs amid the pandemic to stay afloat now.

“The consistent decline in serious delinquency since August is a sign of growing financial stability for families,” Frank Martell, president and CEO of CoreLogic, said in a press statement. “In addition to ensuring that homeowners stay in their homes, the decline in delinquency means fewer distressed sales, which is both a positive for individual households and the overall housing market.”

While much higher than last year, the overall delinquency rate is the lowest it’s been since April. That said, the numbers are an indication of the programs’ effectives rather than the fact that widespread unemployment isn’t affecting homeowners’ ability to make mortgage payments.

Missed payments stack up and can create a financial hole for homeowners for years to come. Serious delinquencies, in which mortgage payments are late by more than 90 days, surged to 3.9 percent from 1.3 percent in 2019. 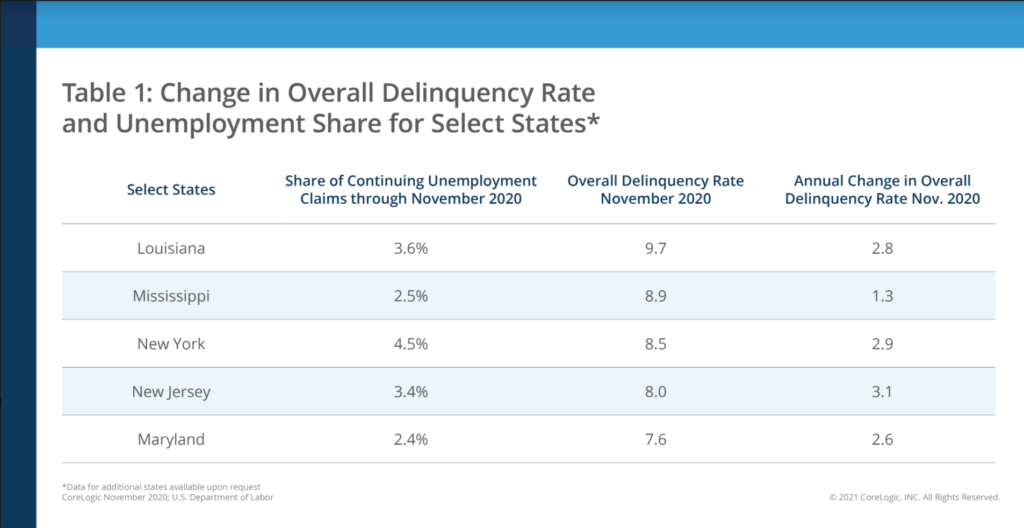 States that are heavily dependent on entertainment and tourism as well as those that have large numbers of residents who work in the oil and gas industries saw the biggest spikes in unemployment and, consequently, delinquencies. While all states saw their numbers increase, Hawaii and Nevada topped the list at 4.3 and 4.2 percent, respectively.

“Urban areas hit hard by the pandemic recession or by a natural disaster experienced the largest spike in delinquency over the last year,” Dr. Frank Nothaft, chief economist at CoreLogic, said in a press statement. “Forbearance and loan modification helped struggling families rebuild their financial house in hard-hit places. While vaccination will mitigate the pandemic, the best cure for delinquency is income restoration through job creation.”