The next two years will see gross domestic product (GDP) rise, mortgage rates inch back up and the unemployment rate fall as the country continues to recover from the COVID-19 pandemic, according to the National Association of Realtors’ (NAR) “consensus forecast,” which surveyed 20 economists.

A significant amount of macro uncertainty remains around the rollout of a vaccine and the unchecked spread of COVID-19 that killed more than 3,000 individuals on Dec. 9.

The forecast predicts that unemployment will fall to 6.2 percent for the full year of 2021 and down to 5 percent in 2022, but in the near-term, job gains are already beginning to diminish, which suggests the benefits and savings from the initial stimulus package are starting to wear off, according to NAR Chief Economist Lawrence Yun.

“The stimulus would certainly keep the economy on a positive path until we get vaccine distribution and then would be a home run when we get the vaccine, to get us back to normal life,” he added.

Dana Peterson, the chief economist and center leader of economy, strategy and finance at The Conference Board, says her own forecast anticipates growth will be less than one percent over the winter and incoming data from labor markets suggest job growth is slowing.

If stimulus talks end and protections for individuals unable to pay rent or in mortgage forbearance aren’t extended, projections over the first and second quarters could be weaker, Peterson said.

David Berson, the senior vice president and chief economist at Nationwide Mutual, echoed the need for stimulus during the economic outlook panel at NAR’s virtual forecast summit. He said he doesn’t believe the economy will enter another recession but could hit another soft spot.

“I think passing more fiscal stimulus is important to get us through that,” Berson said. “But given that, the vaccines are coming and that soft patch will probably not last very long.” 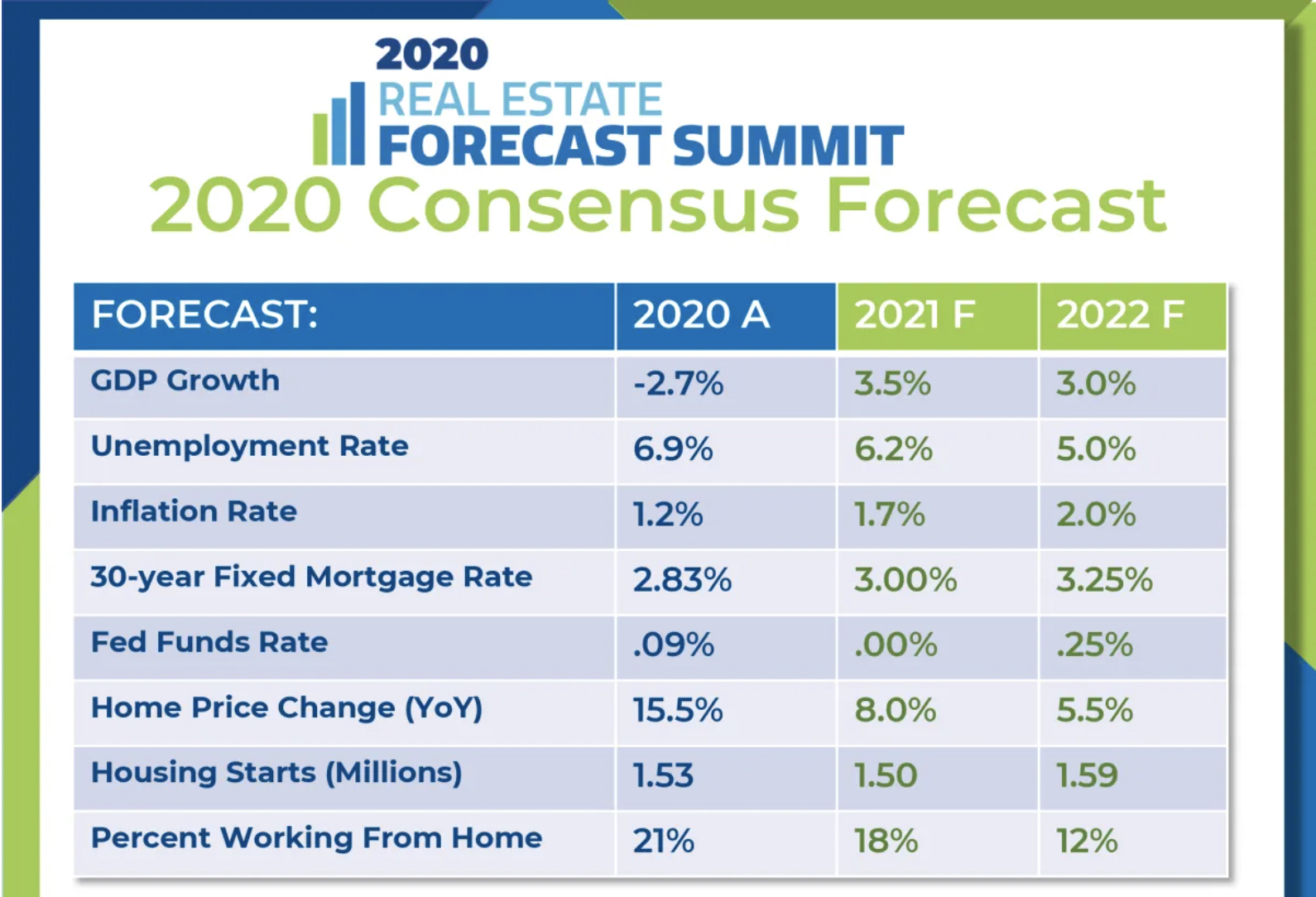 NAR’s forecast also predicts mortgage rates will rise from their historic lows, but not significantly in the next year. The forecast believes the average rate for a 30-year fixed-rate mortgage will hover around 3 percent in 2021 and climb to 3.25 percent in 2022.

Still, despite the low rates, affordability challenges will linger, especially for first-time homebuyers, given the K-shaped nature of the economic recovery, according to Nela Richardson, the senior vice president and chief economist at ADP and former chief economist at Redfin.

Low-income workers are seeing four times the unemployment rate as high-income workers, and both older and younger people are being hit the hardest.

“We may still see some long-term effects for first-time buyers who were hit hard, just like we saw after the Great Recession,” Richardson said. “Those hit hardest by this pandemic, they may be slower to regain their footing, get those jobs back and buy homes over the longer run.”

Part of the affordability challenges hurting the real estate industry come directly as a result of low inventory, which is pushing home prices up, according to Yun. The consensus forecast believes home price growth will continue in the next two years, growing 8 percent year-over in 2021 and 5 percent in 2022.

“There’s no danger of a price decline,” Yun said.

“At some point, if home prices continue to outpace people’s income growth, then we will run into affordability challenges, especially if the mortgage rate no longer declines,” Yun said.

The forecast also believes that the Federal Reserve’s Open Market Committee will inch rates up slightly, but only to 0.25 percent by 2022, which shouldn’t have a substantial impact on slowing any economic recovery, according to Berson.

The share of the U.S. workforce that opts to work from home will fall slightly, to 18 percent, in 2021 and then plummet further to 12 percent in 2022. That’s still far ahead of the estimated 5 percent of the workforce that worked from home in 2019, according to the forecast.

As part of the economic forecast, NAR and the 20 economists surveyed also identified 10 metro markets expected to perform the best in the next year, based on a number of factors, including domestic migration, low unemployment, mobility and a host of other factors.

Phoenix, Arizona, was chosen as the top market by the group of economists.

A Psychedelic Blast From The Past — Carpet In The Bathroom Included