The company pulled in $499 million in revenue during the third quarter of this year. That’s a 17 percent jump compared to last year at the same time.

Commercial real estate giant and growing Zillow rival CoStar announced Tuesday that it took in $499 million in revenue between July and September, making those months the company’s best quarter for revenue in at least the past two years.

The company revealed its earnings in a third quarter report published Tuesday afternoon. The report shows that CoStar’s revenue for the quarter was up 17 percent year over year. The third quarter also beat every other prior three-month period from both this year and 2020.

The report further notes that CoStar brought in $64 million in net profit between July and September of this year. That’s up compared to both one year ago and last quarter, but short of the highs achieved during the first quarters of both this year and 2020.

In the report, company founder and CEO Andrew Florance described “another great quarter of strong results.”

After CoStar published its earnings Tuesday, its stock price fluctuated in after hours trading, falling from a closing price of $99.74 per share to a low of just over $92. Later as Florance held a conference call with investors, the price began recovering and rose to $97 per share. 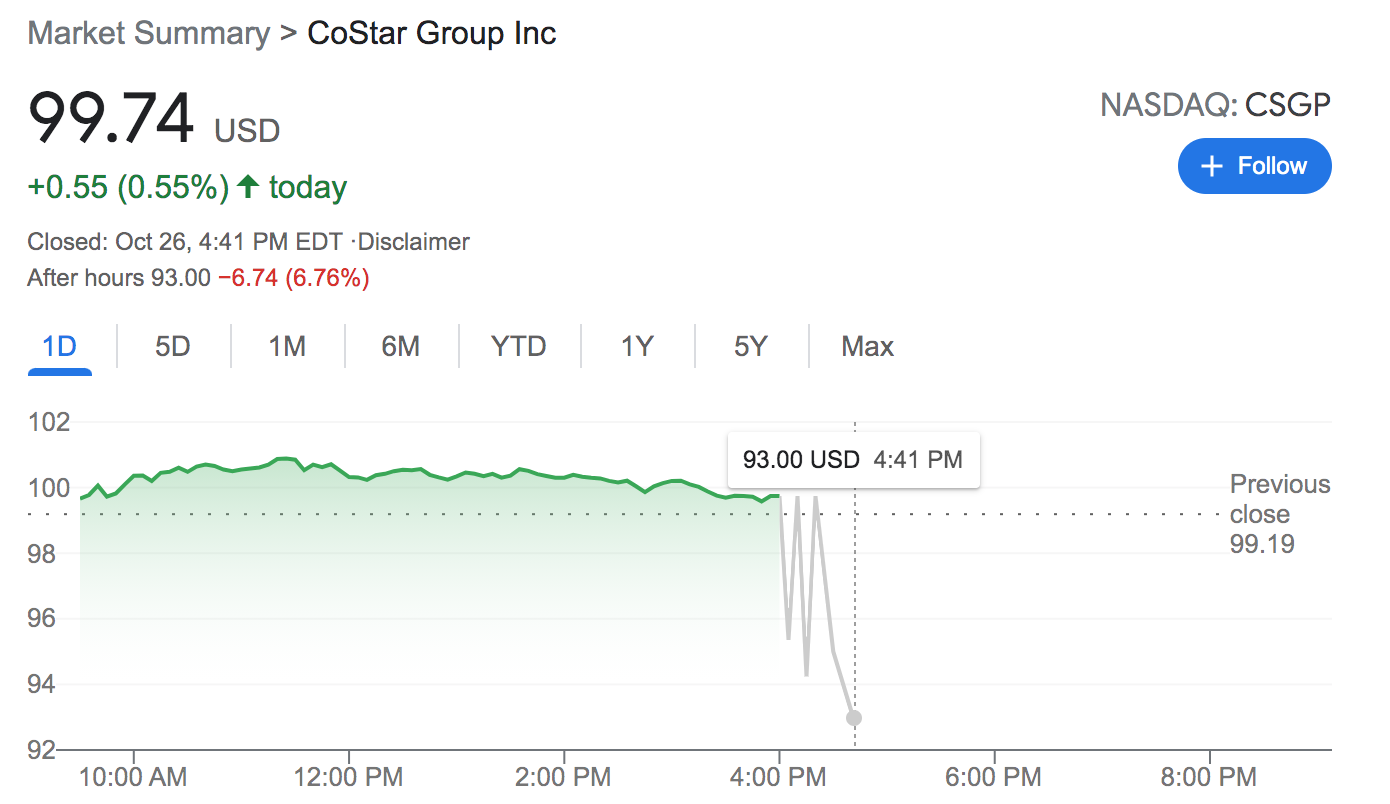 Tuesday’s earnings report also comes as CoStar increasingly edges its way onto the turf of other real estate giants. Most notably, the company is positioning itself as a challenger to Zillow; Costar announced earlier this month that it is working with the Real Estate Board of New York (REBNY) to launch Citysnap, a portal serving New York City. The portal will represent a competitor to Zillow, and to Zillow’s New York offering StreetEasy.

The portal announcement was just the latest development in a growing cold war between CoStar and Zillow that began when the former company acquired portal maker Homesnap last year. Florance has shied away from explicitly saying his firm and Zillow are rivals, though he has said real estate agents are Zillow’s competitors while also framing CoStar as an ally to agents.

Florance didn’t weigh in on the Zillow rivalry in the report, nor did the report mention Citysnap.

On the other hand, Florance did discuss the market, saying that in the rental sector there is “record levels of demand for apartments” and that “vacancies have declined to the lowest levels in decades creating some headwinds for demand in apartment advertising.”

“However, traffic to our network of sites increased 17 percent year-over-year in the third quarter of 2021,” Florance continued, “with Apartments.com generating millions more high-quality leads for our customers year-over-year in a low-vacancy environment while our clients are increasing their rents to record levels.”

During his call with investors Tuesday, Florance also described “sky high rents” that are good for owners and investors but which also contribute to a housing crisis. Florance also said he expects the situation to resolve within a few quarters, though for now the situation is “unprecedented” and “whipsawing or extremely volatile.”

“When you see it on a chart,” Florance added, “the slope of the curve is unprecedented.”

Update: This post was updated after publication with additional information from CoStar’s earnings report and from a call executives held with investors.