Hispanic and Black Americans who purchase lower-priced homes than white Americans can lead to further wealth gaps, according to a study by the National Association of Realtors.

Student debt holders and Hispanic and Black Americans purchase lower-priced homes than buyers without student debt and white Americans do, which can lead to further wealth gaps, according to a working paper released this week by the National Association of Realtors.

The paper, “Mind the Gap: Home Price Differences by Race and Student Debt,” was written by Dr. Jessica Lautz, NAR’s vice president of demographics and behavioral insights, and Dr. Michael White, Nottingham Trent University professor and director of the Centre of the Built Environment.

Lautz and White examined the purchase price differences among homebuyers from January 2014 to December 2017 who purchased a primary residence and how the purchase price can lead to further wealth gaps through equity in homeownership, NAR said in a press release.

The study used a survey sample of 18,771 respondents from NAR’s Profile of Home Buyers and Sellers and controlled for household income of the buyer, financial help from friends and family, home characteristics, region, and economic environment of the local area of purchase.

“Homeownership is one of the best ways to build wealth and purchasing homes that are significantly less expensive can lead to lost wealth accumulation — and possibly lost homeownership — across generations,” NAR said. 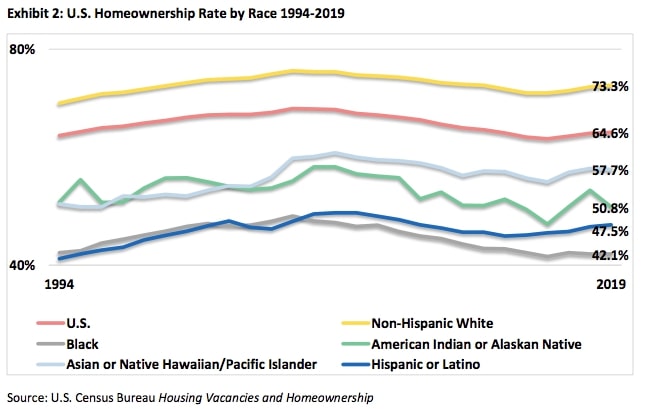 “In the U.S., the majority of Americans achieve their net worth through homeownership, which is a financial achievement many Hispanic/Latino and Black/African-American families have found unobtainable,” Lautz and White wrote.

Because Black and Latino homebuyers who do purchase homes are more likely to buy lower-priced homes, they will likely lose out on housing wealth accumulation, according to the paper.

“The lost wealth accumulation is likely to not just be a personal result, but also creates a cycle of lost wealth and even possibly lost homeownership among Hispanic/Latino and Black/African American families for further generations,” the paper said.

Lautz and white noted that previous researchers had found that homes in majority black neighborhoods have a valuation that is nearly $50,000 less than homes in other neighborhoods.

“Findings from this paper and others … suggest purchase price differences combined with neighborhood valuation will lead to further wealth divides in the U.S. between white and black/African-American households,” they wrote.

“Not only do they face the largest home purchase price differences, they do so in a housing landscape that is experiencing an affordability crisis with housing supply constraints,” they wrote.

“The housing shortage is most likely to impact entry level buyers who may be priced out of the home buying market, facing a need to move to a rural area with fewer job prospects, which limits the ability to pay off debt.

“If they enter the housing market, student debt holders purchase homes at a price point that may never catch up to their peers through wealth accumulation through housing.”

Lautz and White suggested a number of policy steps that could help close both the homeownership and wealth accumulation gap:

Which is the Best Option for You?