In the classic 1993 comedy Groundhog Day, Bill Murray’s character famously gets stuck in a time loop in Punxsutawney, Pennsylvania. At first, he’s confused. Later, he starts living it up. But for more or less the first half of the movie, each day seems to get a little bit worse than the one before it. Over time, the character resorts to suicide again and again.

Fans have debated how long Murray’s character is stuck in the loop — a popular estimate seems to be 33 years — but eventually something novel starts happening: Each day becomes an improvement over the last. Eventually he manages to positively touch the lives of seemingly everyone in town, and he gets out of the loop.

The movie is an apt metaphor for what’s happening in the housing market right now. Everyday is weird, confusing and — when it comes to inventory in many places — potentially worse than the one before it. And as in Groundhog Day, change comes slowly.

This week, Inman spoke with agents and economists about what’s going on with prices, inventory and the future of housing. The takeaway from these conversations is that the market is probably not poised to collapse the way it did in 2008. But there are still challenges ahead.

Below, Inman has gathered a collection of statistics that help shed light on what’s going on. There’s good news and bad, but let’s get the bad out of the way first:

Data from the National Association of Realtors shows that as of April of this year, there were 1,484,549 Realtors in the U.S. That’s higher than any other month in NAR’s data, which goes all the way back to 1910.

So why is this a potentially troubling number?

While of course it’s good to have an inclusive industry, the surge in Realtor ranks comes at a time when inventory is extremely low and agents are having to work extra hard to close transactions.

Put another way, you can think of the number of Realtors in terms of supply: Right now there’s more supply of agents than ever before, but the supply of homes is low, meaning there’s less work for all those agents.

The proverbial pie is potentially being cut into more pieces, and whenever a labor pool gets bigger that exerts downward pressure on earnings.

Additionally, NAR’s data also shows agent ranks surging in the lead up to the last bubble. 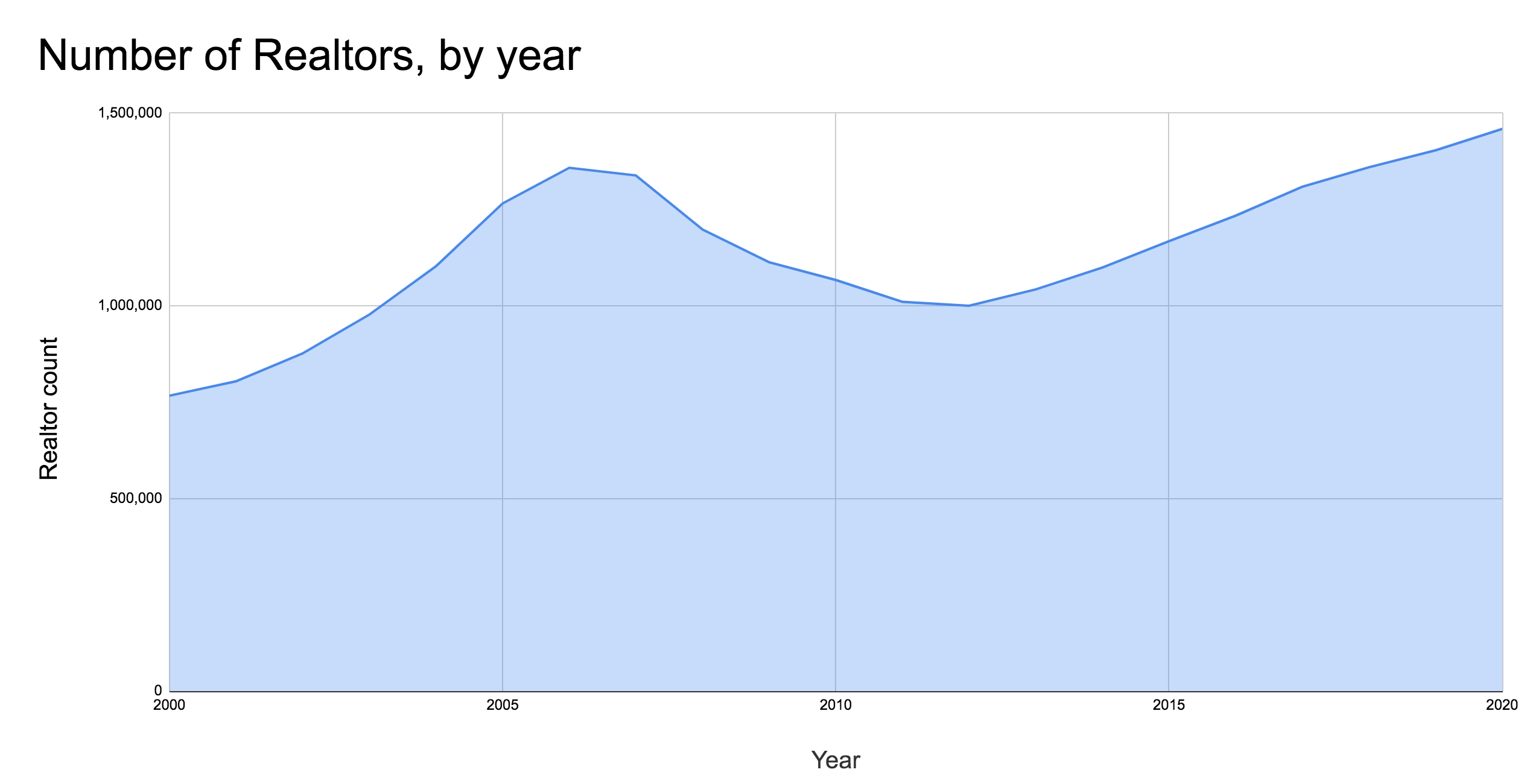 Looking at that graph, it’s clear that today’s numbers are following a similar trajectory to those in 2005 and 2006 — right before the last crash. That doesn’t necessarily mean the market is headed for a crash right now. There are other ebbs and flows in the data going further back, and correlation doesn’t mean causation. In other words, more agents don’t cause a collapse.

Still, at the very least, these numbers mean there’s more competition out there. And the fact that there are any similarities at all between today and the pre-bubble days of yesteryear might be enough to give some industry members jitters.

Inman has covered the rising cost of lumber in some detail at this point, but the most recent numbers indicate that those costs have now tacked an additional $35,872 onto the price of a new home. The National Association of Homebuilders (NAHB) additionally estimates that as of April 2021, lumber prices have jumped 250 percent year-over-year. 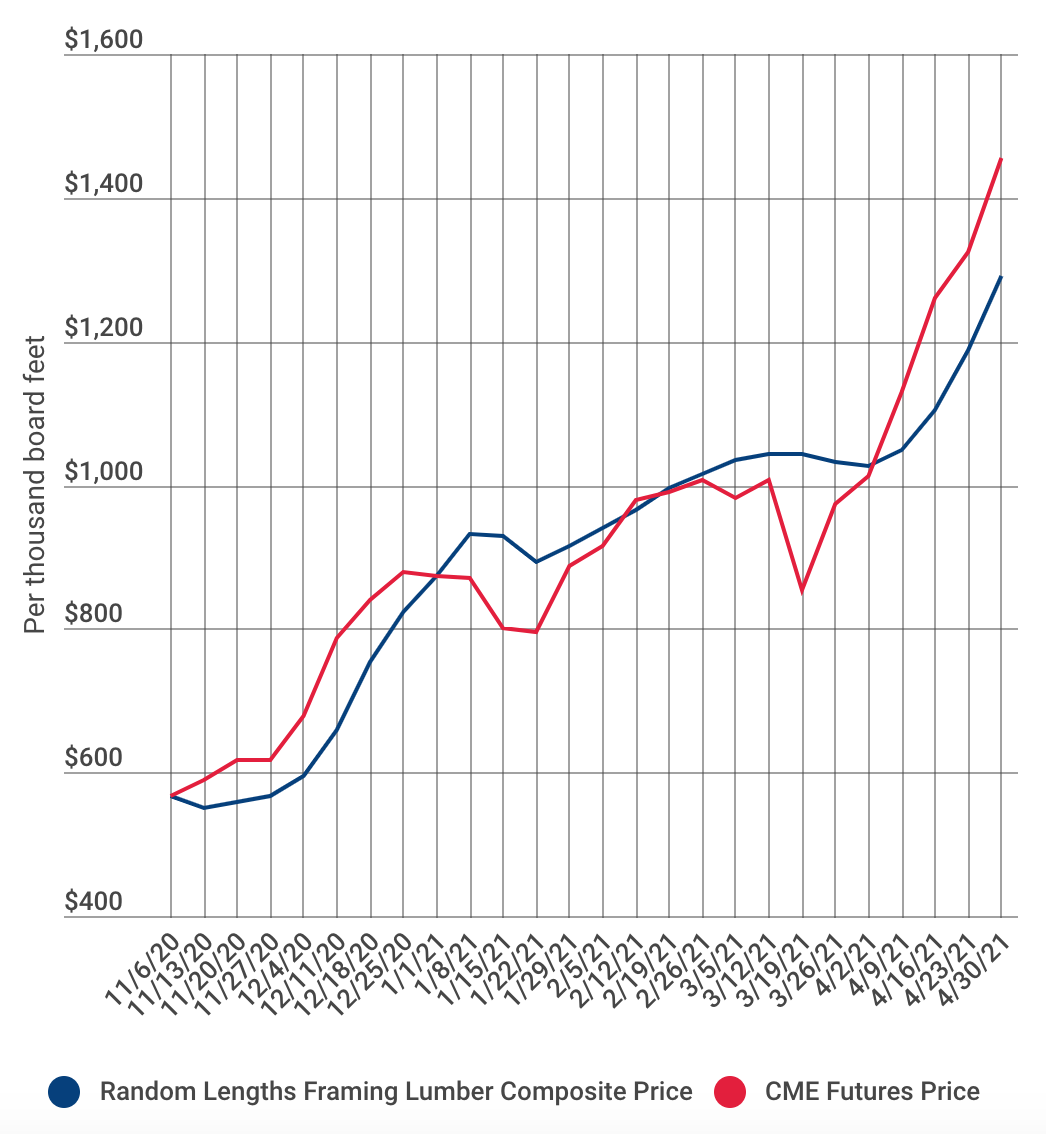 The problem in the lumber market is two-fold: First, as the pandemic began lumber manufacturers gambled that demand would go down amid an economic slump, and they consequently curtailed production. However, it turned out that they were wrong. Demand actually went up.

As a result, demand was higher than ever at precisely the moment when supply was lower than ever. It was a recipe for soaring prices.

The NAHB has argued that the resulting situation threatens “housing affordability for all Americans.”

In addition to rising material costs, one of the ongoing problems when it comes to housing supply is a persistent labor shortage. This shortage predates the pandemic, and economists recently told Inman that beginning after the last housing bubble many workers left the construction industry — and in some cases the country.

Data from the U.S. Bureau of Labor Statistics shows that as of March 2021 there were about 7.5 million projected workers in the construction industry.

The good news is that today’s number represents an increase compared to the last several months. And the overall trend is definitely going in the right direction if the goal is to build more housing.

But the bad news is that today’s numbers are still lower than the numbers in 2020 and 2019 — when the labor shortage was also acute.

The long term implication of this trend may be greater than the short term shocks of rising lumber prices. While lumber manufacturers will eventually be able to ramp up production, a very long-term labor shortage will ensure that it remains harder and slower to add new housing supply.

A more competitive labor market also means higher wages, which is great for the workers themselves but also translates into higher costs for the people buying the new houses.

Agents who expect pent up demand to be satisfied soon: 10 percent

In February and March, referral platform HomeLight conducted a survey of more than 1,300 real estate agents. The survey gauged agents’ take on the market, and ultimately found that just 10 percent thought today’s extraordinary amounts of demand would be satisfied “soon.” In addition, 91 percent of survey respondents said inventory this spring was lower than they expected. A year ago, only 73 percent of agents said the same thing.

Other findings in the survey include that 69 percent of respondents said sellers are bailing on the market and not listing their homes; 24 percent “worried that homeownership is becoming more of an ‘exclusive club’ as some buyers get priced out”; and 94 percent said the inventory shortage in their market is getting worse.

Every local market is different, and individual agents may not have access to deep economic data that could theoretically lead to marked improvements down the road. But these numbers are nevertheless a good barometer for sentiments in the industry. And they make it fairly clear that many agents see an industry where challenges are getting worse.

These crazy times really kicked off last year with the start of the coronavirus pandemic, so it’s only fitting that the rollout of the vaccine would herald a return to something like normalcy.

And according to the U.S. Centers for Disease Control (CDC), that rollout is going fairly well: Numbers as of May 3 indicated that 105.5 million Americans, or 31.8 percent of the country, are fully vaccinated.

The implications for real estate from these numbers are significant. With the outbreak receding, for example, standard practices such as open houses and in-person showings could theoretically become ubiquitous again. Would-be sellers who were afraid of letting people inside their houses might finally opt to list their homes.

HomeLight’s survey, for example, revealed that 26 percent of agents felt vaccines would be the “first lever” for increasing inventory and easing the supply shortage.

Additionally, 31 percent of survey respondents indicated the best way to solve the current inventory squeeze in the market is to achieve herd immunity.

The government numbers also show a steady increase in construction spending over the last quarter and a half. 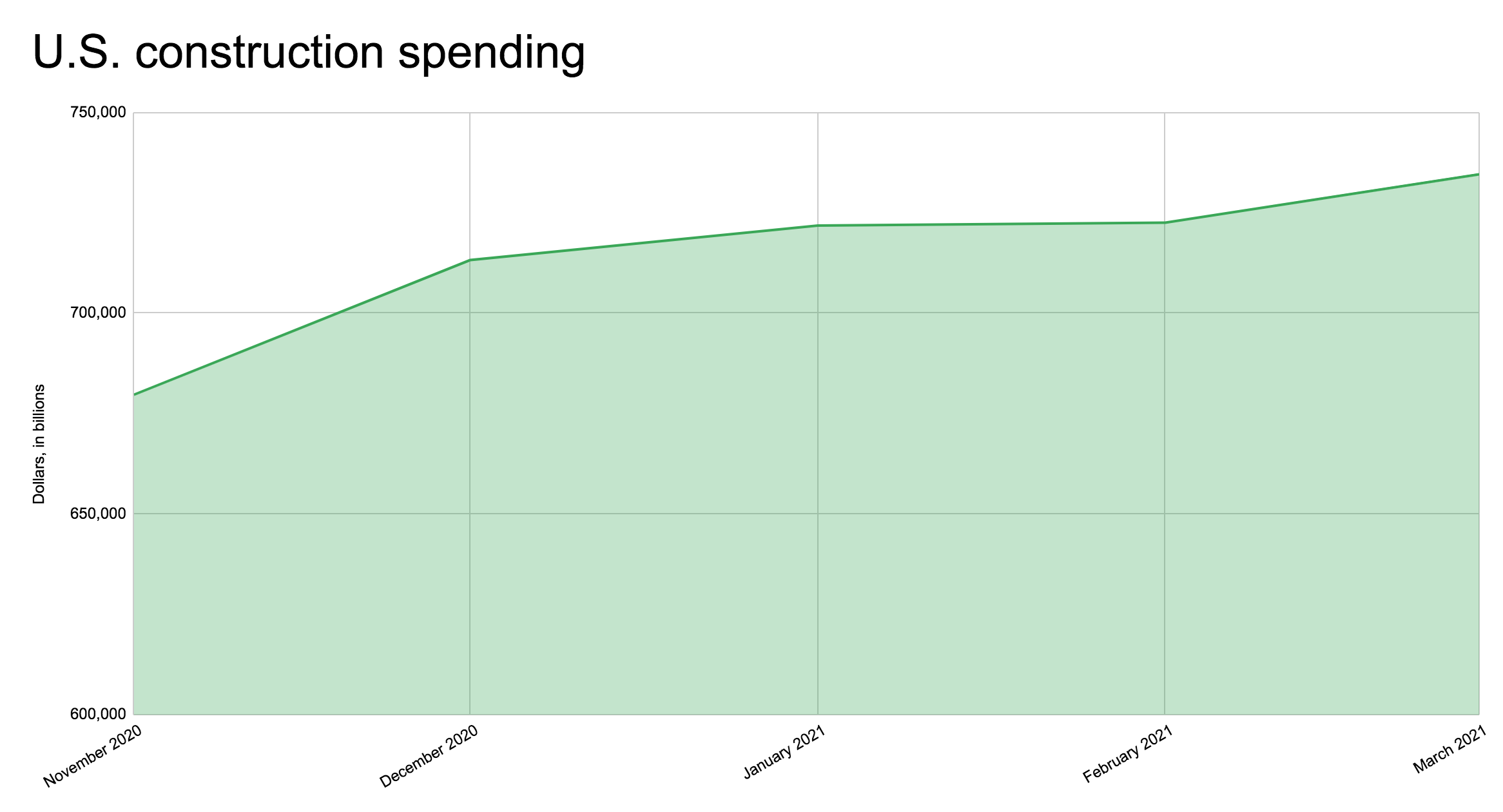 Overall, these numbers suggest that builders are responding to increased demand for housing and are building both single-family residences as well as denser apartment and condo residences.

These numbers also suggest that soaring material costs (which account for some of the rising spending) aren’t turning builders away from the sector.

Lawrence Yun, NAR’s chief economist, is also relatively bullish on construction. In a recent market report, which NAR provided to Inman, Yun said that “more inventory will show up as new home construction intensifies in the coming months.”

The increase in inventory won’t show up immediately, but Yun did say it would be “a step forward.”

While the broad outlines of the current inventory shortage are generally understood — there’s more demand for housing than there is supply — a number of lesser-understood factors are also making the situation more extreme. One of those factors, according to economists, is institutional investment. In other words, landlords, flippers, startups and other entities come in and outcompete buyers for houses.

However, a February survey of more than 200 rehab-and-resell buyers from Auction.com “found that rehabbing and reselling to owner-occupants was the primary investing strategy for the majority” of respondents.

The report additionally reveals that the vast majority of investment buyers, or 78 percent, purchased properties within driving distance of their own homes. Moreover, 87 percent purchased five or fewer properties in 2020 — which was up from 76 percent in 2019. Only 3 percent of survey respondents purchased more than 10 properties. 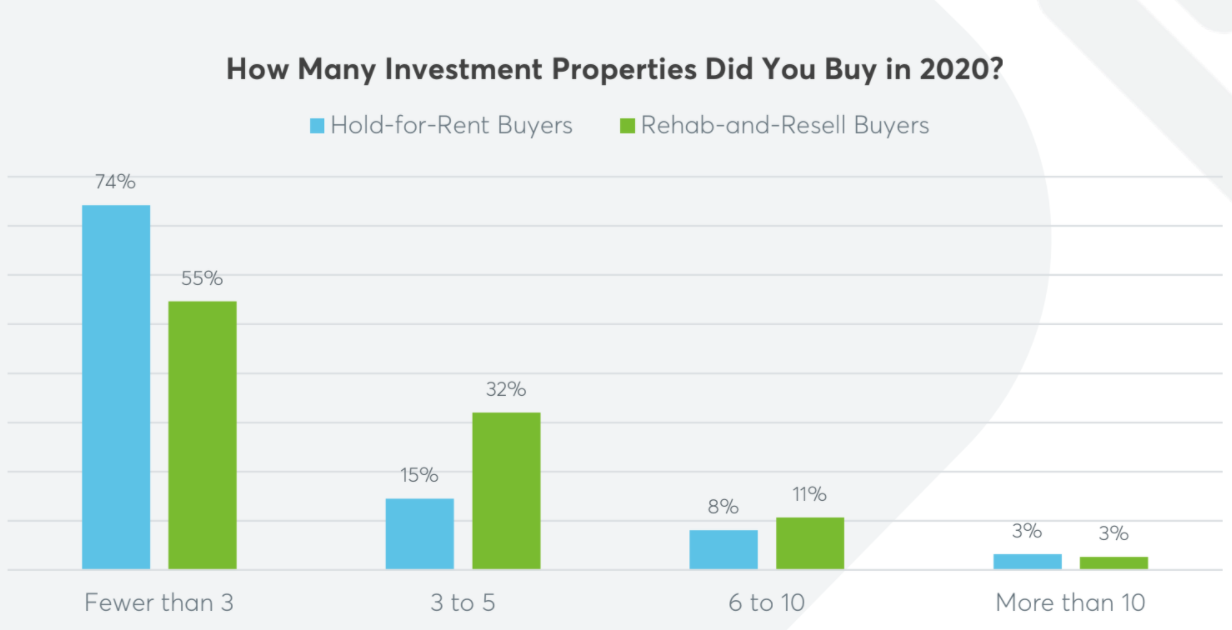 The implication from these numbers is that despite a massive influx of venture capital in recent years, as well as the rise of professional iBuying startups such as Opendoor, a significant amount of institutional investment is still taking place at the local, mom-and-pop level.

At the end of the day, real estate comes down to sales, and projections from NAR indicate that despite all the challenges, 2021 should hit a high point: 6.22 million existing home sales. That would be 10.3 percent higher than 2020, when about 5.6 million homes sold.

During an earnings call with investors Tuesday, Zillow CEO Rich Barton said that inventory is very low right now, but he also offered a metaphor for what’s going on: The market is like the emergency air bag on an airplane, and flight attendants always point out that “even if the bag doesn’t inflate, air is flowing.”

The point was that something similar is going on right now in real estate. Homes are flying off the market and prices are rising, but the “air” — or in this case transactions — are flowing. The market is still alive.

That doesn’t mean times will be easy in the near future, but it should offer some hope for agents who are watching prices rise more and more every day.