In November, 16.4 percent of renters sought out apartments with short-term leases outside of their current metro area, an increase of 40 percent since January, according to Apartment List.

With uncertainty high, more renters are seeking out short-term leases to allow flexibility while deciding how and where to live amid the coronavirus pandemic, according to Apartment List’s fourth quarter renter migration report.

A whopping 10.7 percent of renters who searched Apartment List for a rental in their own metro in November were looking for a short-term lease of six months or less compared to 7.9 percent who made the same search in January.

Between July and November, 28.9 percent of renters searched for an apartment outside of where they lived, which was only up from 27.5 percent during the same period the year before. Therefore, there hasn’t been a huge increase in demand in out-of-metro searches on the whole, but renters seem to be more tenuous about making permanent moves.

As renters have considered where they want to stick it out during quarantine, Honolulu has emerged as a the hottest market for individuals seeking out rentals with short-term leases. Searches for short-term rentals in the area increased from 14.9 percent in July 2019 to 26.8 percent in July 2020. Still, Honolulu has become more popular overall among renters across the U.S. during the pandemic too — 42.2 percent of renters living in a different metro area searched for an apartment in Honolulu during the third quarter compared to 30.4 percent during the same period in 2019.

Other cities experiencing an influx of renters outside of their metro for short-term leases include more modestly sized cities with access to nature: Boulder, Colorado; Charleston, South Carolina; Savannah, Georgia; and Portland, Maine.

Although recent reports have noted that people are leaving expensive coastal cities for more affordable alternatives with work-from-home options plentiful, Apartment List’s short-term lease data suggests that a fair share of those individuals may only be relocating temporarily. For instance, 22.1 percent of renters living in San Francisco searched for a short-term lease during the third quarter, compared to 12.6 percent during the same period in 2019. Similarly, 17.9 percent of renters living in New York searched for apartments outside of the metro with a short-term lease in recent months, compared to 9.6 percent during the same time last year. 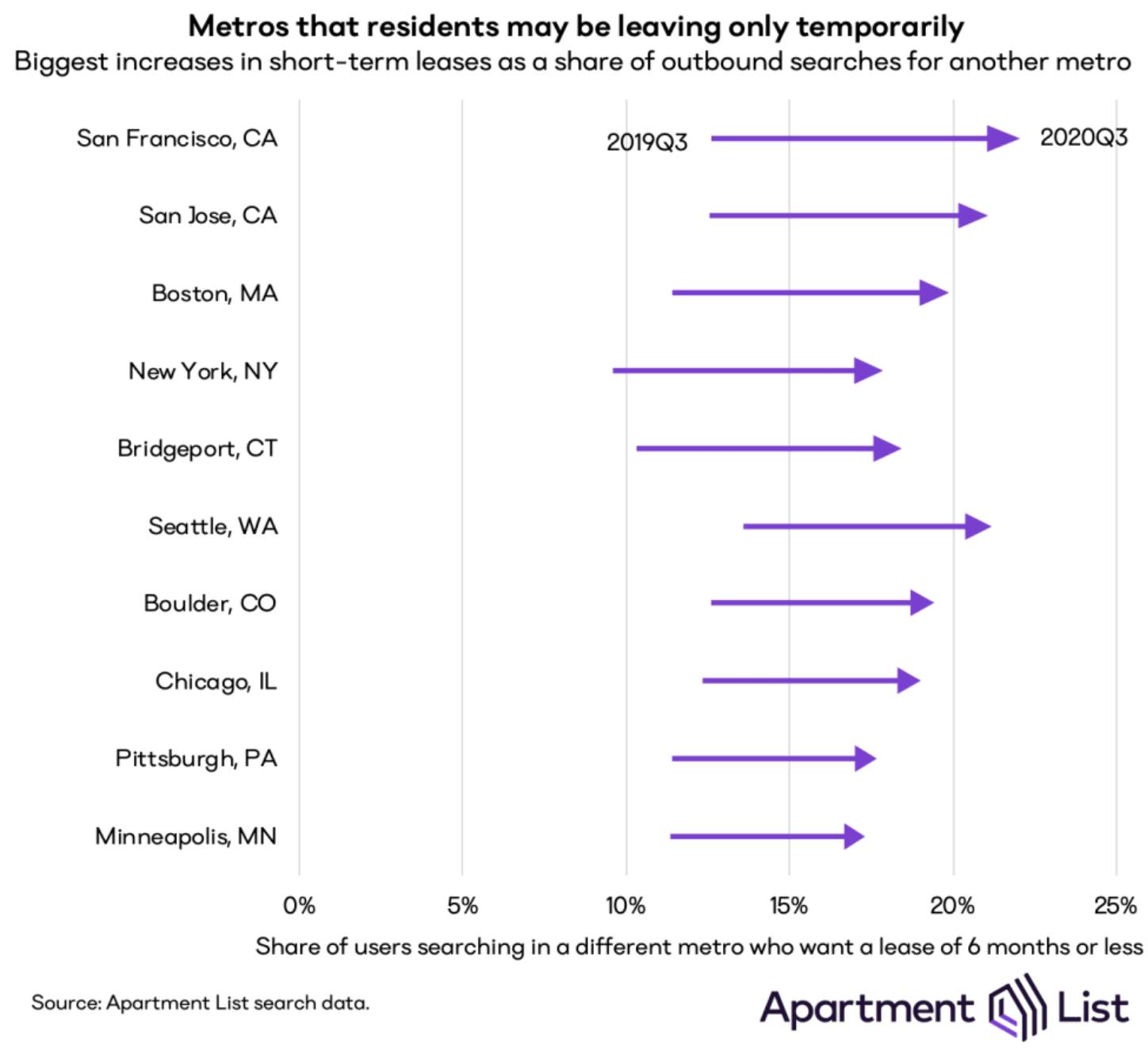 However, the overall change in migration patterns across these more expensive coastal metros on an annual basis hasn’t been so drastic — again, looking at San Francisco, between July and November of 2020, 30.7 percent of renters were searching for a place to live outside of the metro, up slightly from 29.6 percent during the same period in 2019.

“While some have predicted that the pandemic could represent a death knell for cities, the spike in demand for short-term leases among those leaving these cities would seem to imply that residents may return once the pandemic has passed,” Apartment List’s report reads.

Therefore, while working remotely remains the norm, it seems that renters are willing to temporarily try out a new city. But once that changes, and vaccine use becomes more widespread enabling fewer restrictions in cities, renters may be ready for their pre-pandemic city life once again.