This is the second installment in Inman’s “12 in ’21” hot neighborhoods series, which explores areas with both booming real estate markets and dense amenities. To read the first story in the series, click here.

Even before the pandemic, Boise was landing headlines. But over the last year, focus on the Idaho capital — with a population just over 226,000 — has only intensified. It’s shown up in the pages of the New York Times, perennially topped best-of lists and earned recognition for its strong economy.

All of Boise is booming right now, and certainly part of the appeal is that the city has numerous big homes on big lots. But lying in the heart of the city, just a stone’s throw from downtown, one neighborhood in particular stands out: the North End.

The North End is an older area. It’s walkable. It’s eclectic. By all accounts, it’s fun. In a hot city, it has the amenities and lifestyle perks to be cool. Here’s why that is, and what you need to know about it:

What is the North End?

When Inman reached out to agents in Boise and asked about the coolest neighborhoods with the most amenities, they uniformly pointed to the North End.

The neighborhood sits just a few blocks north of downtown, as well as immediately south of a network of foothills. Andrea Pettitt, who runs the Pettitt Group within Group One Sotheby’s International Realty, told Inman the hills are crisscrossed with a “massive trail system” that is one of the biggest draws of the area.

And with hiking and other outdoor activities literally just blocks away, it’s no wonder the North End, according to Pettitt, has a vibe that is “super crunchy” — a reference to the popularity of granola among the outdoor adventure set.

The North End is one of the oldest parts of Boise, and over its more than a century of history experienced both growth and decline. In some cases, grand older homes have been split into apartments, diversifying the area’s housing stock, and by the 1980s areas within the neighborhood had received various historic designations. 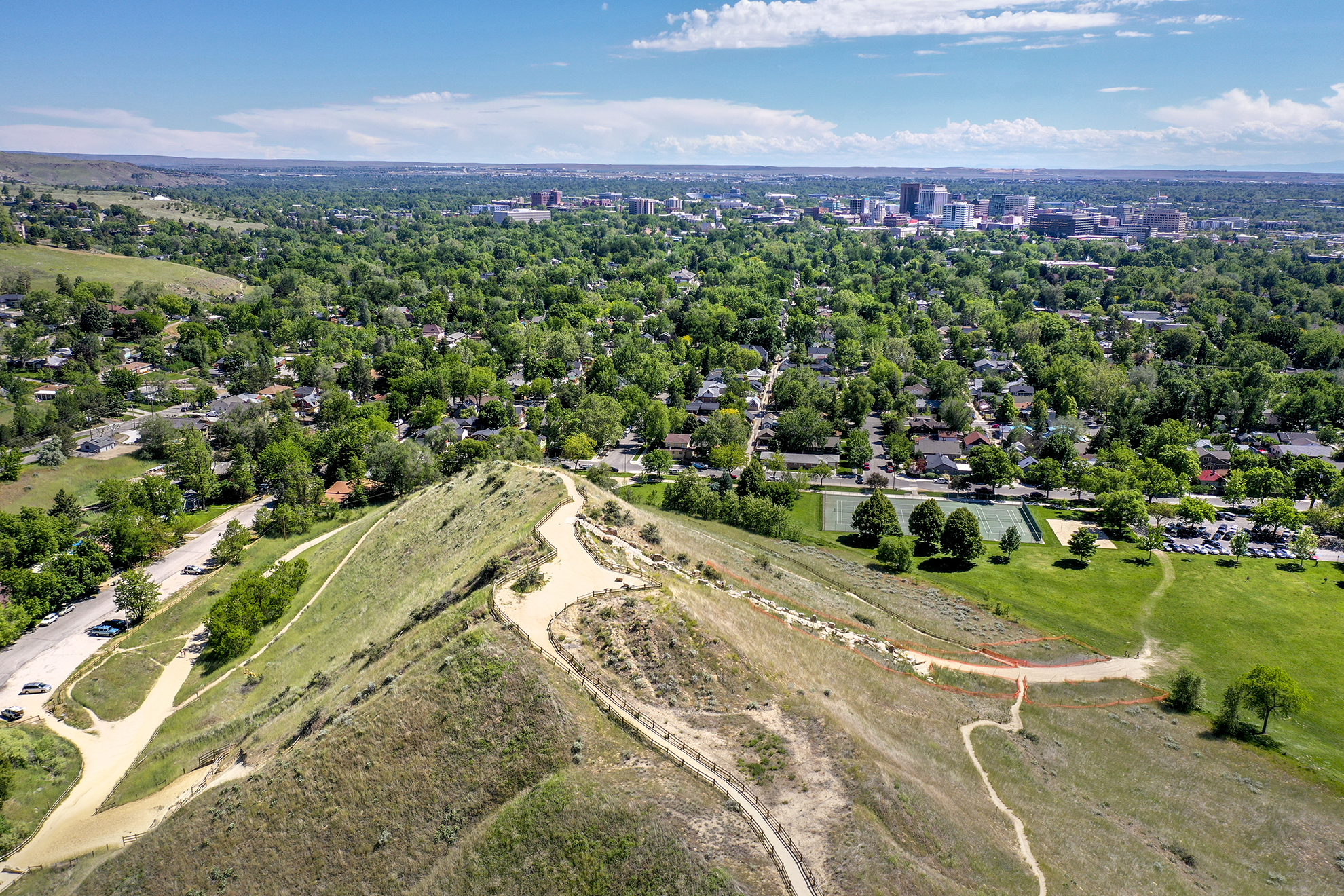 The North End, as seen from the top of the nearby hills, which are crisscrossed by hiking trails. Credit: Tony Moody, via Andrea Pettitt

Sponsored Content“Real estate markets across the country are incredibly hot right now, but one that is unexpectedly boiling is Boise, Idaho. We see in areas like Boise that a Verified Approval from Rocket Mortgage – which helps homebuyers compete with cash offers because all income and assets are already reviewed – can play a huge role in helping homebuyers secure the home of their dreams.”— Bill Banfield, Executive Vice President of Capital Markets, Rocket Mortgage

City data further shows that the median income in the North End was $52,321 in 2019, which was just slightly lower than the median in all of Boise. 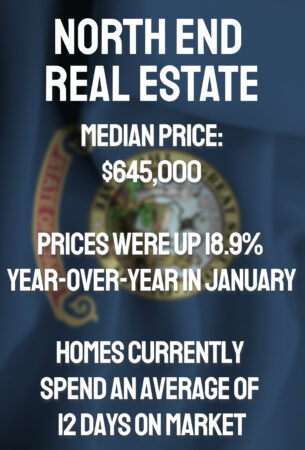 As one of the oldest areas in Boise, the North End includes an eclectic mix of older homes in various styles. Those homes are in high demand. As of mid March, a search of listings on Zillow showed that there were only eight homes for sale in the neighborhood. The most expensive, a 4,770 square-foot modern home in the hills, was asking $2.19 million. The least expensive property was a 1,235 square-foot home listed for about $430,000.

Data that Zillow provided to Inman shows that home prices in the area have also shot up over the years. Back in January of 2015, the “typical” price of a home in the 83702 zip code — which includes the North End as well as surrounding neighborhoods — was $321,284. (Zillow uses its own adjusted measure of home values, dubbed the Zillow Home Value Index, to come up with typical prices, rather than the more commonly used median prices.)

However, by January of this year, the median price had nearly doubled, to $637,887. Prices saw particularly explosive growth during the pandemic; in January, they were up 24.1 percent year over year. By contrast, in January 2020 prices were only up 7.2 percent compared to one year earlier.

“Inventory in the North End area began to feel the squeeze in the months before the pandemic hit, then started to pick back up in the spring while much of the country’s housing market activity was on pause,” she added. 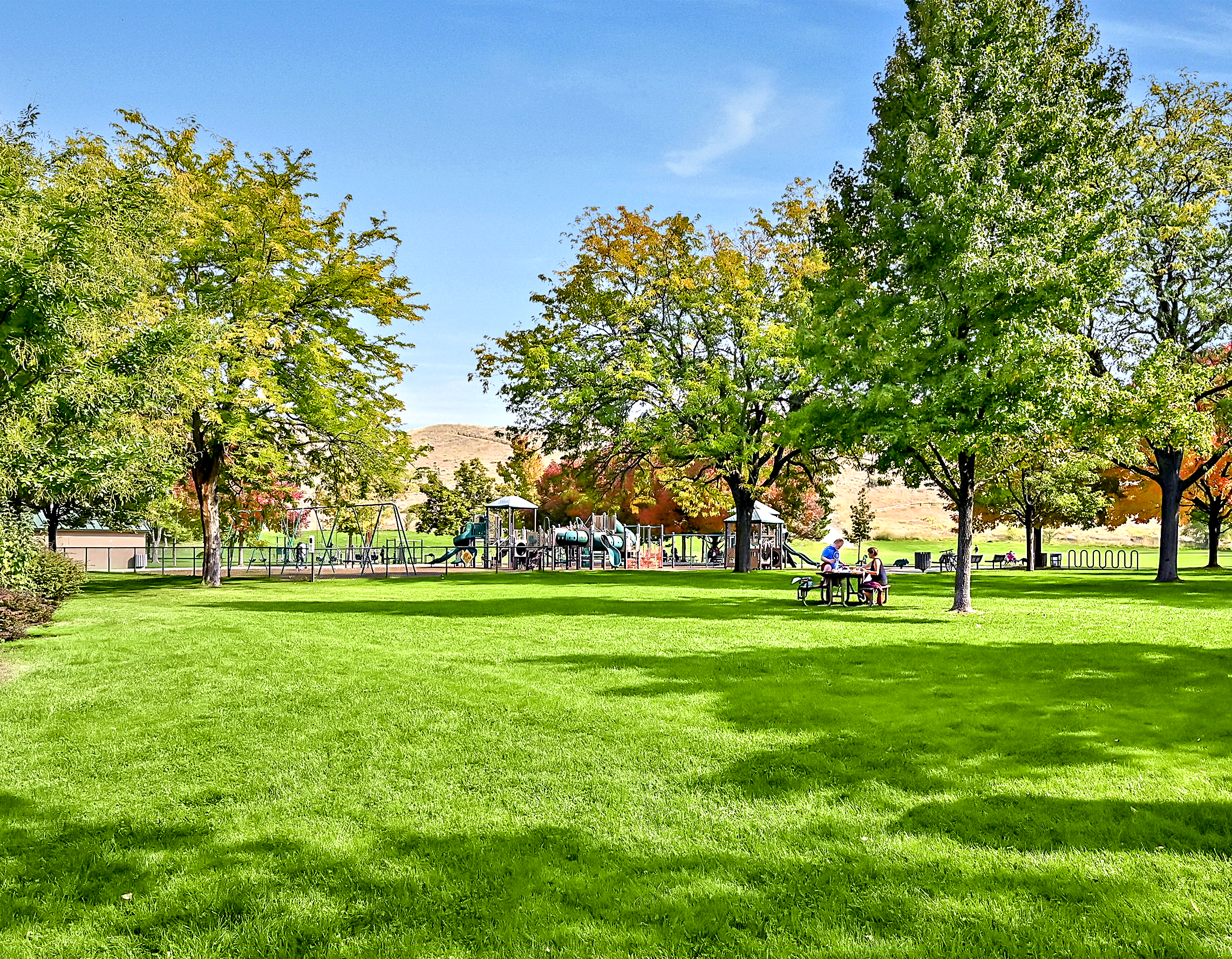 A popular park in the North End. Credit: Tony Moody, via Andrea Pettitt

Data that Redfin provided to Inman further paints a picture of tight inventory and rising prices. The Redfin data specifically zeros in on the neighborhood, rather than the zip code, and shows a median price of $645,000 in January 2021, up 18.9 percent year-over-year.

The Redfin data further shows that 39 homes sold in the North End in January, with another 55 having sold in December 2020. There were 15 new listings in January, which was down more than 11 percent year over year. Homes spent an average of 12 days on the market in January, and on average sold for 101.5 percent of their asking prices. 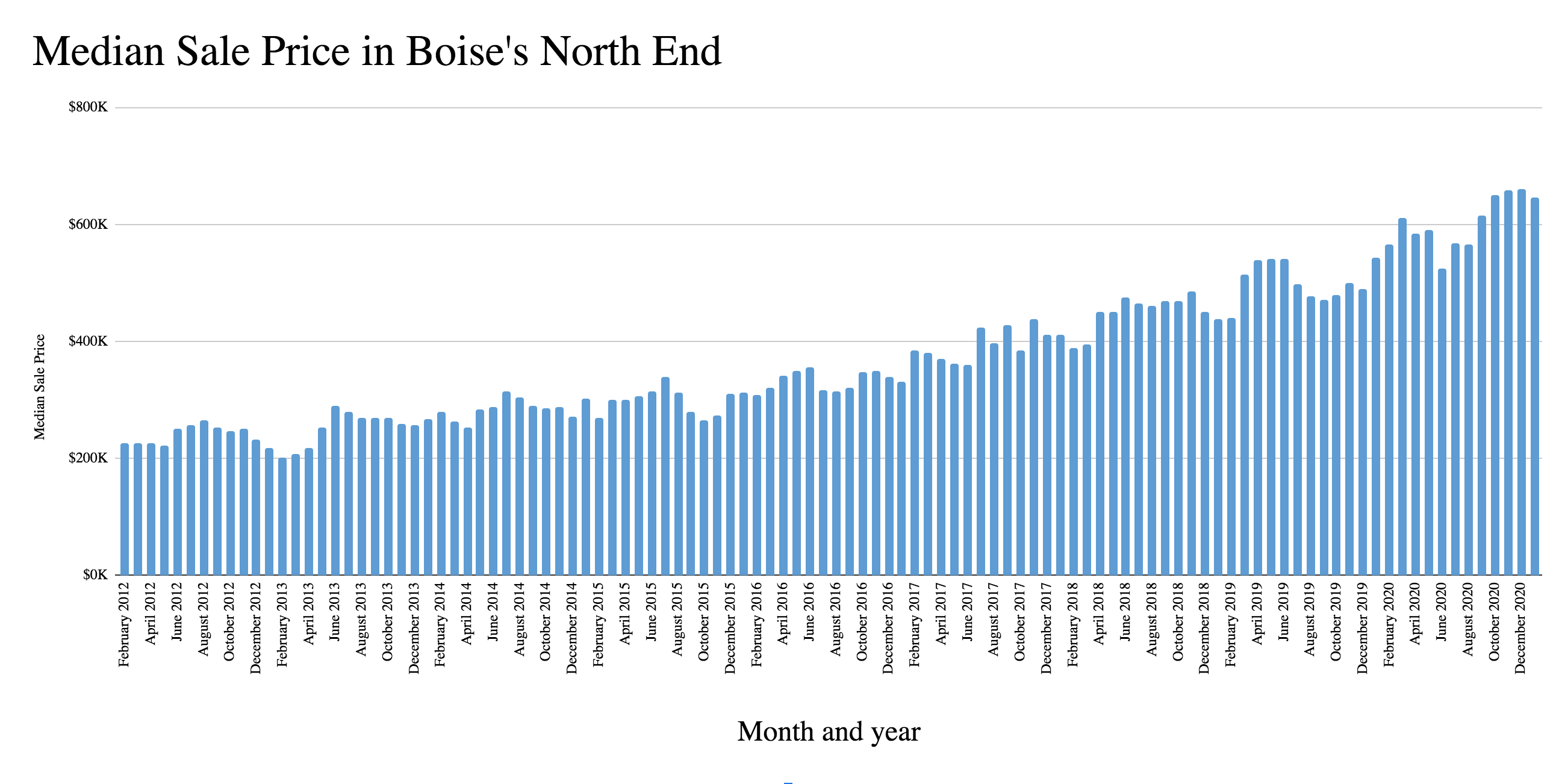 These numbers obviously paint a picture of a hot housing market in the North End, with buyers quickly snapping up the few homes that hit the market. Agents who spoke with Inman indicated their personal experience on the ground confirmed those conditions.

“The North End has always been one of the most in-demand places to live,” Steven Caporale, a founder at Accel Realty Partners, told Inman. “You put a home on the market, and it might get between 10 and 12 offers. That’s not hyperbole — that really is what the situation is like.”

Alei Merrill, a senior partner at Accel, added that “the inventory in that particular market is so limited it’s hard to get any of those homes.”

Pettitt described the North End as the “granddaddy neighborhood” of Boise and agreed that its mix of “charming craftsman homes” and amenities have made it consistently popular. And she said homes in the area that just a few years ago might have sold in the $400,000 range are now asking more than $900,000. Asked if it’d be possible to find anything at all in the area for half a million, she speculated that someone might be able to find a “two-bed, one-bath just outside of the North End, but even that’s tricky.” 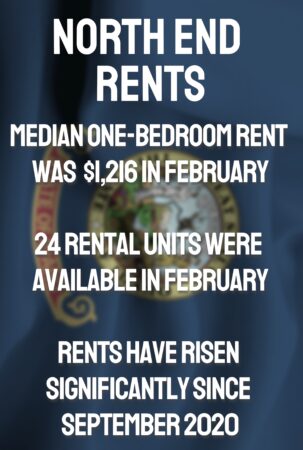 Much as has been the case with home prices, rents in the North End area have steadily gone up as well in recent years. Zillow’s data shows that back in 2014, the typical rent for the 83702 zip code was just $848 per month. By January of this year, however, that number had risen to $1,389.

January rents were up 9.7 percent year-over-year. And rents in the area have consistently seen increases of 6 percent or more since September 2020.

Rental company Zumper also provided Inman with rental data, which shows that the median rent for a one-bedroom unit in the 83702 zip code was about $1,216 in February. That’s up from about $950 last February.

Zumper further reported 24 available rental listings in both January and February of this year, down from 40 and 25 during the same periods last year.

That’s a lot of numbers, but the takeaway here is that rents are rising and listings are few and far between. And that, along with the sales data, suggests the North End is popular among people in different stages of life and at different income levels. 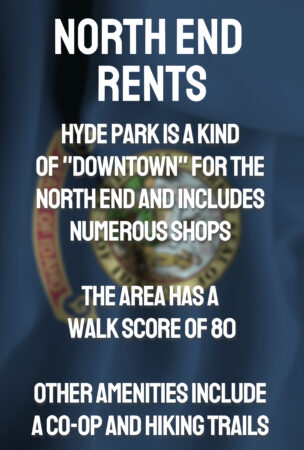 While home sales and rental data show that the North End is hot, it’s really the amenities that set it apart from other areas in the region. The agents who spoke with Inman for this story all specifically pointed to Hyde Park as one of the area’s biggest selling points. Sitting on Boise’s 13th Street, Hyde Park is a small commercial district buried in the heart of the North End. It’s filled with restaurants, a soda fountain, coffee shops and boutiques and functions as a kind of mini “downtown” for the area.

Pettitt also said the area is home to the Boise Co-op North End, which when she was a kid was a single room with a wooden floor but today has grown into something akin to “a huge grocery store.”

“It’s kind of a local treasure,” she said.

Pettitt, along with Caporale and Merrill, said that there are many popular neighborhoods in Boise right now, and home prices have been going up across the board. But they also explained that many of the city’s neighborhoods are decidedly more suburban in character, with homes and businesses typically separated into their own zones.

As a result, things like the Hyde Park shops and the local co-op make the North End especially unique in Boise. 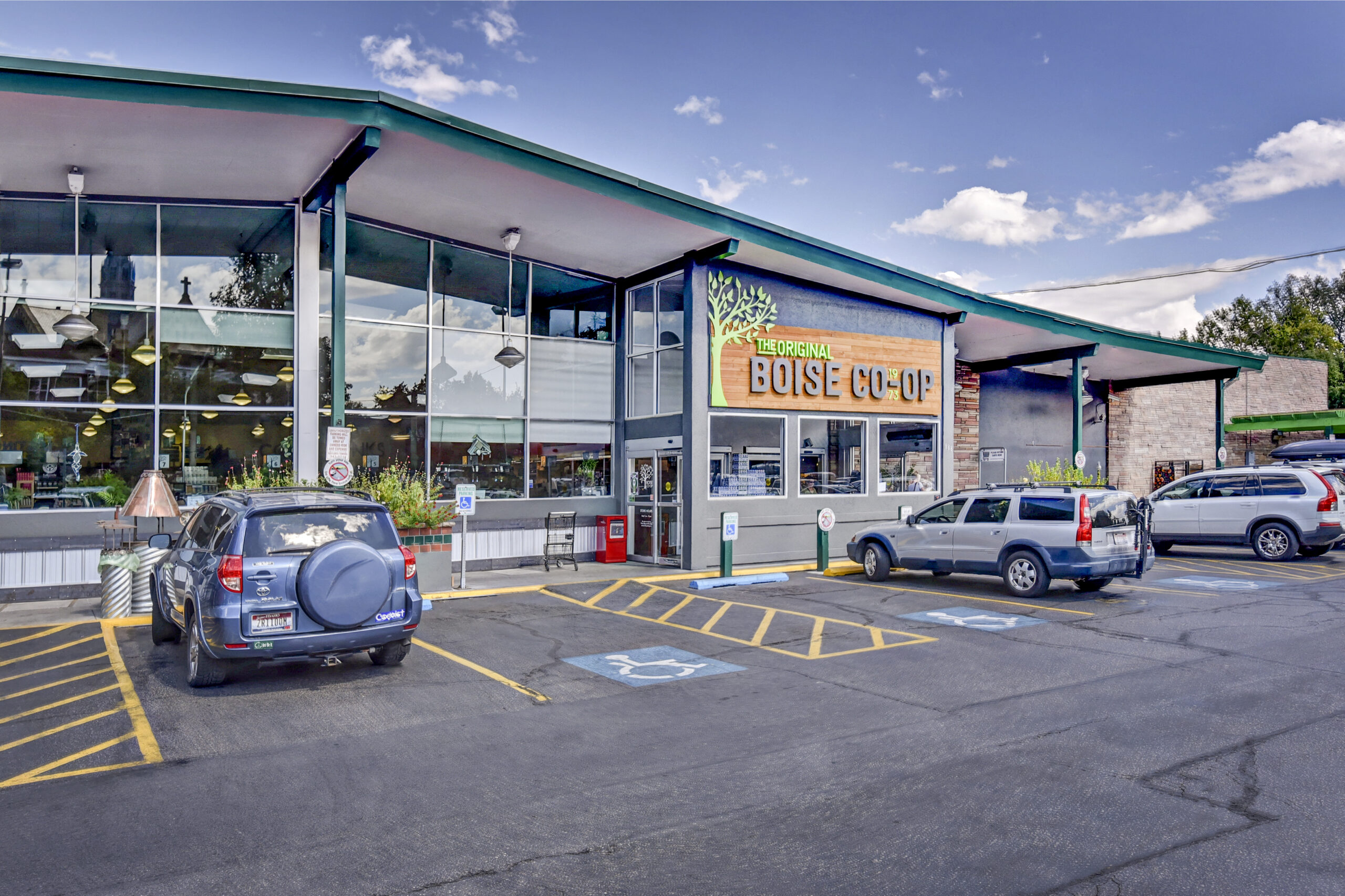 The North End’s co-op is one of the area’s more popular amenities. Credit: Tony Moody, via Andrea Pettitt

Those amenities also make the neighborhood more walkable than many parts of Boise. According to walkability ranking website Walk Score, the North End is “very walkable.” The area specifically has a Walk Score of 80 out of 100, meaning people can do most errands on foot, as well as a bike score of 87, meaning it’s very easy to get around on bike.

By contrast, Boise itself has an overall Walk Score of just 39, meaning that the city generally is car-dependent. 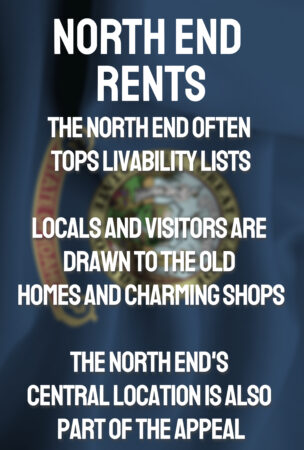 With so much going for it, it’s no surprise that the North End routinely ends up getting positive attention. In early March, for example, the Idaho Statesman noted that developers are moving forward with housing projects on the areas edges.

The North End is also routinely listed at the top of the city’s best neighborhoods. For instance in October, a blog post from Keller Williams Realty Boise highlighted its “postcard-picturesque bungalows and central location.” In 2019, Business Insider dubbed it one of the most popular neighborhoods in the ascendent city. And a Quora question about the best areas in Boise elicited numerous answers pointing to the North End.

“My favorite would be the North End where most of my friends live,” one response explained. “I don’t see the point of living in a city unless you are close to the downtown. The North End is beautiful, [has] great old homes and many good quality new ones. It is a great place to walk and close to good running trails.”

How Strategic Partnerships Can Help Your Brokerage Stand Out