Ten years ago, the sketch comedy “Portlandia” debuted with a conversation about cities and coolness. Though most of the show was set, obviously, in Oregon, the opening scene takes place in Los Angeles, as two characters talk about how Portland is a place where the dream of the 1990s is still alive. The sketch ends with both characters relocating to their new urban oasis where “young people go to retire.”

The scene was a joke and a parody. But it also speaks to a deeper truth about the way hot cities and hot neighborhoods bubble up in the collective consciousness, almost overnight. Initially via word of mouth, places like Portland get some buzz and start attracting new residents. They earn a reputation and see their real estate values soar. Eventually, they become the subject of clueless, over-the-top New York Times style pieces.

The quintessential example is Williamsburg, the Brooklyn neighborhood that was once a working class enclave but since the late 1990s has gradually evolved into the epicenter of hipsterdom in America. The Los Angeles equivalent is Silver Lake, once a bastion of affordability that is now filled with multimillion dollar homes and eateries that serve green juice and vegan dog snacks.

These changes can sometimes be painful and involve controversial gentrification. But regardless of how they play out, they’re useful to understand if you’re in the real estate business because they shape migration patterns and property values.

To that end, this is the inaugural post in Inman’s “12 in 2021” neighborhood series. The series will look at a dozen neighborhoods across the U.S. that, like Portland and Williamsburg before it, seem to be disproportionately attracting attention. Obviously this is subjective — we don’t have a crystal ball to predict what will actually be the next Williamsburg — and there are more potential candidates than we have the ability to cover. However, in an effort to bring some order to the chaos, we’ll focus on things like home prices, rents, amenities, and buzz.

First up, we’re looking at Bouldin Creek in Austin, Texas. Why Austin? For starters, two different reports recently indicated Austin is poised to be the hottest market of 2021. More anecdotally, we’ve also been hearing about Texas’ capital city for years. It’s growing, it’s cheaper than the coasts, and — key for this series — it has a reputation as an exciting place.

What is Bouldin Creek?

Bouldin Creek sits just across the Colorado River from downtown Austin and is located entirely within the 78704 zip code. It’s immediately southeast of the Zilker neighborhood, and northwest of Travis Heights, both of which are areas that also fall within the same zip code. Those three neighborhoods and the surrounding areas are in some cases grouped together in the data presented in this post.

According to data from Austin’s city government, the population of the 78704 zip code was just over 47,000 as of 2017. Unfortunately more recent official local government data isn’t available, but between 2010 and 2019 Austin’s overall population increased by more than 22 percent — far more than the 6 percent increase in the U.S. generally. So its probably safe to say the neighborhood population has ticked up as well. 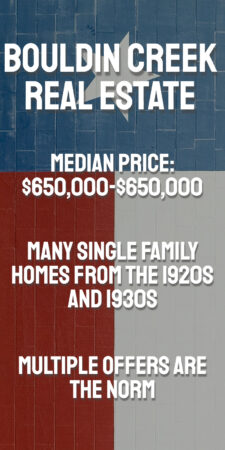 Bouldin Creek includes an eclectic mix of homes, some of which date back to the turn of the 20th century. However, much of the area’s housing stock was built in the 1920s and 1930s.

That stock has seen massive price growth in recent years. According to Redfin data, which was provided to Inman, in February of 2012 the median home price in the 78704 zip code was just $299,000. But by December of last year, the median sale price in the area had grown to $650,000.

Ryan Rodenbeck, the broker-owner of Austin’s Spyglass Realty, told Inman that the supply of homes in the area is extremely sparse, with just 11 days of inventory. He called the situation “unprecedented.”

Those numbers may also fail to capture the full scope of the situation. For example, as of late January there were 54 properties for sale in the neighborhood. However, more than 40 of those “homes” are merely “ready to build” — meaning they aren’t actually houses yet. The cheapest property currently on the market in the neighborhood is a 413-square-foot condo listed for $219,000. After that there are a few condos in the $400,000 to $500,000 range, but even units in multifamily buildings generally run more than $700,000 right now.

Rodenbeck said Bouldin Creek is attractive to buyers because it’s centrally located to downtown Austin, among other things, but still feels like a neighborhood filled with houses rather than predominantly condos as is the case across the river. However, he said that in practice people buying a single family home in the neighborhood right now are paying between “one and a half to two million dollars.”

In total — despite it being a neighborhood of single family homes — there were only a handful existing, standalone houses for sale in the entire neighborhood at the end of January. The most expensive was listed for $1.28 million while the cheapest appeared to be an 807-square-foot bungalow that was asking $733,333.

An image captured from Google Street View in late 2019 shows older homes mixed in with properties that have been modernized or completely rebuilt. Credit: Google

Speaking of tear-downs, because Bouldin Creek area has many older homes it’s also seeing a flurry of remodeling. According to Rodenbeck, for homes that are smaller than 2,000 square feet, the land is more valuable than the structure itself, meaning many people are either expanding homes, or essentially tearing them down and rebuilding something larger. ”

“Probably one out of every seven houses is either being demolished and rebuilt or added on to,” Rodenbeck added. 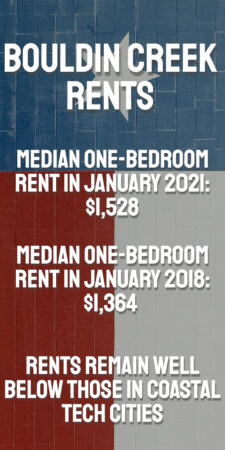 Rents are a useful metric that offer insights into an area’s trajectory because many new arrivals to a neighborhood will opt to rent when they first arrive. So, affordable rents can be a critical component for a city that wants to keep its star rising.

Zillow tracks rents using what it calls a “Zillow Observed Rent Index,” or ZORI, which draws on data from both the company itself and other sources such as the U.S. Census Bureau. That data, which was provided to Inman, shows that in the 78704 zip code the average rent for all kinds of units was $1,332 in January 2014. By December of last year, it had grown to $1,736.

Data that rental listings company Zumper provided to Inman further breaks down rents by specific neighborhood. That data shows that in Bouldin Creek specifically, median rent for a one-bedroom unit was about $1,364 at the beginning of 2018. By January of this year, the median rent had grown to about $1,528.

While these rents may seem high compared to some parts of the country, they are significantly lower than places like San Francisco, which according to the ZORI had a median rent of $3,364 in January. And that matters because Austin is increasingly competing against places like California’s Bay Area for jobs and economic growth generally.

The takeaway from all of this data is that this central part of Austin remains considerably more affordable than comparable neighborhoods in coastal cities.

Sponsored Content“Competition in real estate markets like Bouldin Creek continues to be exceptionally high with people fighting tooth and nail over limited inventory. In a tight market like this, a Verified Approval Letter from Rocket Mortgage, which verifies credit, assets and income up front, provides strength in multiple offer situations – even when competing with cash offers. With some homes receiving triple digit inquiries in just a few days, it is more important than ever to be as prepared as possible when placing a bid, and a Verified Approval Letter will make the offer truly stand out.”— Bill Banfield, Executive Vice President of Capital Markets, Rocket Mortgage 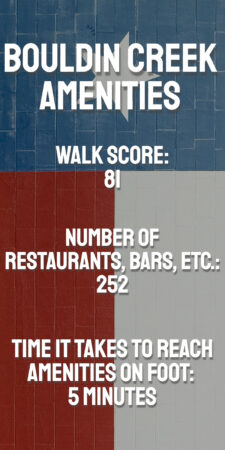 Amenities are more difficult to quantify than housing, especially during the coronavirus pandemic when many businesses have closed their doors. Still, this is an important component of what makes a neighborhood buzzy; while recent rankings have identified plenty of hot real estate markets, those that are in all-residential suburbs probably won’t be able to build a reputation as unusually exciting places. For that, neighborhoods need strong real estate plus things like bars, restaurants, clubs and cultural destinations.

Bouldin Creek appears to have both. For starters, the neighborhood has a Walk Score of 81 out of 100. Walk Score uses a rating system that evaluates neighborhoods based on how easy it is to do things like run errands and visit entertainment venues on foot. So, the more restaurants and movie theaters and bodegas a neighborhood has, the higher its score.

By comparison, Bouldin Creek’s Walk Score is on par with New York City as a whole, but lower than Brooklyn’s Williamsburg neighborhood, which has a rating of 96. Los Angeles has a walk score of 68.

The entire city of Austin has a score of just 41.

The takeaway is that Bouldin Creek is significantly more walkable than the overall surrounding region, and that it has a comparable concentration of amenities to other (in many cases larger) cities.

Walk Score further reveals that there are 252 bars, restaurants, cafes and related businesses in Bouldin Creek. Residents of the neighborhood typically can walk to an average of six such destinations in five minutes or less, according to Walk Score.

Beyond walkability, Bouldin Creek has a “transit score” of 54, which Walk Score describes as meaning it has “good public transportation.” Transit in the neighborhood is made up of roughly six bus lines.

Better still, Walk Score gives Bouldin Creek a “bike score” of 78, meaning the area is “very bikeable.” That significant because the pandemic has driven rising interest in biking, and because bicycle infrastructure is in some cases associated with rising property values. Bike lanes are also, for better or worse, sometimes associated with gentrification.

Rodenbeck actually has an office in the area, on South Lamar Boulevard. He said that’s where there is a cluster of restaurants and cafes. 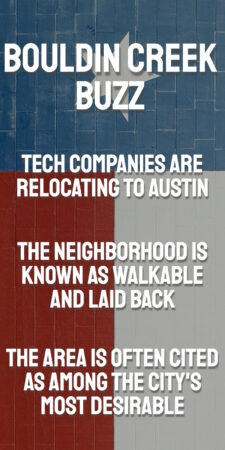 That Austin has received a lot of buzz in recent years almost goes without saying. For starters, there were the duel reports from Zillow and Redfin showing it would be a hot market. On top of that, there has been a steady stream of reports about technology companies moving to Austin.

The highest profile of these so far has probably been Oracle, which announced in December it was moving its headquarters to the city.

Austin also routinely shows up on lists of “best” and “coolest” cities.

Those kinds of lists are subjective, of course, but it’s significant that the city sits in the middle of the Venn diagram of both hip places, as well as those that have a exploding tech-based economy. That’s a powerful recipe. 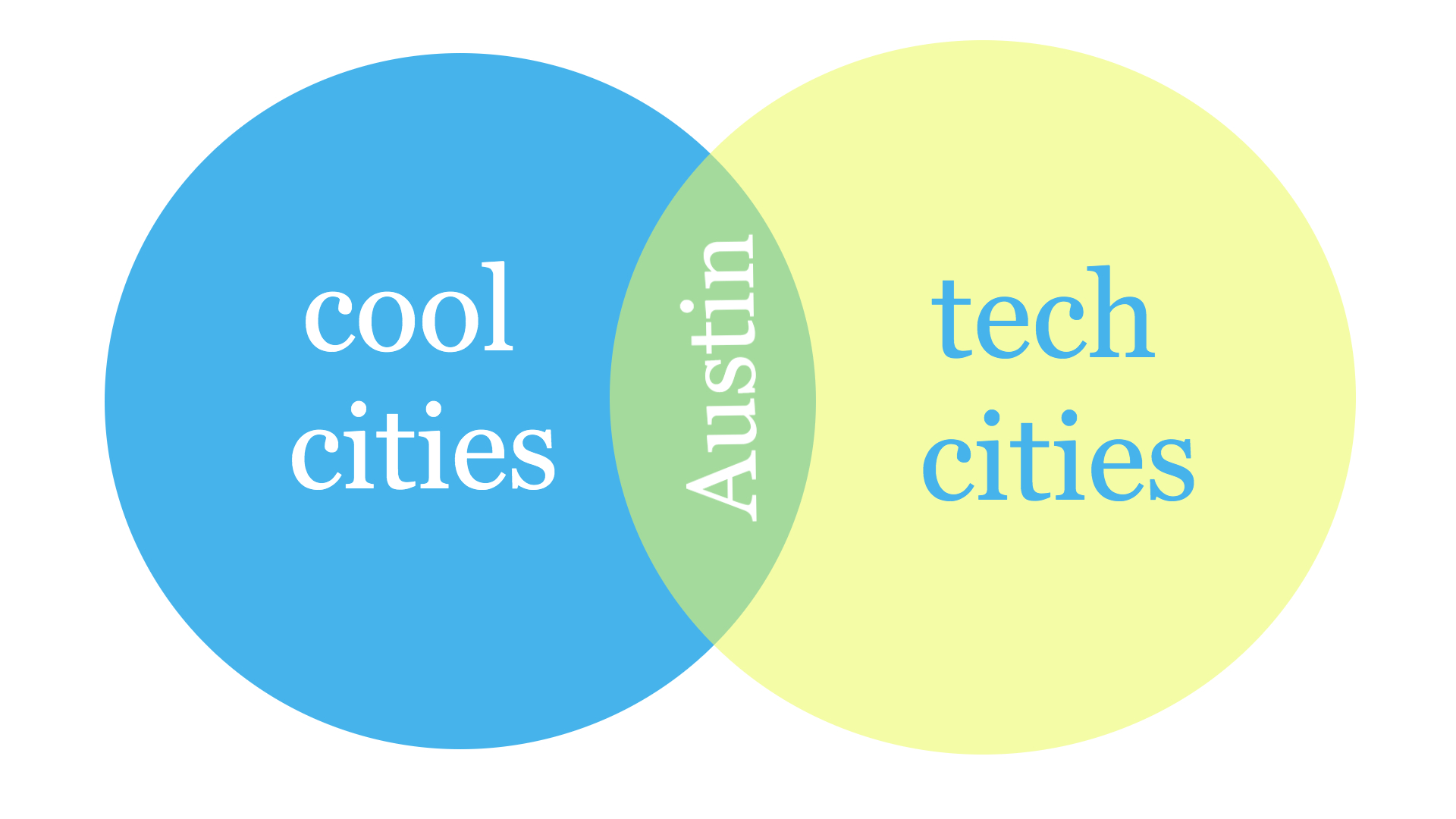 So what about the area around Bouldin Creek?

While much of the national attention has focused on Austin generally, when the city’s neighborhoods get mentioned, Bouldin Creek and the areas surrounding it frequently show up.

In 2017, for example, Thrillist called the area “sublimely laid-back” and a great place for food, art, and shopping. Other publications including Time Out have singled out the area as well, and recent years have seen celebrities such as Elijah Wood and (allegedly) Led Zeppelin singer Robert Plant put down roots there.

To be clear, there are a lot of desirable and buzzy neighborhoods in Austin, and the growing economy will likely mean that even more amenities keep springing up in more parts of the city.

But there does seem to be something special about the Bouldin Creek area. On Reddit, for example, the takeaway is that “you can walk to everything, and pretty much every major event.” And the Austin Relocation Guide, a website that offers tips on moving to the city, ultimately concludes that there “isn’t a more sought-after zip code” than 78704.