If it’s January, it’s Agent Appreciation Month at Inman. Join us all month to celebrate all that agents do, and come together with us virtually at Inman Connect, Jan. 26-28. Craving total access? Take advantage of our Agent Appreciation Sale and save 50% on your Select subscription.

This is the first in a two-part report on the results of Inman’s second-annual Agent Appreciation survey. Check back tomorrow for the final conclusions of the survey. 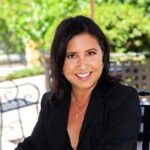 “I’m that girl who answers the phone at 4 a.m.,” Moraccini, a Rodeo Realty agent in the Calabasas, California, area recently told Inman. “I work between 40 and 60 hours a week. I love it. I welcome it.”

Like many real estate agents, Moraccini has over the last year seen her workload tick upward. In large part because of the coronavirus pandemic, more people have been looking to move in recent months, especially in Moraccini’s area just north of Los Angeles that has comparatively big homes and expansive yards. That has meant more deals that needed doing.

But even as the workload ramped up, Moraccini’s love of the industry hasn’t dwindled. If anything, it’s grown. “I think I’m woking more now than I was before the pandemic,” she explained. “It’s an exciting time to be in real estate.”

Moraccini’s view might sound paradoxical to people in other industries, where more work often translates into more headaches. But real estate is unique. Not only is work more directly tied to income in the business, it also appears to be tied to happiness. Which is to say, real estate agents seem to really like what they’re doing.

That, at least, is the takeaway from Inman’s latest agent appreciation survey. The survey launched on Jan. 11 and ultimately elicited more than 400 responses. Those responses touch on everything from commissions to healthcare, but one of the biggest takeaways is that agents are working a lot — and seem to be pretty happy about it.

For starters, a plurality of respondents, or 40 percent, indicated that they work seven days a week. Another 36 percent said they work six days a week, meaning that an overwhelming majority of people who took the survey are working over their weekends.

Equally interesting is that only 17 percent of respondents indicated they work five days a week — which of course is the standard in most other professions. 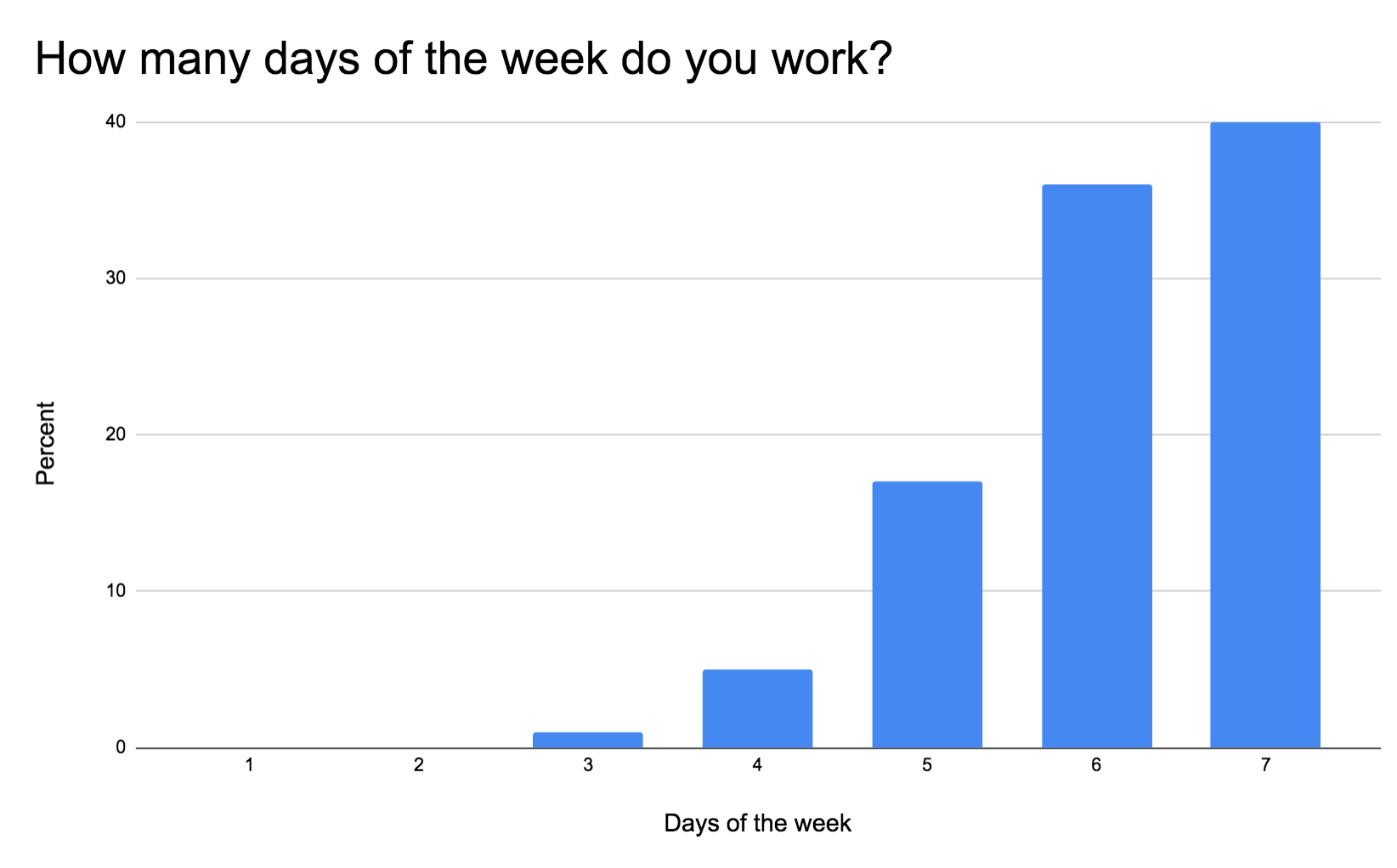 These results diverge slightly from last January, when Inman ran a similar survey. Though the results of that survey also showed agents were working a lot, a plurality of respondents at the time indicated they were working six days a week, not seven.

Neither year’s survey was scientific, with respondents self-selecting, but assuming they both drew from a similar pool of Inman readers, the results suggest more industry professionals may be working more days of the week than they used to.

Unsurprisingly, given how many days agents are working every week, they also reported putting in long hours. A majority of respondents in this year’s survey, or 51 percent, said they work between 40 and 60 hours per week. Another 22 percent indicated they work more than 60 hours. Combined, that means nearly two thirds of respondents are working at least or more than what is normally considered “full time.” 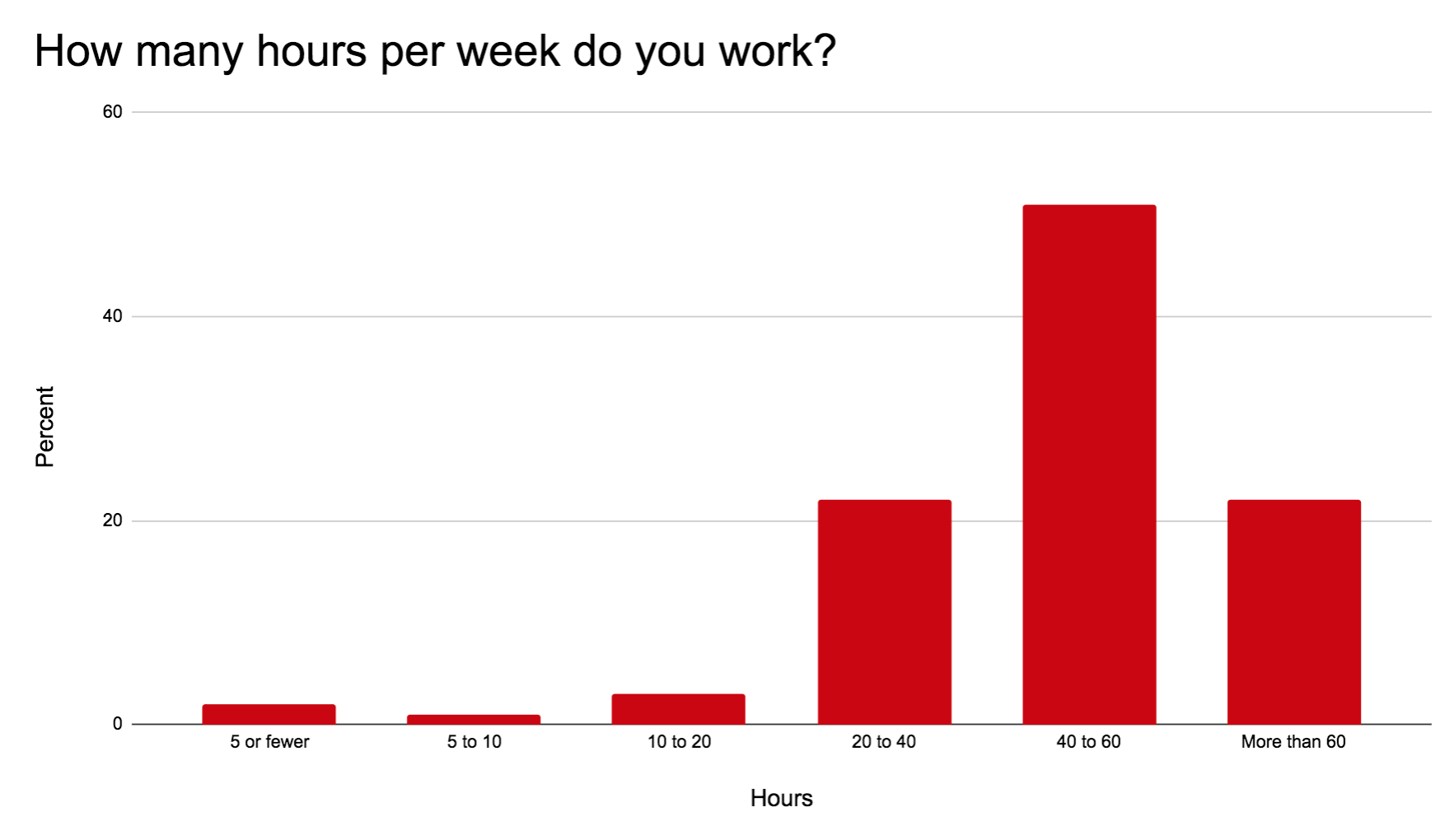 The takeaway from these responses is that a significant number of real estate professionals are out there working seemingly non-stop.

There’s also a gap between that reality and what they’d prefer; when asked how much they’d like to work, a large plurality, or 47 percent, of respondents said just five days.

So it’s clear that aspirations and reality aren’t quite aligned here. 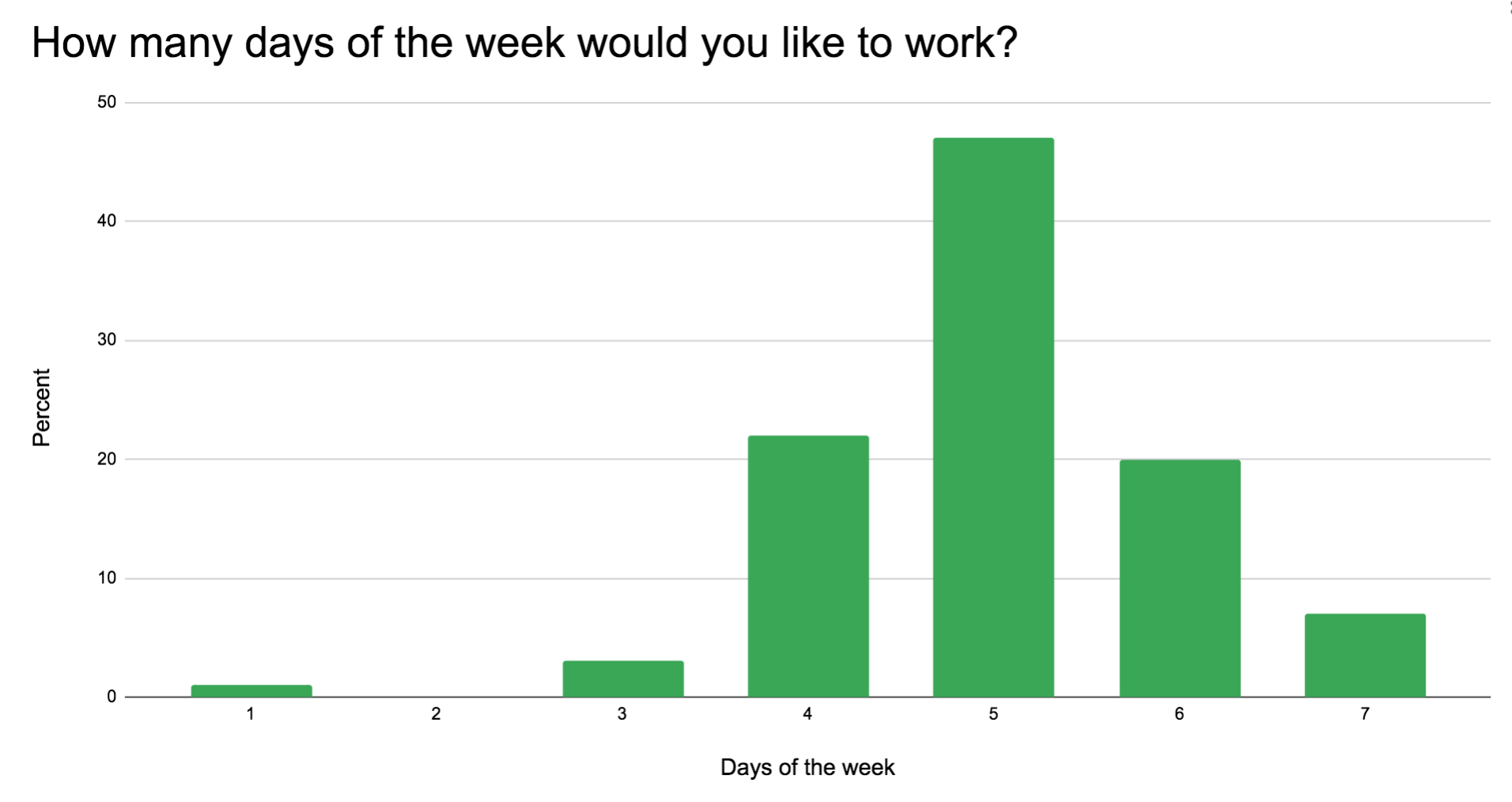 These results are similar to last year’s survey, when respondents indicated they were “most happy” to be at work five days a week.

However, one of the more surprising takeaways this year is that despite the long hours and apparent desire to work fewer days, most people are very pleased with their careers in real estate. For example, the very first question in the survey asked agents to rate their satisfaction with their careers on a scale of one to five, with five being the best. An overwhelming plurality, or 42 percent, selected five — indicating they are as satisfied as they could possibly be. 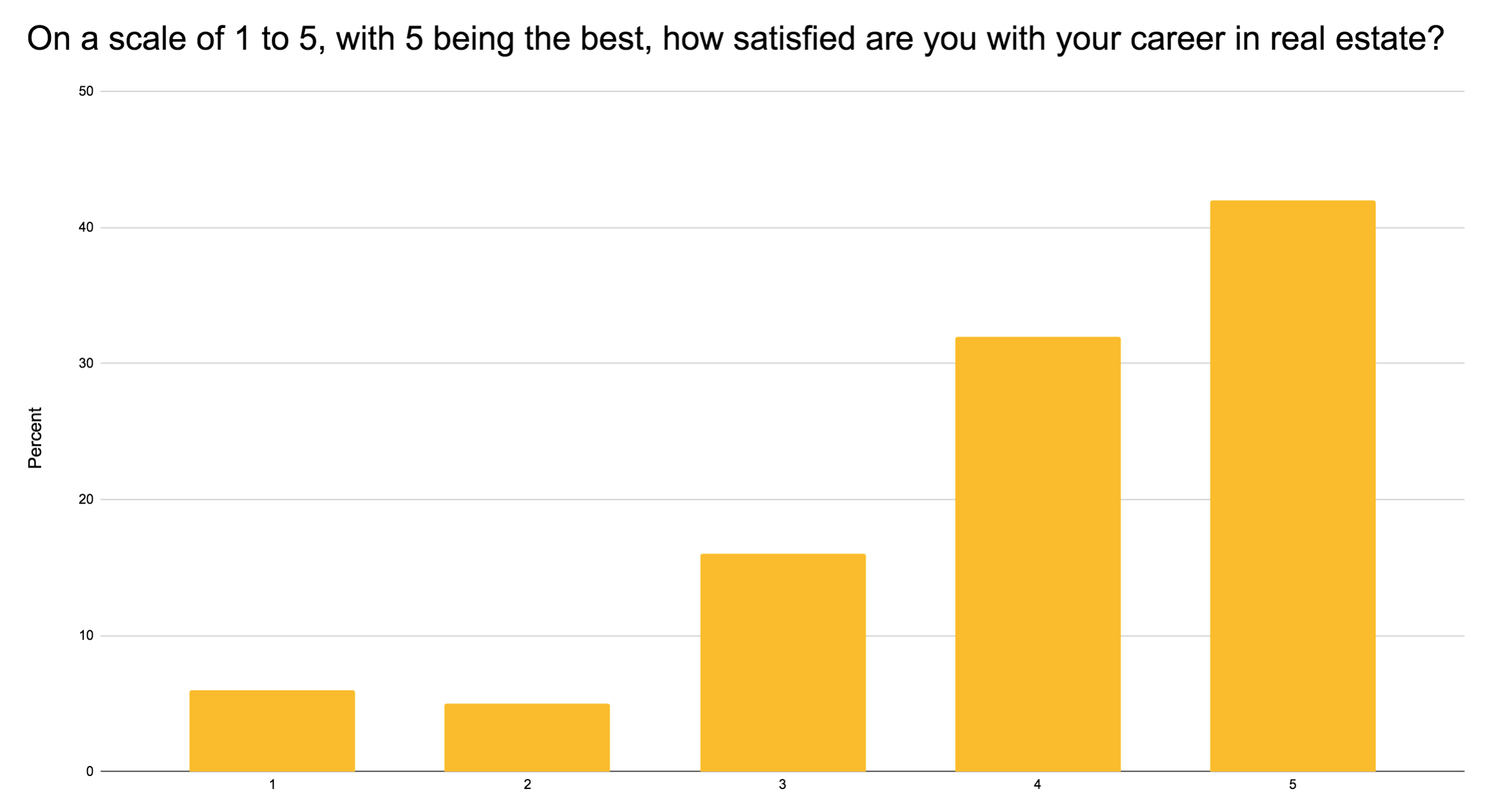 Obviously it would make sense that the results would skew toward higher levels of satisfaction. If people are deeply disappointed with their careers, they’ll probably move on. But that also doesn’t mean so many respondents were necessarily going to select the absolute highest level of satisfaction; it’s conceivable that agents could have moderate levels of satisfaction while not trying to move on to other jobs.

Only 3 percent of respondents selected the lowest rating when asked about happiness with their work life balance. 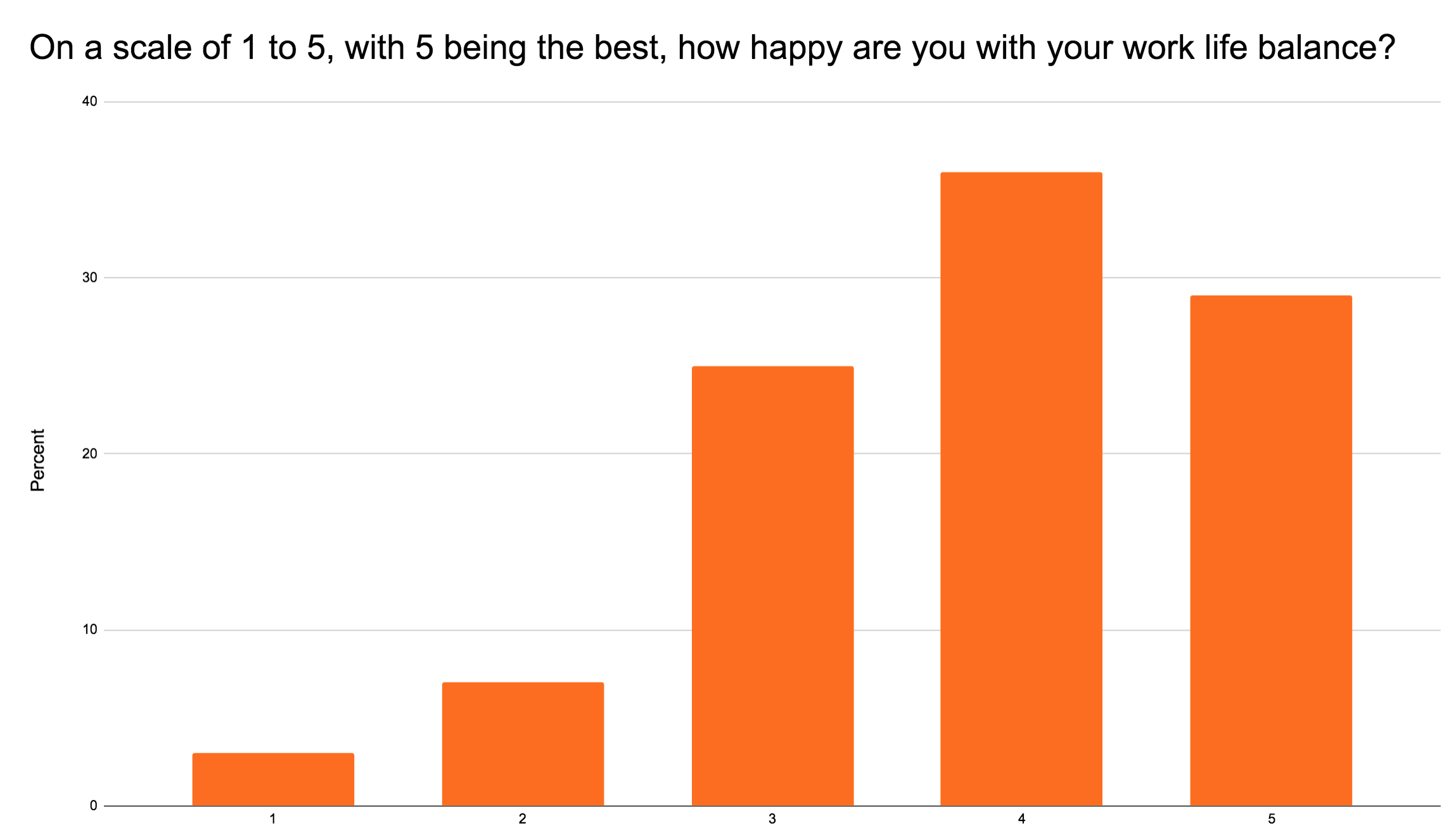 These responses indicate that there is room for improvement when it comes to work-life balance, though there nevertheless appears to be an overall sense of satisfaction on the issue. And that’s rather remarkable given how much time agents are spending on their jobs.

Finally, the survey also asked agents if they could do it all over again, would they still go into real estate. On this question, the results weren’t even close, with an overwhelming majority, or 81 percent, responding that they’d choose the same career. 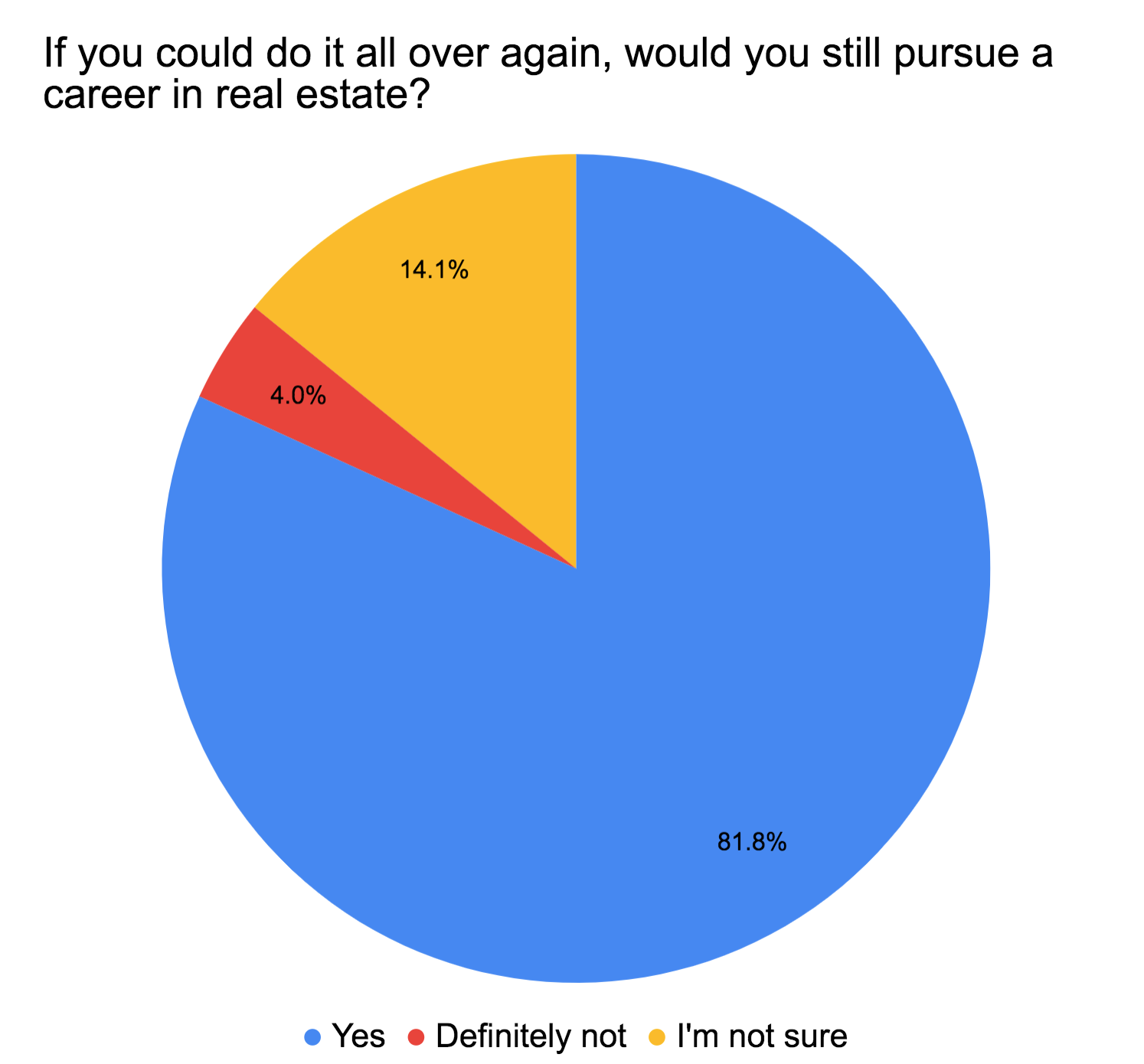 It’s also significant that survey respondents have indicated these high levels of satisfaction despite the pandemic that has ravaged the U.S. and other countries over the last year.

Certainly the housing market’s strong recovery helped many agents’ bottom lines, but more money doesn’t automatically translate into satisfaction with intangible things like work-life balance. Which is to say, agents seem to be happy with their careers in ways that go beyond just doing more deals amid their clients’ COVID relocations.

So what gives? Why are agents apparently so happy with their professional lives even when they have to work so much?

For the most part, it seems to boil down to agents simply enjoying the work they do.

Moraccini, for example, said that most members of her local real estate community are “running ourselves ragged.” At the same time, the people she knows like it that way. They chose the lifestyle, and while it can be grueling, the perks outweigh the challenges.

In Moraccini’s own case, she switched to real estate four years ago after a first career in diplomacy, and she has no regrets.

“I think it was the best choice I’ve ever made,” she said. “I wish I would have done this a long time ago.”

Other survey respondents had a similar perspective. Bill Fooks, who leads a Coldwell Banker team in Rhode Island, told Inman that he probably works between 10 and 12 hours a day. On average, he’s also probably working five and a half days a week. But, much like Moraccini, that’s the way he likes it.

“My days still look pretty full,” he said. “And I enjoy having it full.” 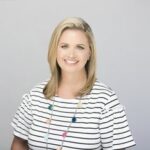 Heather Scott — an agent with Forest Hill Real Estate in Ontario, Canada, who also took the survey — said that while real estate work can take up a lot of time, she has more flexibility than she might in another job. That’s a big draw for her, as is the chance to help people with important moments in their lives.

“What I really enjoy the most is it’s such an emotional transaction for people,” she said, adding that in her market, there are many people buying second homes and cabins, which is exciting for them. “There’s just something about that that’s really enjoyable.”

Scott also likes the fact that her income is tied to the amount she works, which might not be the case if she had a more conventional salaried job, and that each day she ends up doing something different. Ultimately for her — and presumably for many others who took Inman’s survey — these unique features of the real estate business far outweigh having to work long hours or more days per week than people in other careers.

“I’d rather work 80 hours a week doing this,” Scott concluded, “than 40 hours doing something else.”

Zillow’s Shift To IDX Is Live. Here’s What Agents Need To Know

By admin
45 mins ago