See how Russ Leno is pursuing his passion in the place he truly calls home.

‘It would be boring if we all did the same thing’

When he started whittling for fun in his 20s, Russ Leno didn’t know he would one day carve the world’s largest pumpkin.

“I started honing my pumpkin-carving skills because I could be at home with [my kids],” the master sculptor explains.

A design engineer by trade and an artist by heart, Leno relished the days when everything was done by hand. But over time, computers started taking over the job, and he needed a new outlet.

First he started sculpting sand because his friends were doing it, and then he tried his hand at carving snow and ice. Pumpkins were an afterthought.

“It was somebody’s turn to have a party at their place, and they ran down to the store and got pumpkins,” he explains. “It was so much fun to carve in the new style we were starting.”

Leno describes his style as “creating a scene on a pumpkin,” but that’s an understatement. From a 1,200-pound mechanical piranha to a medieval castle and dragon, Leno’s Halloween creations are as imaginative as they are complex.

“It would be boring if we all did the same thing,” he says. “Just like people who play music, you wouldn’t want to hear the same style over and over again.”

Over the past 25 years, Leno’s hobby has grown into a professional endeavor. He’s traveled all over, carving for wineries and even a vice president.

His workspace has also grown.

“When I started out, I just used a table in the kitchen,” he explains. “Now I have this shop, where I have a lot bigger space to store my stuff and put my tools. It’s comfortable. You can move around and not have to worry about a mess being made inside your home.”

A work in progress, Leno’s shop is housed in a large garage behind his new lake house in Shelton, WA.

“I think if you have a passion for something that you love to do, you’ll make some type of area or space to do it in,” he says. “It’s important that you have some space that you can set up and then leave and come back to.”

Leno moved to Spencer Lake this summer and plans to retire there.

“I’ve looked all around the Northwest, and I’ve never found anything that I’ve liked better than being down here in the south [Puget] Sound region,” he says. “It’s just beautiful down here.”

When he’s not carving, he takes his boat out on the lake or works in the yard. And he’s always thinking of ideas for his next Prizewinner.

“It’s quiet compared to where I’ve been before,” he says. “It gives my mind more room to think.” 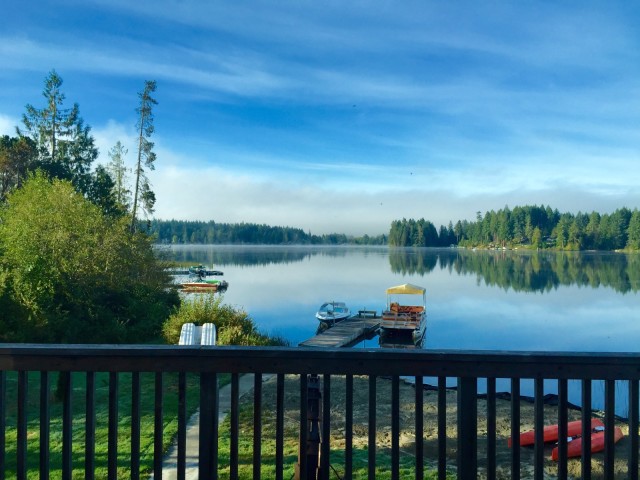 A brown A-frame with a second-story deck, the house is filled with warm wood, walls of windows and Leno’s carvings.

“Life throws a lot of things at you, so to get your dream place is something I never thought I’d have,” he says. “You pinch yourself.”

This Isn’t Your Average Woodland Cottage

Step Inside the Castle a Dad Promised to His Son