Not having the best agent experience when he bought his first home “lit the fire underneath” Jared Housier and inspired him to make the process better for other buyers.

Jared Housier hasn’t been a real estate agent for too long — just about five years — but the RE/MAX First Southern Homes Team leader has already become a top producer in his market in Southern Indiana, just across the Ohio River from Louisville, Kentucky.

Housier was inspired to get into real estate after he had a less-than-ideal experience buying his first home a few years ago and realized the process could be much improved.

“The agent that I had wasn’t necessarily the greatest, and I saw a lot of room for improvement there,” Housier told Inman. “[I thought], ‘You know what? We could really make something work very well for people by implementing a very good process.’ So that lit the fire underneath me and the rest is history.”

Housier, who leads a team of four that includes his wife Olivia, said he thought the team’s efforts with marketing, especially through social media, have helped them become successful agents in their area.

“We’ve been very keen on social media and having a great presence there,” Housier said. “With our listings, we’ve tried to be on the cutting edge of things with rolling out 360-degree virtual tours and listing videos for our properties, which has really helped make a name for ourselves.”

Too often, Housier said, real estate agents end up using social media as a feed for nothing more than listing videos. Instead of falling into such a pattern, Housier tries to make his social media posts more engaging and interactive. “We try to get outside of the box,” he explained.

One recurring social media activity Housier likes to do is create a real estate trivia game on Instagram that both poses and debunks common questions Housier’s clients have, like the common buyer myth that buying a house requires a 20 percent down payment.

Another big part of Housier’s social media strategy is showcasing local businesses. “A huge thing for us is the community we live in because that’s one of the biggest reasons people buy there,” Housier said. “What is it like to live in that area? So we like to showcase local businesses and parks and things of that sort.”

As with all real estate agents, it’s been a challenge for Housier and his team to continue to connect with their clients on the same level as they did before the pandemic. But they’ve been doing their best to get creative and still show their appreciation.

“Around Thanksgiving time, a lot of times we would have a ‘pie day giveaway’ where we would have everyone together for a Thanksgiving meal,” Housier said. “But instead of doing that this year, we did a similar event, but we turned it into a drive-thru situation. So people would drive through to get their pie to take home for their family for Thanksgiving, and we’d have a meal to-go for them. That way, everybody’s safe but still being engaged with.” 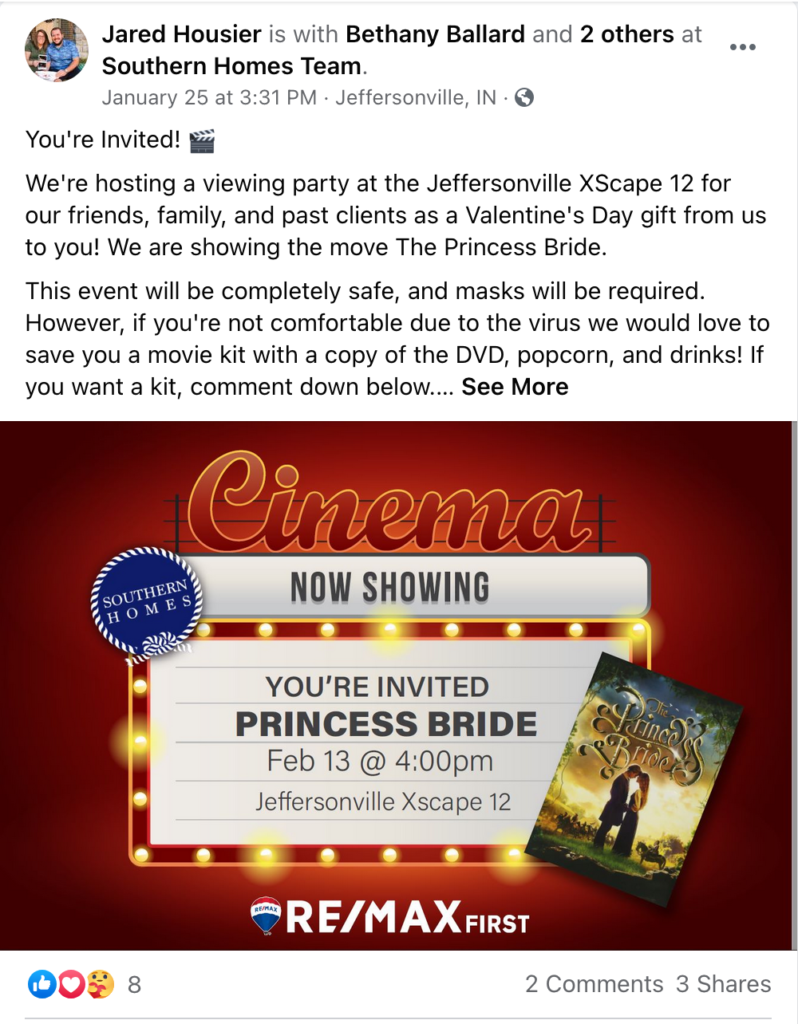 The team is renting out a movie theater for the showing and will be hosting a limited number of guests to comply with social distancing, but they’re also offering movie kits with the DVD, popcorn and drinks to clients or friends who don’t feel comfortable being at an in-person event.

In addition to their focus on marketing and social media, Housier said his team’s dedication to participating in a real estate coaching group and staying in touch with their sphere of influence have done wonders for the business.

“I think, honestly, the biggest thing that’s helped us is just growing the business side of things and having structure to everything,” Housier told Inman. “We’ve done a lot of that through our real estate coaching programs, which has been huge, very huge for the team. And we’ve taken a huge focus on building our sphere of influence and having, essentially, monthly touches [with them]. The biggest thing is consistency with follow-up with our top 50 in our sphere of influence.”

At the end of the day, Housier said the most rewarding part of his career in real estate has been the fact that he gets to do something he loves and is passionate about every day that also helps other people.

“So many people, they don’t like what they do, but they go because it’s a good paycheck,” he said. “But at the end of the day, I don’t feel that way because every family we help, it changes people’s lives.”

What Agents Should Know About Over-55 Communities