Inman events bring together the real estate community to network, learn and grow. Join us for our next 2 virtual events: Connect Now on December 17 and our flagship Inman Connect January 26-28 to stay connected and stay ahead. Learn more and reserve your spot.

Along with highlighting the disparities in healthcare, the coronavirus shone a spotlight on millions of Americans struggling to access safe and affordable housing, reliable work, adequate wages, and much more. In response, countless real estate agents and leaders stepped up to provide hope and aid to their struggling colleagues and community members.

As we head into the holiday season, even more people are thinking of ways to get involved and make an impact on their communities. True Houston Real Estate founder Nicole Lopez Cummins and Coastlands Group Real Estate broker-owners Eric and Janet Baucom told the Connect Now audience about their initiatives and shared how to start one of your own.

For the Baucoms, the transition from working with RE/MAX to starting their own independent brokerage led the couple to think of ways to be more intimately involved with non-profits in the Ventura, California area.

“We wanted to have an impact on our community, Eric said. “The idea being in real estate [is that you help someone] change a home, but how could we make that where you change a life too? ”

“We decided that as part of our goal was to give back a percentage of our commissions to a non-profit within our community,” he added. “Giving back is a chance to invest in our community.”

Eric and Janet immediately turned their attention toward children in foster care and wanted to brighten their holidays with new bicycles. The couple started by purchasing a handful of bicycles and contacting foster homes to get nominations of children who needed a bike. However, the couple got an overwhelming response — much more than the small collection of bikes they had.

“We got all these heartwarming requests and we realized we needed to get bikes for all of these kids,” Janet said. 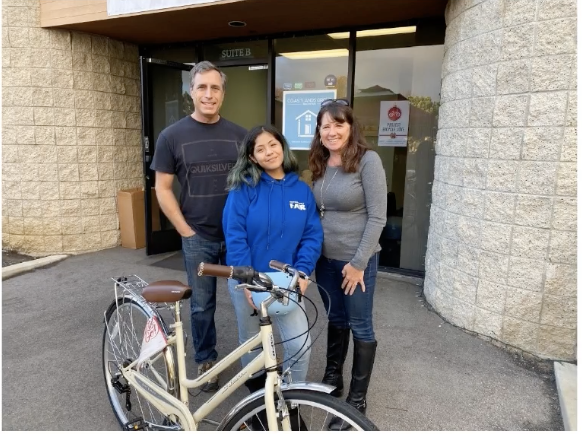 A picture of the Baucoms and one of the bike recipients.

The couple named their initiative Project Bicycle Love and began asking for help from colleagues, fellow brokers, community members, and anyone who’d be willing to help. A bike manufacturer donated boxes of unassembled bikes, and the couple hosted a community bike building event to assemble bikes and package other donated bikes.

“A lot of these kids, this is their first bike,” Janet said.  “We don’t take used bikes because we want it to be special.”

Meanwhile, in Houston, True Houston founder and Side partner Nicole Lopez Cummins has dedicated most of her year to two initiatives, Texas Festival Vendors and Texas Relief Warriors.

As explained in a previous Inman article, the True Houston broker co-founded Texas Festival Vendors after the city officials canceled the three-week Houston Livestock Show and Rodeo. Vendors shared their stories with local TV reporters, saying the rodeo was their main source of income for the year and didn’t know how they’d survive until the lockdown ended.

The group quickly ballooned to 30,000 members in three days, which has grown to more than 170,000 members and 200 vendors since March. Then, Lopez Cummins and Adams expanded their efforts and formed the Texas Relief Warriors to help community members weather an unusually robust hurricane season.

Some of the items Texas Relief Warriors sent to a fire battalion in Louisiana.

“I don’t sleep, Joe,” Lopez Cummins said with a laugh in response to moderator Joe Rand’s question about how she does it all. “There’s a lot of makeup to conceal what’s going on.”

“We have a joke that we do rescue cross-fit so we don’t have to go to the gym,” she added in reference to Texas Relief Warriors. “This is the hurricane season that won’t stop for us.”

Since August, Lopez Cummins’ team has sent 27 truckloads of supplies to Texans and Louisianans, all of which she and two other women organized and loaded. They also sent 50,000 bottles of water to hurricane victims and are currently planning a Thanksgiving turkey and Christmas tree giveaway.

“Seriously, you have to be an expert in time management,” she explained. “But, we’ve had a tremendous response from our partners across the country who have supported us.”

The Baucoms echoed Lopez Cummins’s sentiments and said Project Bicycle Love’s success is a matter of the couple “putting their heads down” and dedicating every extra hour to helping the foster children in their community.

“It was a grassroots thing,” Eric said. “The second year, we didn’t know if we were going to do it again but we had bike shops calling us and we had the county calling us about doing it. Even the volunteers wanted us to do it again.”

“It’s a matter of putting our heads down and going,” he added. “We started off small and every year it’s started to grow.”

Although they don’t do it for accolades, Lopez Cummins and the Baucoms said their philanthropic efforts have boosted their businesses and their reach.

“I take back to the law of reciprocity,” Lopez Cummins said. “As Realtors we’re called to be pillars of our community.”

“When you step up, the community takes that well and it helps your business,” she added while noting she’s experienced a measurable increase in business and referrals. “You should invest in the community that’s investing in you.”

Meanwhile, Eric said people have told the couple they chose to work with them “because you give back.”

For those who are struggling with when and how to get started, Lopez Cummins had one piece of advice: “Don’t be afraid to put yourself out there and don’t be afraid to be a pillar in your community.”

Finish out the year strong. Join us for Connect Now December 17 and our flagship Inman Connect January 26-28. You’ll collaborate with your peers, learn skills and strategies to boost your business, and plan for a year ahead that is likely to be anything but predictable. Reserve your spot now.

What Is Brex Cash, and How Does It Work?

By admin
57 mins ago

What Real Estate Agents Need To Know About Stair Lifts

80% Of Real Estate Brokerages Operate From One Office: NAR

What is Strategic Asset Allocation? How to Balance Your Portfolio for the Best Returns